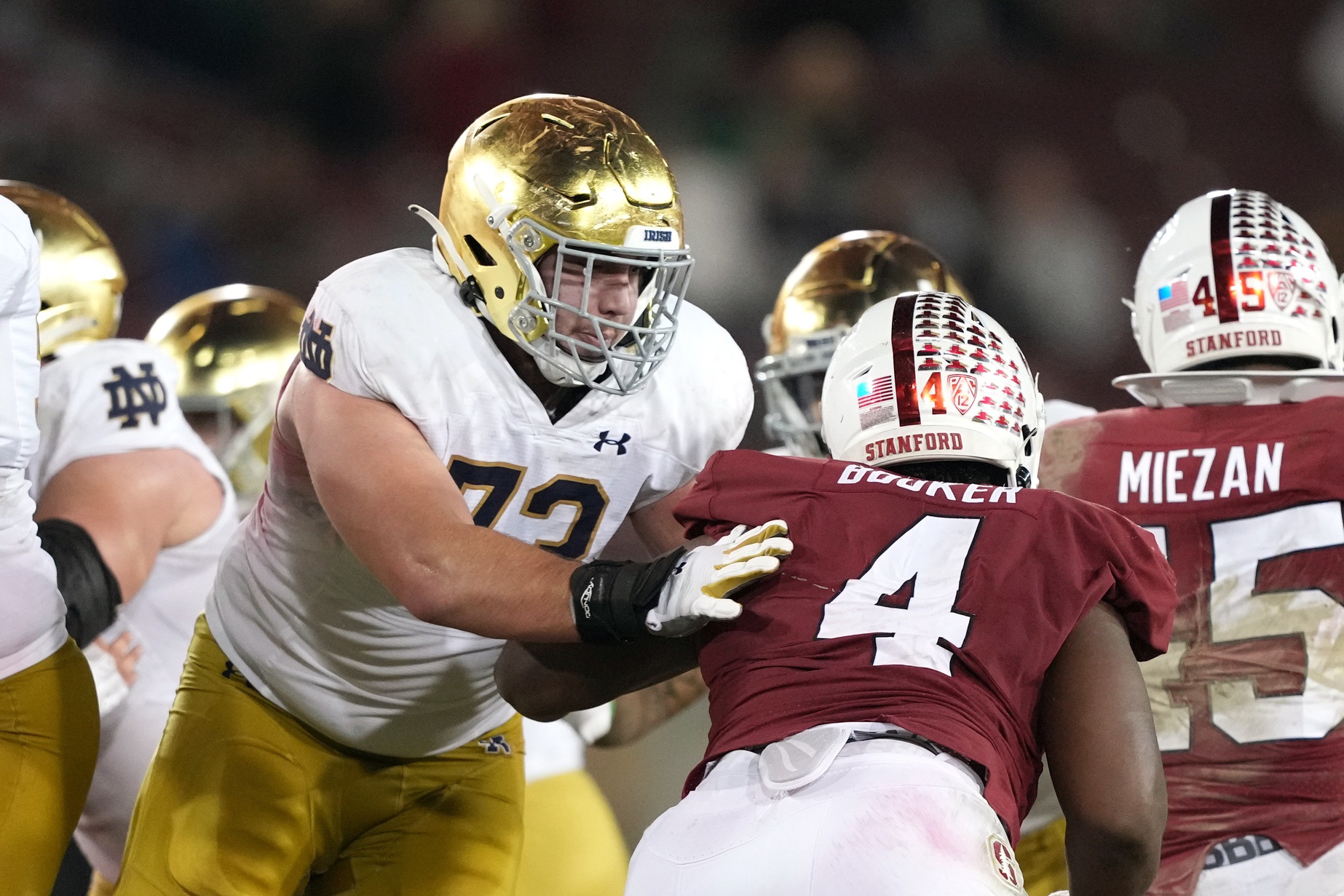 Booker has good flexibility and change of direction skills. He isn’t the type of player to corner and bend around the arc, but he has enough flexibility in his ankles to flatten and get to the quarterback. He has very good lateral agility in pursuit in the run game and he is very hard to shake in the open field.

Booker is a highly versatile player who has played multiple spots on the defensive front. He has played 0, 1, 3 4i, 5, and outside edge for Stanford and has done a good job at each spot. While he is a bit of a tweener in my eyes, lacking the explosive quickness to win off the edge consistently and lacking the stout anchor inside, the fact that he can play multiple spots should allow him to find a spot in a rotation early in his career.

Stanford’s Thomas Booker is a versatile defensive lineman who can be a disruptive player versus the run and the pass. Booker is a four-year contributor for the Cardinal, playing a variety of roles. He has aligned all around the defensive front, playing anything from 0-technique all the way to 9-technique. He is a good overall athlete with good lateral mobility and change of direction. In the passing game, Booker flashes an excellent first step to get upfield and stress offensive linemen’s edges. He has good length and demonstrates above average hands when rushing the quarterback. Booker can win with a bull rush when converting speed to power and has a nonstop motor. In the running game, Booker primarily wins with quickness and by using his long arms to stack and shed off blocks. He isn’t the most stout at the point of attack and can get pushed back at times. His best roles will either come as a 3-technique in a 4-3 or a 5 or 4i in a 3-4. His versatility and disruptive upside will be attractive for evaluators, but his lack of top-end power and strength may limit his ability to be a full-time player at the next level.

First Step Explosiveness: Booker has excellent first-step quickness. He explodes off the ball and fires off low with good leverage. His quickness off the snap places a lot of stress on opposing offensive linemen and his upfield penetration is impressive as a rusher.

Hand Counters: For a player who has played a ton of snaps in his collegiate career, Booker doesn’t utilize a ton of hand counters and secondary rush moves. Booker has quick hands and a firm punch but once his initial rush gets stalled he lacks the ability to pivot and too often relies on power. If Booker can continue to work on his hands and rush moves, his consistency as a rusher will only improve.

Run Defending: Booker is an above average run defender who is at his best when he is shooting gaps with his quickness and length inside. When he is forced to attack double teams or set maintain gaps, he is oftentimes washed down the line of scrimmage and loses gap integrity as he simply doesn’t have the anchor nor power to hold firm. He displays very good processing ability to read blocking schemes and has very good range working down the line.

Effort: Booker’s motor is always running and he plays the game the way it’s supposed to be played. When you watch Booker, there are plenty of times you’ll see him 20 yards down the field chasing the play and making the tackle. Additionally, as a pass rusher, he never stops fighting and will work to uncover through the whistle.

Football I.Q: A standout academic at Stanford, it is not surprising that Booker’s IQ translates well to the football field. He is quick to diagnose blocking schemes and is always in good position to avoid being trapped. He can sniff out screens and draws and takes very good angles to the football.

Lateral Mobility: For a man his size, Booker has very good lateral mobility. He flows down the line of scrimmage in pursuit and has excellent range. He is light on his feet and can change direction with ease. A multiple-sport athlete in high school, Booker’s lateral mobility and foot coordination are certainly strengths.

Core/Functional Strength: Booker has just above average strength at the point of attack. There are times you’ll see Booker come off the ball hard, fire his hands, extend his arms, and anchor against the run. But more often than not, Booker loses gap integrity in the run game simply because he gets pushed off the ball by stronger offensive linemen. He needs to continue to work on his strength and anchor if he is going to have a chance to succeed at the next level.