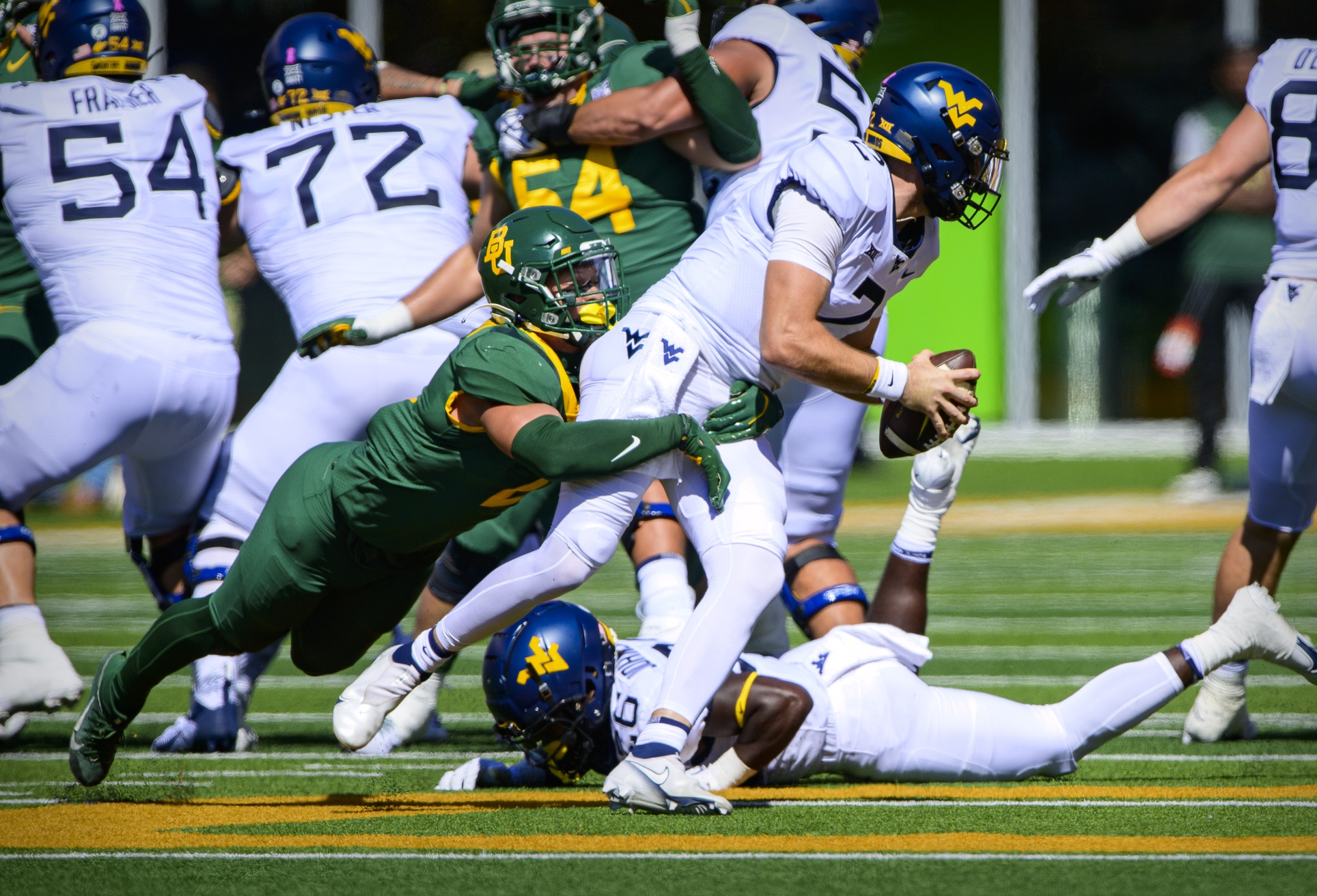 Bernard’s on-field presence adds energy. He celebrates with teammates when big plays are made. At times, he is directing traffic pre-snap and communicating calls to his front. Leads by example as a key cog for this defense and he is more than willing to play special teams.

Bernard is a twitchy and easy mover. He keeps a square base with light feet to cover ground across the formation and sideline to sideline. Bernard scrapes laterally and is able to cover multiple gaps.

Bernard profiles as a constant contributor in pass coverage. He transitions well from a backpedal to a zone turn to match routes. His speed helps him cover ground and disrupt passing lanes. He comfortably mans slot receivers, running backs, and tight ends in coverage.

Terrel Bernard was a 3-star recruit out of La Porte High school. Bernard was an all-state linebacker. According to 247 Sports, he ranked as the No. 66 OLB and No. 141 player in the state of Texas. In 2019, he was named First-Team Academic All-Big-12 and Second-Team All-Big-12. He is an undersized LB that excels because of his range and abilities in space. He has an explosive trigger after locating the ball-carrier. He adds coverage versatility with the ability to diagnose route combinations. His size limitations raise concerns about holding up against the run at the next level. He has a fair share of missed tackles in 2021. He struggles to detach from blockers once the OL has latched onto him. When kept clean, he scrapes and makes plays on the ball.

Tackling: Bernard displays inconsistency as a wrap-up and form tackler. He drops his head and dives at the ball-carrier’s lower body. He squares up his target and rolls through his hips. Being undersized, he does not deliver a powerful blow as a tackler in the box. On the move with a running start, he strikes with physicality in space. 15 missed tackles charted this season.

Football IQ/Instincts: Bernard identifies blocking patterns and adjusts his path to the ball-carrier. He diagnoses run, locates, and triggers downhill to the football. He patiently reads and diagnoses plays before using his athleticism to make a play.

Competitive Toughness: Ultra-competitive linebacker. His lack of size does not prevent him from attacking blockers with physicality. Bernard is a tone-setter for the Bears’ front seven. Due to his size, he is out leveraged often against opposing OL. He is relentless in his approach to shed and disengage from blocks. He does not lack the confidence to stick his face into the fire as a box defender.

Run Defending: He’s an active participant as a run defender. Athletically, he attacks the LOS with patience and physicality. A flat-footed reader, Bernard uses his twitch and explosiveness to surge into the action. He diagnoses blocking patterns and the ball-carrier’s path to fill or flow. His inconsistency as a tackler in the box raises concerns about his effectiveness on early downs.

Block Deconstruction: Bernard’s lack of mass and power is evident as a block shredder. He is unable to disengage once the OL has latched on. He uses his speed and quickness to slip blocks. Given a head start, he uses a two-hand press to generate enough momentum to affect the OL’s balance.

Flexibility: Bernard has loose and fluid hips. He can flip and transition from stationary to on the move. He can drop his weight and quickly dip underneath blocks.

Leadership: Bernard’s on-field presence adds energy. He celebrates with teammates when big plays are made. At times, he is directing traffic pre-snap and communicating calls to his front. Leads by example as a key cog for this defense and he is more than willing to play special teams.