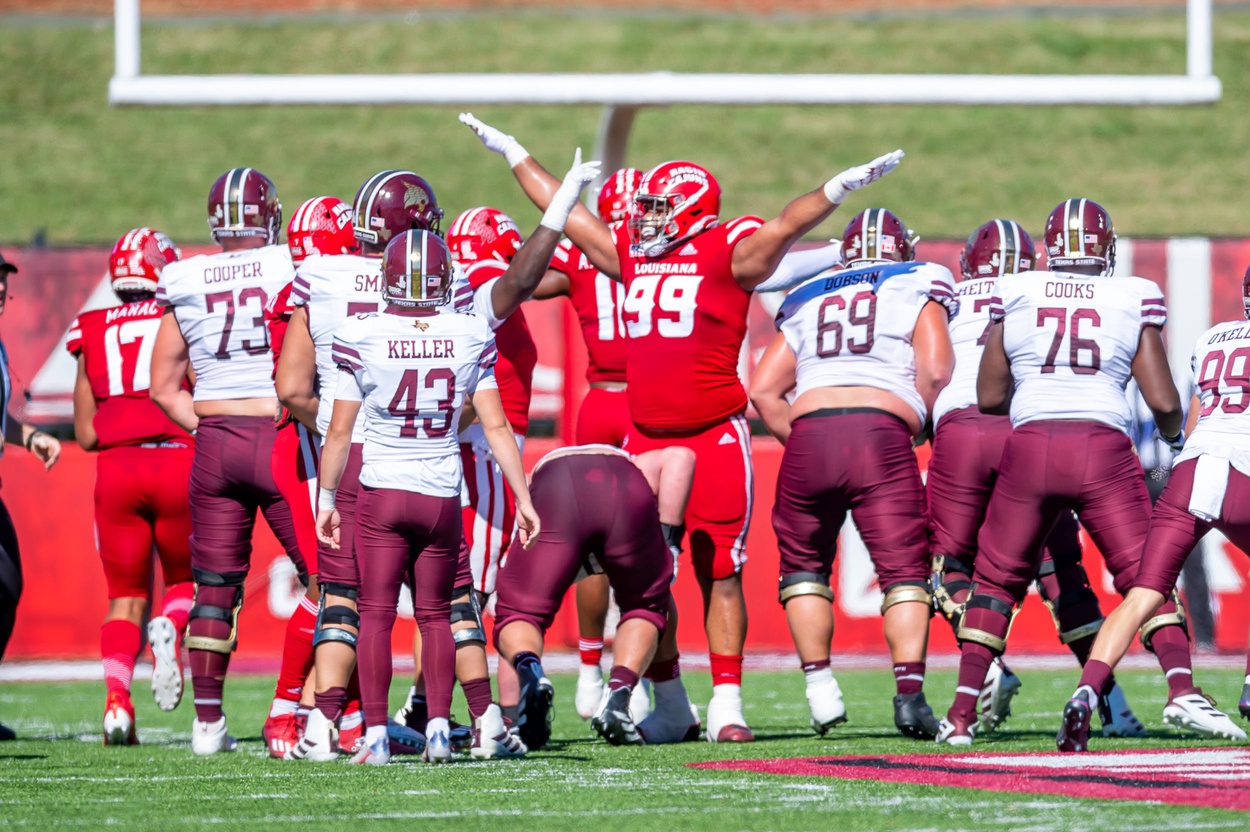 Tayland Humphrey is a former 4-star recruit that had originally attended JUCO out of high school. After JUCO, Humphrey attended FIU before transferring to ULL. Humphrey is a big-bodied defensive lineman that just simply overwhelmed his Sun Belt opponents. Humphrey showcases good strength and can easily convert speed to power to collapse the pocket. Humphrey is a one-gap player that can use his strength to maintain good gap integrity on the interior of defensive lines. While Humphrey shows good strength on the next level, Humphrey will need to improve his pass-rush repertoire to become a more effective pass rusher. Early on in Humphrey’s career, he should be primarily utilized as a run defender until he can develop pass-rush moves and eventually become a three-down player.

Ideal Role: Can play the shade or the 3-tech

First Step Explosiveness: Humphrey has a quick first step that he uses on occasion to get backfield penetration. When it is predetermined, Humphrey can come off the line quickly and penetrate gaps to affect run plays. He uses a rip move that becomes effective because of his ability to convert speed to power and overwhelm offensive linemen.

Flexibility: Humphrey looks to have some stiffness that affects him in multiple ways. Humphrey, at times, fails to get good knee bend, which gives him poor leverage and results in him being knocked off the ball. Also, his flexibility affects how well he moves laterally on run plays.

Hand Counters: When it comes to hand usage, Humphrey is very active, he just needs to improve on his effectiveness. Humphrey engages in battle but his hand maneuvers don’t help him defeat the blocker. He can benefit from working on this skill and honing in on when and where to execute each hand maneuver.

Hand Power: When Humphrey decides to shoot his hands in a deliberate manner, he can really affect offensive linemen. He has heavy hands that, when placed properly, can knock the offensive lineman backward. His best example of that is how he uses his two-hand swipe maneuver to forcefully disengage from blockers.

Effort (Motor): Humphrey shows good effort. He will turn and run 10-plus yards to pursue the ball-carrier. For a big guy, he showed the willingness to hustle to the football and usually pursued ball-carriers even if the play was not to his side.

Football IQ: Watching Humphrey’s film, there wasn’t any glaring lack of football knowledge. He always seemed to be in the right place and fully understood gap integrity. If anything, he can use more instincts as a pass rusher but that can come with technique improvement.

Lateral Mobility: Humphrey’s stiffness really affects his ability to move laterally. On zone stretch runs, his lower-body stiffness shows and it limits how much he can move laterally. Humphrey struggles to run with offensive linemen who are running stretch plays and attempting to reach-block him.

Core/Functional Strength: Humphrey displays good functional strength. He shows this strength in how he can press offensive linemen off of him and disengage. He also shows his strength when he can convert speed to power when rushing the passer and collapse the pocket.

Versatility: I do not believe this player offers much positional versatility. He is a limited athlete which prevents him from being able to play on the edge of the defense. He should primarily be utilized as an interior defensive lineman.