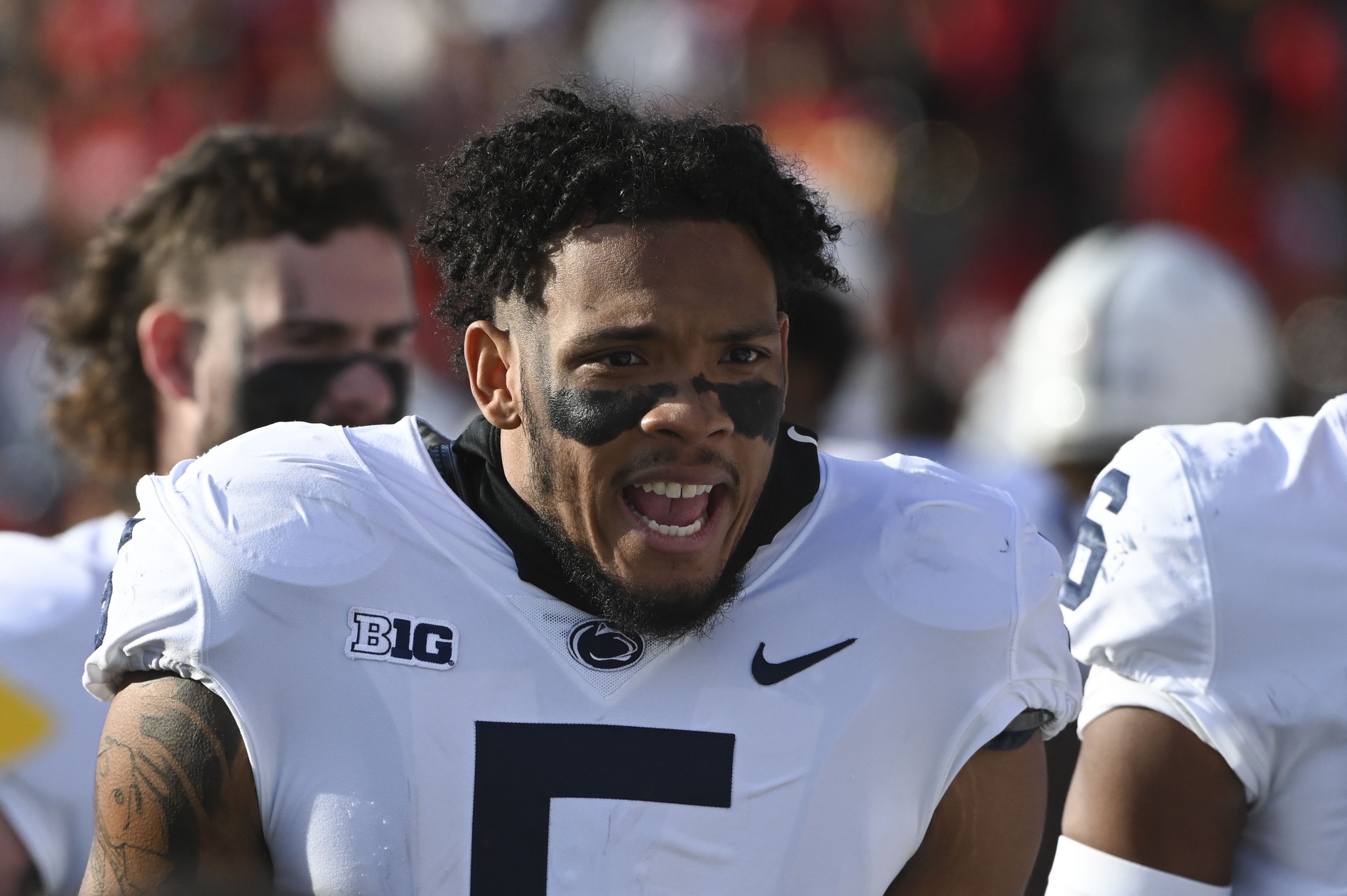 I’ve seen a number of coverage shells for Castro-Fields and I believe his best work has come in the half-turn and deep-third assignments in coverage. This allows him to eye the quarterback to aid his reaction to the football and keeps him leveraged and protected vertically. From this position, his stature can help him trigger and drive to the catch point.

Penn State cornerback Tariq Castro-Fields is a long-time member of the Nittany Lions’ defensive backfield and projects as someone who will serve as a bottom of the roster cornerback at the pro level. Casto-Fields has great size for the position and should be able to command a special teams role to help him remain on a 53-man roster, but I didn’t necessarily see the instincts and dynamic play in space to believe he is going to command a prominent role in the NFL. Castro-Fields hasn’t been able to generate a lot of impact plays throughout the course of five years of game action and has not logged an interception since 2019. He appears, to me, to be a baseline functional NFL athlete and if he’s able and willing to embrace the peripheral roles a defensive back can undertake, he can create himself a role. It is worth mentioning that Castro-Fields was an accomplished track athlete in HS and held the fastest 4×400 time in the state of Maryland during his junior year of high school. But that was many years and several pounds ago; Castro-Fields was originally listed on his 247 Sports recruiting profile at 173 pounds versus the 198 he’s currently listed at.

Man Coverage Skills: Castro-Fields has the size and physicality to be effective in press coverage, but I do have some concerns with his reactive quickness. Receivers in each of the games I watched were able to shake him effectively when trying to play from the hip. He’s not overly dynamic to attack at the top of the step and stay sticky.

Ball Skills: Castro-Fields has experienced a healthy amount of ball production with 25 passes defensed but his conversion rate for turnovers is low and he hasn’t logged a pick in two seasons (although 2020 was an abbreviated experience).

Tackling: He failed to wrap up a number of his challenges, including on the opening run versus Auburn and on a target in press-man versus Jaxson Smith-Njiba that resulted in an explosive play after the catch. But as a whole, he’s got a great frame for tackling and he’s managed to allocate some impressive production in tackles behind the line of scrimmage (10).

Versatility: Penn State has asked him to do a fair amount. He took on half-turn deep-third assignments, played cloud coverage in shallow zones, was charged with press-man, and on a few occasions rotated to a deep safety when dictated by motion. He isn’t someone I’d leave on an island in the pros and he’ll either need to serve as deep leverage himself or have vertical backup behind him to protect from big plays.

Competitive Toughness: I can appreciate the effort put forth here in pursuit. He actively challenges blockers on the perimeter and has shown the ability to discard effectively. He’s hot with pursuit and rally skills to the football as well. His functional strength should be considered an overall plus and aid in his bid for a special teams role.

Functional Athleticism: I would classify Castro-Fields as a sufficient-level athlete. His click-and-close skills are modest and he doesn’t showcase the most dynamic feet to trigger and attack. He’s high-hipped and when in bail, his pad and hip level compromises his change of direction abilities to a point that is hard to ignore.

Football IQ: Five years of playing experience should have Castro-Fields as well equipped as possible for the pro game. He will enter the NFL as a 23-year-old rookie, so the question must be asked if he’s too close to his ceiling to covet early as a prospect.

Run Defending: This is one of his better traits. He’s a sturdy frame on the outside to wrap up and I appreciate how assertive he can be to step down and challenge the run. When stacked against blockers, he is active with his hands and eager to negotiate blocks to uncover and come head up with ball-carriers.

Length: Castro-Fields appears to have plus length and with his frame could be able to sell teams on playing him in press and developing him in this regard. As is, he should be given chances to play through the frame of receivers and contest throws at the hands when targeted if he’s able to stay on the body.