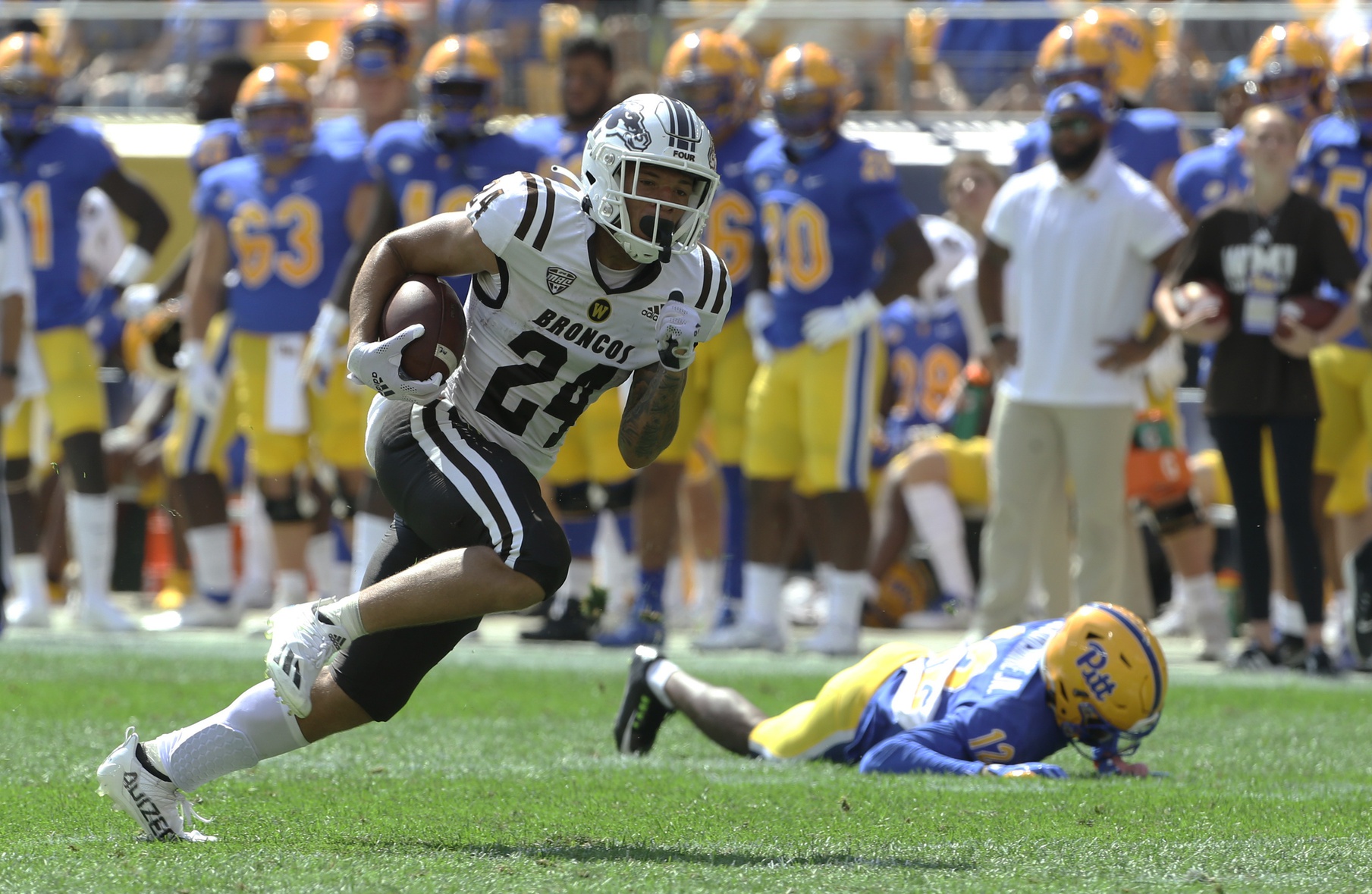 Still relatively new to the position, Moore sure wins early and often in his routes.

I was impressed to see the short-area agility and efficiency Moore showed on his route breaks. Hard angles were created with suddenness and his footwork economy was proficient to gear down quickly. I saw him run a slew of routes, too—working slants, fades, corners, speed outs, and hooks from various alignments. Given how new he is to receiver, this is an exciting development.

Don't let his stature fool you, he's made some wow throws that test his radius.

I’m plenty comfortable with his catch radius given his frame but I don’t think he’s ever going to have success playing above the rim with consistency. He’s not an accuracy eraser and quarterbacks who don’t throw with timing are going to test his ability to make an impact and play through contact.

There's exciting upside to tap into here given his recent transition to WR.

This is still a very green football player in the grand scheme of playing receiver! Three years of experience at the position and showing this kind of versatility as a player is a testament to his natural instincts and the ceiling he presents. He showed good ball skills and body awareness along the sideline too, providing tight-window catches with momentum carrying into the boundary.

Western Michigan wide receiver Skyy Moore enters the 2022 NFL Draft process as an impressively productive prospect. Moore, a redshirt sophomore, burst onto the scene in 2019 with more than 800 receiving yards as a true freshman in the Broncos offense. He became just the third MAC receiver to be named First-Team All-MAC as a true freshman since 1982. Ever since, he’s been a high volume and big-play target in the passing game, winning on fades from the slot, in-breaking patterns into the teeth of the defense, and on rhythm throws in the RPO game.

I saw a lot of Sterling Shepard of the New York Giants in his game—from his quickness to his release package to his stature and how he wins after the catch. Moore appears to be yet another strong option on day two of the 2022 NFL Draft, which is loaded with quality wide receiver prospects. In order to get the best of Moore’s game, I would like to see him step into a spread offense where he can attack defenses from the slot and use his agility and sharp breaks to snap off separation. When you consider Moore was recruited largely as a two-way athlete with a background in playing both quarterback and defensive back, his film resume becomes even more important. If he’s only scratching the surface of his technical prowess at the position, then the sky could be the limit (no pun intended) for Moore at the NFL level.

Hands: Moore made a number of impressive catches away from his frame. He snagged a number of throws in traffic over the middle and showed good ability to focus and see the ball all the way into his frame amid contact. He plucked one over the shoulder touchdown that tested the limits of his radius and showed very good hand-eye coordination. This is a plus trait.

Separation: His ability to stack vertically against press is something that offered some mixed results, but he’s got ample skills at the top of his stem to snap quickly off his path and I appreciate how he doesn’t telegraph his breaks. He’s got good speed but even better agility for when he’s got a defender trailing on his inside hip.

Release Package: I really enjoy the instances where he gets to work against press to see his creativity in his releases. He’s not the biggest or strongest, so press corners with length who can get a piece of him have been able to bubble him and ride him and disrupt timing, but his foot-fire and hand usage both allow him to force missed punches.

Run After Catch: I don’t necessarily think from a functional speed standpoint he’s a true burner but he gets plenty of action after the catch. Western Michigan did a good job isolating him in man-to-man coverage and letting his ability to win both at the line of scrimmage and at the top of the route create a high-stress tackle environment. He broke a fair bit of them for chunk gains.

Versatility: Moore handled four career kicks throughout his three seasons but I think this is an area where he could continue to grow and improve and add value. He’s a natural with the ball in his hands and has been schemed touches in the WMU offense courtesy of jet motion, RPO glance routes, quick smoke throws, and more in addition to his resume as a three-level threat.

Competitive Toughness: The contact balance here is impressive. He’ll absorb contact fairly well and play through contact to drag tacklers. He’s built dense and it shows when he’s challenging you with power. He blocks his ass off, too—I’m impressed to see a player of his stature stepping down and sealing defensive flow.

Big-Play Ability: He’s made a lot of big plays and averaged a healthy clip per reception over his career at WMU. That said, I do think he’d benefit a great deal from being a complementary piece of the puzzle. He’ll win his one-on-ones and shows good but not great functional speed in the open field. Good for one tough as nails catch over the middle per game.