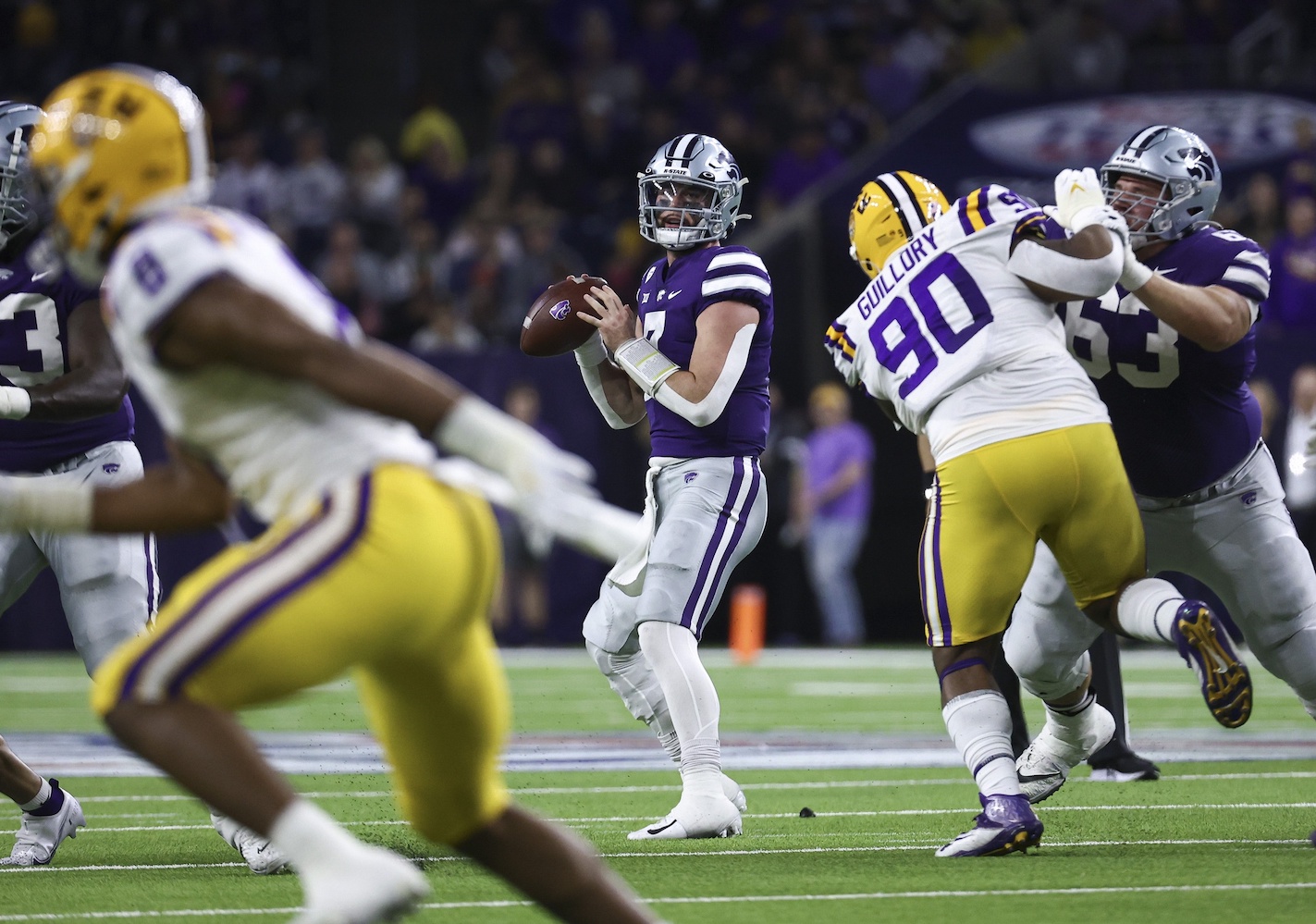 Thompson plays the QB position with confidence. He will sit in the pocket and scan the field to find open receivers. He carries himself with a swagger that he knows that he can make plays. When put in chaotic situations, his decision-making isn’t the best, but he never seems to really panic.

Thompson’s mobility may be his most attractive trait. He has made multiple off-script plays due to his mobility and ability to evade defenders. His mobility also allows for coaches to call QB-run plays where he can pick up substantial yardage.

Throughout his career at Kansas State, Skylar Thompson has played in more than 30 games. During the 2021 season, Thompson was able to play his best season of football. He was able to throw for more than 2,000 yards and throw for 12 touchdowns while also rushing for four. Thompson is a dual-threat quarterback that likes to make plays off-script. He is an instinctual player that can scramble in the backfield to extend plays then throw the ball down the field to his receivers. When asked to stand in the pocket and deliver the football, Thomson can be inconsistent in going through his progressions and delivering. This is a skill that Thompson needs to improve on in order to be successful in the NFL.

Accuracy: While Thompson’s completion percentage is high, his accuracy in different portions of the field is in question. At Kansas State, a large portion of his completions were short to backs out of the backfield and TEs. When throwing the deep ball, he can be inaccurate and his balls sail high in the receiver. This looks to be a mechanics issue that starts from his lower body.

Decision Making: Thompson looks to make one or two reads then he goes straight to improvising. Thompson is very effective when his first and second reads are open, but when there aren’t open receivers, Thompson likes to pull the ball down and run for yardage.

Progressions: Working through all of his progressions is something that Thompson needs to improve on. He is very decisive when he has his first or second read open, but after he gets through those two reads, he chooses to tuck the ball and run. This can be an issue because he often misses an open receiver who uncovers who was not initially in the first or second read.

Release: Thompson’s recognition of release time seems to be on par with most college quarterbacks. He doesn’t show to have an elongated release that affects timing when getting the ball to receivers on time. Thompson also shows the ability to change arm angles in order to get the ball to receivers when he has defenders bearing down on him affecting his traditional release angle.

Pocket Manipulation: In the pocket, Thompson appears to do an average job of moving around. He has the awareness to step up in the pocket when there are defenders coming off the edge. The only issue with Thompson is that he appears to escape the pocket before he has to at times so he can tuck the ball and run.

Leadership: It appears that Thompson is a good leader. His ability to make spectacular off-script plays keeps his teammates motivated. I believe this is a QB that would rather let his play do the talking for him and is a leader by example on the football field.

Mechanics: Thompson’s mechanics are split between his upper body and lower body. His upper-body mechanics look to be on par with an effective quarterback, but his lower-body mechanics need much improvement. Thompson bounces while he’s in the pocket and doesn’t give himself a steady platform to throw the football. This often results in him throwing the football high and being an inconsistent, inaccurate quarterback at times.