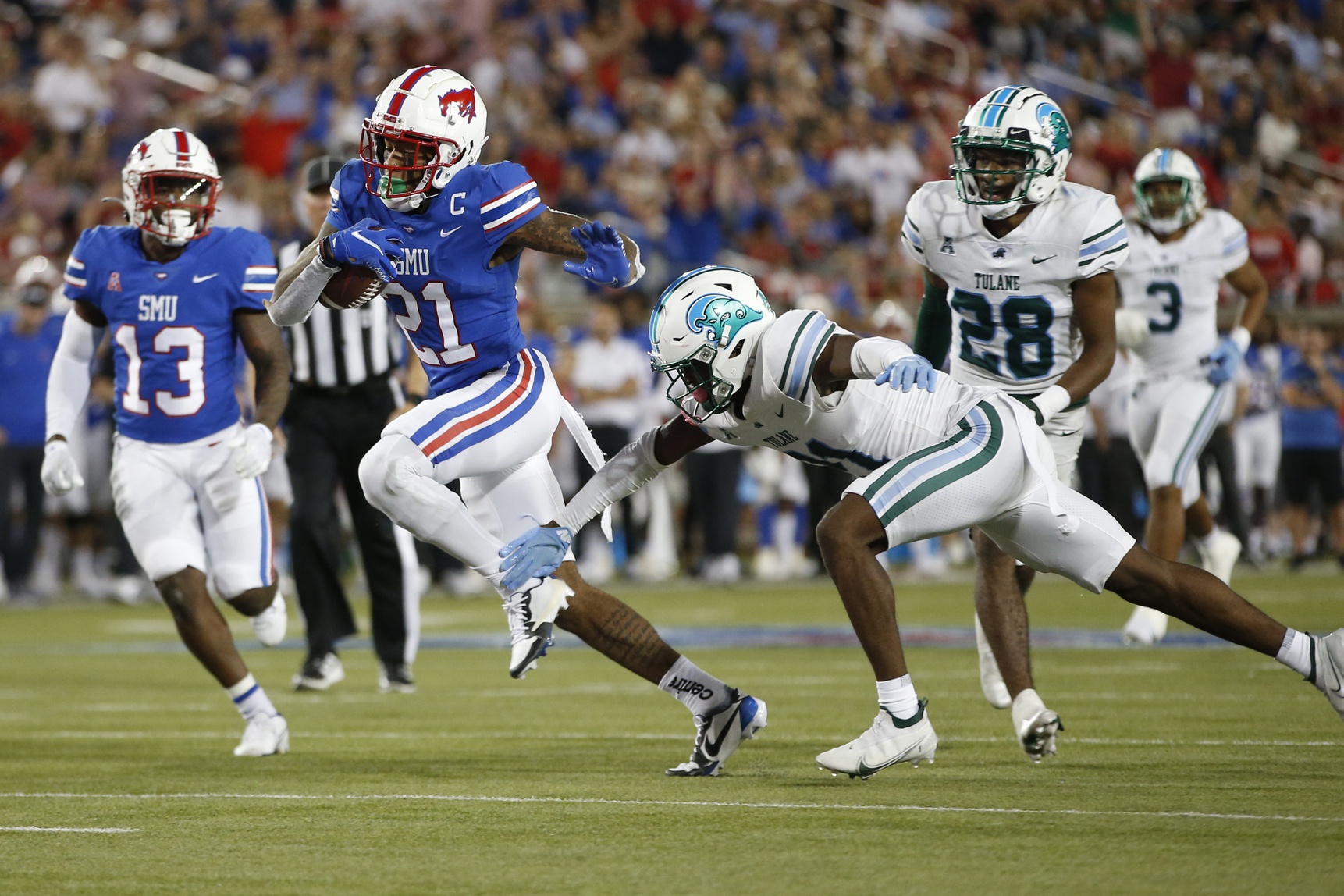 While he hasn’t been tasked with an expansive route tree, Roberson is deceptive in setting up his route breaks, working to stack, and attacking space. He uncovers quickly on slant routes, doing a terrific job blending vertical push, setting up his break, and crossing the face to get open. Roberson makes excellent adjustments on the fly against zone coverage to find space and make himself available.

Roberson’s suddenness in and out of breaks and smooth acceleration enables him to uncover. He has the speed necessary to stress the defense vertical and makes terrific adjustments against zone coverage. I don’t think he was quite as springy in 2021 as previous years and that is something to monitor.

Reggie Roberson began his college career at West Virginia where he spent the 2017 campaign before transferring to SMU. There, he developed into a dangerous playmaker for the Mustangs. After claiming a prominent role for SMU in 2018, it appeared he was destined to become one of college football’s most prolific receivers. Unfortunately, his 2019 and 2020 seasons ended early due to injury but he managed to escape 2021 without a major ailment. Roberson is an explosive playmaker with rapid acceleration skills. He can both uncover quickly and stress defenses down the field with his speed and ball-tracking skills. Roberson is potent with the ball in his hands and is capable of creating yards for himself. He feasted on single coverage and the spacing of the SMU offense to create big plays. When it comes to projecting Roberson to the next level, he has a notable curve ahead of him considering SMU used him almost exclusively in a static alignment on the left side of the formation while running a limited route tree. There is going to be significantly more on his plate in the NFL and ideally Roberson would have more experience on special teams and as a returner in college. He also needs to find more consistency playing through contact and not being outworked for the football at the catch point. There’s a lot to like about what Roberson brings to the table but he has to stay healthy and become a more complete receiver.

Hands: Roberson is a natural hands-catcher that routinely plucks the football away from his frame. While drops have never been a major issue for him, he does have an occasional drop where he’s unable to cleanly haul in the ball. His grip strength to hold on through contact is only modest.

Release Package: Roberson has shown good technique and variance in his releases to beat press coverage. He has a variety of hand techniques and footwork to get off the line and clear jams. With that said, playing through contact when opponents get their hands on him is a challenge.

Run After Catch: Roberson is productive after the catch and his rapid acceleration ability leads to bonus yardage. He is quick and shifty with good vision and capable of forcing missed tackles. As with separation skills, I didn’t find Roberson to be quite as dynamic in 2021 as in previous years, which is likely due to working back from injuries.

Ball Skills: Roberson tracks the ball well and makes good adjustments to the football. With that said, there are instances where he gets outworked at the catch point for the football. He may have issues with getting himself in good positions to catch the football and win in contested situations at the next level because it wasn’t a strength at SMU.

Football IQ: Roberson has good route-running technique and makes good adjustments. With that said, he primarily functioned from a static alignment on the left side of the formation and not often from the slot. He will need to adjust to having much more on his plate at the next level.

Versatility: Roberson has appeal at all levels of the field as an outside or slot receiver. It is worth mentioning that SMU played him almost exclusively on the left side of the formation and rarely ever put him in motion or worked him from the slot. He has barely contributed in the return game or on special teams in general throughout his time at SMU.

Competitive Toughness: I wouldn’t say Roberson isn’t competitive, but the physical and tough components of the position aren’t his strengths. He wins with speed and technique and not necessarily an alpha mentality. There is something to say for all of the injuries he has worked back from and continued to produce.

Big Play Ability: Roberson has been a big-play receiver for SMU and has a chance to do the same at the next level. He wins vertically down the field with speed and his ability to track and adjust to the football in the air. He should get chances for shot plays at the next level but I wish he had more of a resume in the return game and taking handoffs/being used in gadgety ways.