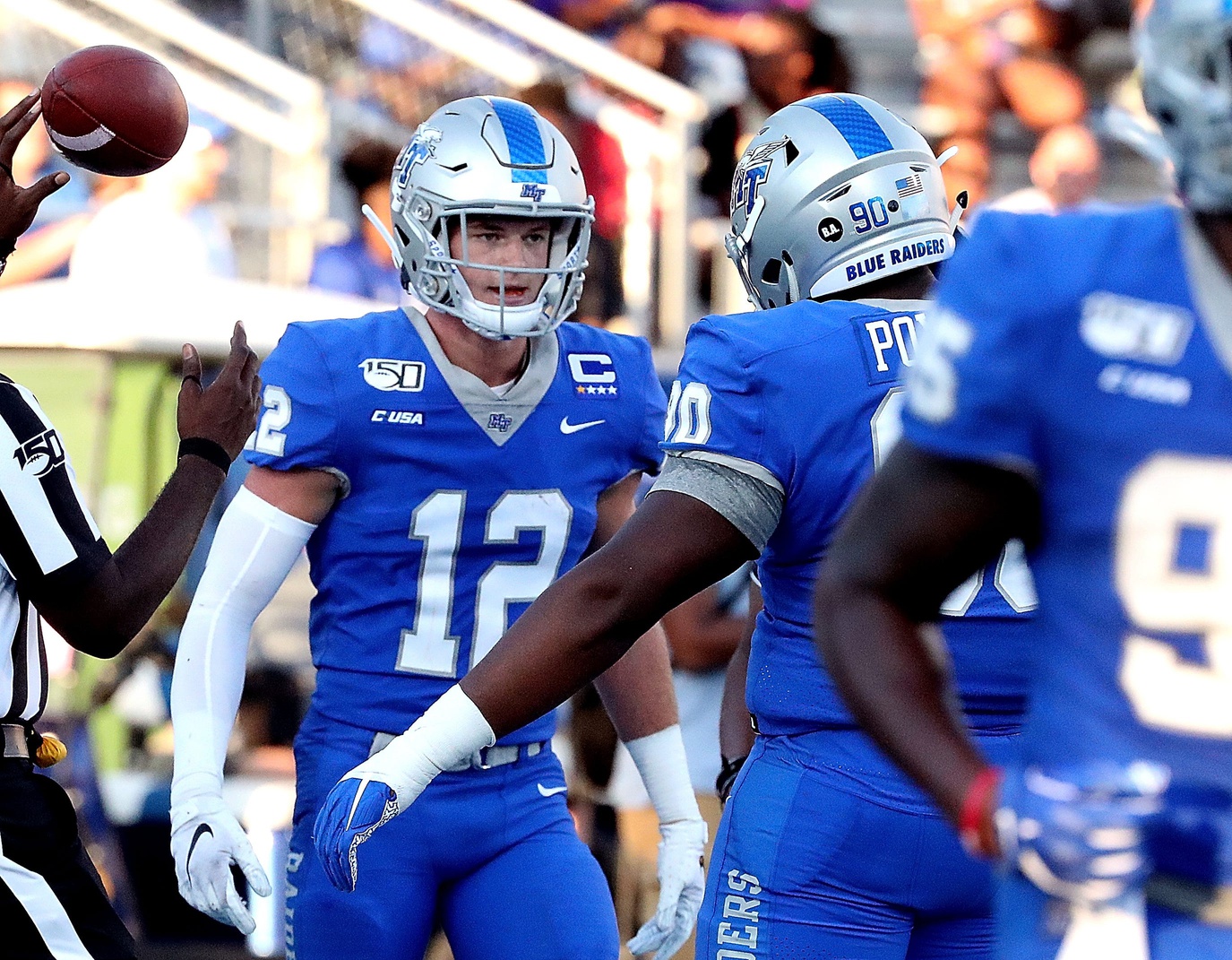 Blankenship is a well-seasoned starter who has seen plenty of reps in a number of different assignment regions on defense. He’s most instinctive when keying the run, and when he’s allowed to roll down at the snap, he’ll redirect with swiftness to the ball. His coverage reps at times do feel a little overambitious—sneaking or shading too far before having to try to correct on the fly. Confidence in his athletic ability is something that springs up in multiple areas.

He is a very good tackler in the secondary. His finishing skills have made him one of the most productive tacklers in the MTSU program history and with his range, length, and effectiveness in wrap-and-roll situations, he’s got a big presence playing downhill.

He was used at times as a punt returner and he’s the kind of staple on kick coverages that you’d expect to never leave the field for your team’s third unit. I like his appeal as a coverage option on kicks because of how physical he is, how well he’ll attack blocks, and his tackling prowess. Start him here and let him grow into a defensive role.

Reed Blankenship projects as a viable third safety at the NFL level and could potentially serve as a starter in a two-high principled defense. Blankenship has sufficient range on the back end and made his biggest impacts down the stretch of his career at Middle Tennessee State as a tackler and pursuit player—he logged an impressive 106 total tackles and 10 tackles for loss during his final season of play in 2021. 2020 was a big bounce-back year for Blankenship, who missed significant time in 2019 on account of a broken leg; he stayed healthy and looked to be back to 100% capacity from a functional athleticism standpoint, a big boost for his outlook in the pro game after stringing together multiple seasons of uninterrupted play. Blankenship is much better in zone and as an overhang defender, but he does offer some value in the nickel as well—he was charged with blitzing there and created havoc at times as a pressure player off the edge. MTSU let him take some man-to-man reps from the nickel as well, but I’m not overly sold that’s an area where he’d be providing the biggest benefit in subpackage looks against 11-personnel. In all, Blankenship is a multi-year captain and offers plenty of skills as a tackler. He’ll be a core special teamer and in the right system could take the reins as a starting safety down the road.

Ideal Role: Third (nickel) safety and serving rocker role to drop down into the box at the snap.

Versatility: You can play him deep if you’d like, but his ability to consistently hunt up the ball will be hurt as a result. Ideally, you get him rolling down or playing nickel in three-safety looks. His ceiling is definitely higher in subpackage than it is as a base defender who will play deep half or try to fit the run from 15 yards off.

Range: Blankenship does have the ability to cover significant distances and looks good on the hoof, but he’s much more effective playing forward than he is trying to flip and carry down the field. As a deep-middle defender, you won’t get sideline-to-sideline range out of him, but cutting the field in half should afford him the chance to meet all his assignments.

Ball Skills: The regression here is something to note. Blankenship had four interceptions as a sophomore, two as a junior (in seven games prior to a broken leg), and zero in nine games in 2020 before returning to school for an extra year of eligibility and logging one interception in 2021. His role evolved some over that span and it is nice to know he’s capable of making plays on the ball, but coverage impact shouldn’t be considered a high strength at this point in time. That said, he did recover three fumbles in 2021 and forced two more, showcasing a multifaceted nose for the football.

Run Defending: Blankenship runs the alley well and sets up on the edges to attack ball-carriers with effectiveness. He’s a confident head-up tackler and has imposing hitting power for slow rolling backs looking to press the perimeter. Some of his initial angles can be a little overambitious, but he really stands out here as an asset and would be impactful as both a rocker safety and in the nickel.

Functional Athleticism: Blankenship entered the 2020 season on Bruce Feldman’s freaks list—it is well deserved. He was credited with a 4.50s 40, a 38-inch vertical, and a 10-foot broad jump in MTSU strength and conditioning. For a 200-pound safety, he offers plenty of fluidity and grace in his adjustments and offers a ton of sticking power to explode and jar ball-carriers. His long speed is only adequate, however. He’s not a track athlete, but with his preferred role, he also won’t need to be.

Competitive Toughness: He’s played an enforcer role as a member of the MTSU secondary and plays with terrific effort. I noted in the summer study that he may have covered more ground on a snap by snap basis than any other safety in the conference—he flies all over the place. The functional strength and ability to address blocks will help him be persistent and effective in his run fits as well.

Flexibility: Blankenship has plenty of bend and contortion skills to lengthen himself both at the catch point and as a tackler. His hip hinge and transitional burst out of the pedal and when playing deep assignments is less appealing—he’s not as natural there and oftentimes he does show a touch of transitional lag before flipping and looking to work to the perimeter.