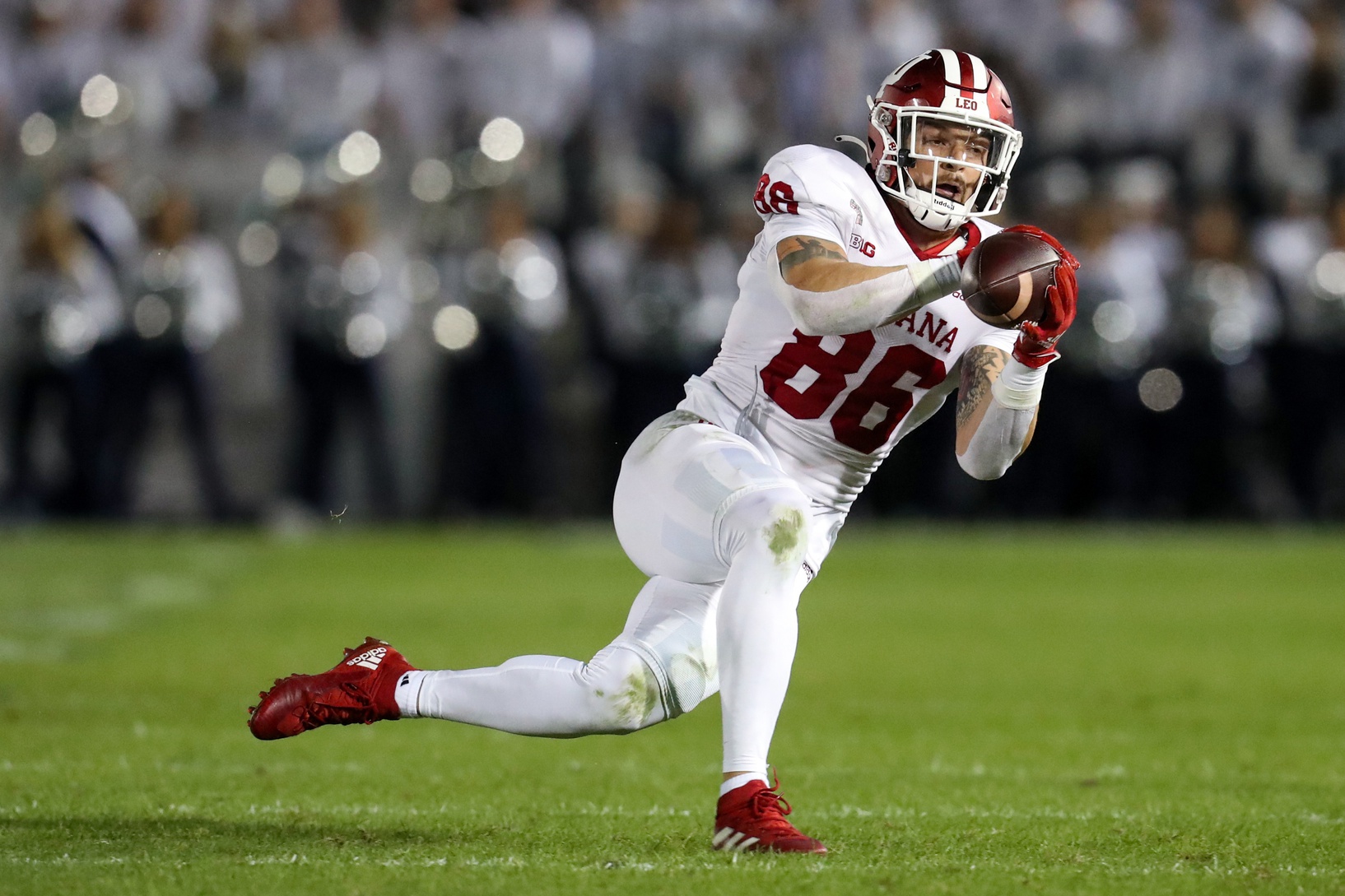 Easily Hendershot’s best trait. He shined here in the red zone in 2019 before a RAC regression in 2020. He’s a significant red zone threat with how well he’ll defeat tackles underneath.

Peyton Hendershot is a movable tight end prospect who will be afforded the best chances for success as a hybrid receiver who can move around offensive sets. Hendershot will need to ace the pre-draft process after some significant off-field issues rooted in domestic violence nearly cost him his playing career with the Hoosiers. Any NFL team who chooses to invest in Hendershot will need to find comfort in how he has grown and evolved from his background. On the field, Hendershot is a receiving target first and foremost and will offer only marginal upside as a blocker in the run game or in pass protection. Multiple-TE sets will be where he’s most effective, as he’s not overly appealing set to the strength with his hand in the dirt. So where does he win? He’s had some success as a run after catch target and Indiana did a lot with Hendershot in the red zone to leak into uncontested shallow areas. A significant regression in 2020 was met with a bounce back in 2021, as Hendershot nearly matched or set career highs in all major receiving categories amid a disastrous season for the Hoosier as a whole.

Hands: When workload and target share have been there, he’s proven to be a capable hands-receiver. He does well to avoid trapping the ball against his pads and is capable of tucking the football quickly on receptions in short space before securing and turning up the field.

Route Running: A lot of his work came not far from the line of scrimmage. He’s more of a YAC winner than he is a seam buster or someone who will threaten safeties down the field. Look for a high volume of leak routes, overs, hitches, and shallow crosses. He’d do well in a split zone flow offense that allows him to duck out of his slice block and into uncovered flats.

Versatility: The run down and pass blocking opportunities don’t really move the needle for you. He needs more power in his hands, more strength in his lower half, and better footwork if he’s going to be an every-down option or at least command reps in a more diverse set of alignments. As is, he’s a rotational piece that can offer modest fits in the run game but win with finding space and voids away from LBs.

Competitive Toughness: Functional strength and toughness is a tale of two opportunities. Does he have the ball in his hands? If so, he’s challenging to corral and he’ll use his size and athleticism to rumble through smaller tacklers. But if you ask him to play in-line, which Indiana did at times, you’ll see him get punished and collapsed with too much frequency. It’ll only get worse in the pros, so look for a notable transition window before things click.

Ball Skills: His adjustments to the football are very good and he does well to reach for the ball early to optimize his opportunities to set up RAC. He hasn’t been tested often down the field on deep targets.

Blocking Skills: This isn’t someone you’re going to ask to put his hand in the dirt and charge with getting movement off the ball. He can offer complementary skills in the slot as an F or potentially cut across the set to get a piece of an end man on the line but in terms of raw skills as a blocker, I don’t see a high floor or a high ceiling.

Football IQ: You get the sense that there’s some untapped potential to be uncovered here based on how well he transitions into creating yards. But you don’t get the impression that he’s particularly close as a blocker and his usage in route-running will likely require an incubation period before he claims significant snaps. If you need a year-one return on investment, this may not be your play.

Pass Protection: There’s little to no value here for Hendershot when playing from an in-line position. If he’s flexed into the backfield, you’ll afford him more chances to slice and work across the set in split zone play-action looks, but head-up blocks are hindered by a narrow base and uninspiring functional strength to hold up at the point of attack. A lack of strength will cause folding at the waist and chasing blocks.

Big-Play Ability: Chunk plays were a hallmark for Hendershot’s 2019 campaign. The role and usage haven’t evolved too much but there were fewer chunk gains to be found in the abbreviated 2020 season before a reasonable bounce back in 2021 with similar yardage production.