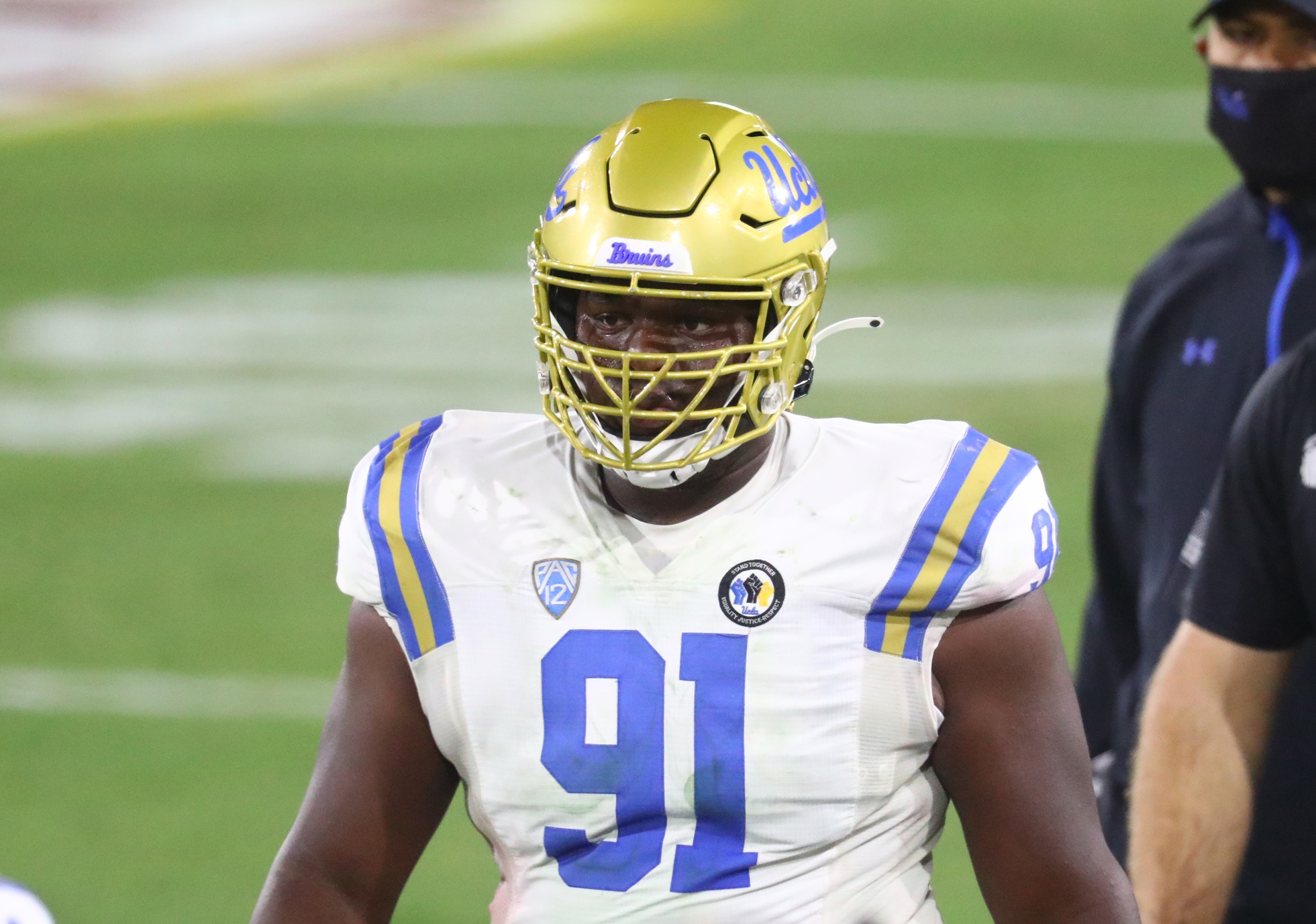 He has good power in his hips and hands. He can hold the point of attack and is hard to move backward, especially with single blocks. He also shows the power in his hands to disengage.

Otito Ogbonnia is a senior who aligns as an IDL for the Bruins’ hybrid-like defense. He has been shaded over the center, aligned in a “0,” and also aligned in a 5-tech. He is a sufficient-level athlete with regards to lateral movement and mobility. In the passing game, he is predominantly a bull rusher who lacks an array of tools in his pass-rush arsenal. He can adequately loop or stunt but doesn’t generate consistent pressure on passing downs. In the run game, he is more effective. He is very strong at the point of attack and it’s extremely hard to move him off his spot with a single block. He has very good functional strength to disengage, but moving laterally isn’t a strength. He is most effective when he comes off the ball with good pad level and maximizes his functional strength. He’s not explosive and can be late off the ball at times as a result.

Scheme Fit: He can play in an even or odd front

First Step Explosion: He is a player that I would consider “stronger” as opposed to being classified as explosive. He lacks good get-off and can be late off the ball at times.

Flexibility: He isn’t the most flexible athlete. He can come off the ball and get his pad level higher than ideal. When this occurs, he doesn’t maximize his good functional strength simply by not playing with good posture.

Hand Counter: He doesn’t counter well. However, the functional strength he has in his hands allows him to disengage from linemen. He has been predominantly a rusher who has relied on his power as opposed to technique.

Hand Power: He has good power in his hips and hands. He can hold the point of attack and is hard to move backward, especially with single blocks. He also shows the power in his hands to disengage.

Run Defending: He is better against the run than he is against the pass. He can use his girth to hold the point of attack and disengage to get to the football.

Effort: He’s been inconsistent with his effort throughout the game. This may be due to conditioning. When plays are run away from him and are out of his vicinity, he can shut it down.

Football IQ: He displays good football IQ. He can hold the point, locate the football, and disengage. He needs to be more consistent getting off the ball, though.

Lateral Mobility: He has average lateral agility. He does a good job of holding the point and getting to the football. This is also evident when moving down the line when plays are out of his vicinity.

Core/Functional Strength: He displays good functional strength. He is stronger than he is explosive. However, his good power allows him to disengage.

Versatility: He lacks true positional versatility. He plays IDL and should remain there in an even or odd front scheme.