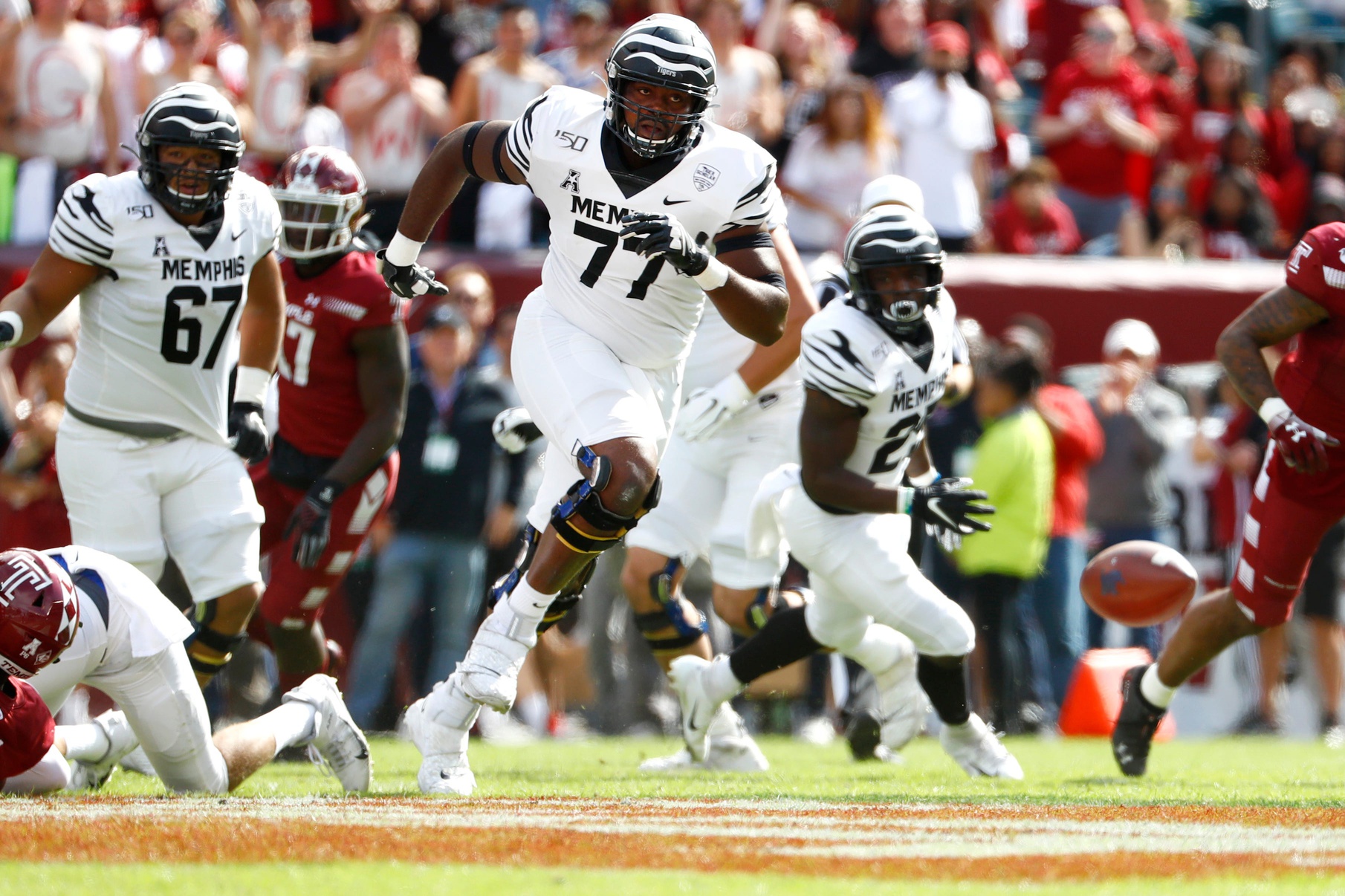 Eze shows the most athleticism in his game as a run blocker. Most notable on Dart, Counter, and Inside Zone blocking schemes, when utilized as puller or when climbing up to the second level, he displays the agility necessary to thrive in those types of run schemes.

Obinna Eze has been the starting LT for TCU for the past two years. Eze is originally from Memphis, Tennessee and committed to Memphis Tigers. Eze transferred to the TCU program at the beginning of the 2021 season and immediately became the starter at LT.  Eze is a massive player listed at 6-foot-8 and 330 pounds. On the field, Eze uses his big frame to act as a barrier between him and the quarterback. For a big guy, Eze flashes quick feet to mirror pass rushers  but he is inconsistent at times. He will occasionally become a stationary blocker and relies on his size alone to do the job. In the NFL, Eze has a real opportunity to become a starter at the LT position.

Balance: Eze is a massive offensive tackle and his movements can be unorthodox at times. With this being said, it appears that Eze is able to maintain his balance in his pass sets. But in the run game, his balance becomes an issue. Eze’s height and ability to bend becomes an issue and he leans forward too much to try and make contact with defensive linemen.

Pass Sets: Eze is a very large offensive tackle and he knows it. Instead of always getting out into his pass set quickly, Eze uses long, slower-paced steps to cover ground and get depth in his pass set. Eze prefers to keep inside leverage to prevent defenders from being able to pursue an inside move against him. Once Eze takes away the inside, he likes to force defenders to run the arc around him

Competitive Toughness: For Eze’s size, you appreciate the effort that he gives on every play. Most players of his size become lazy and put in minimal effort, but not Eze. He works to block his defender and will put his body in awkward situations to complete his blocking assignment.

Lateral Mobility: Eze’s lateral mobility is inconsistent at times. There are times when Eze flashes the ability to redirect and mirror defenders and seems light on his feet for a guy his size. And then there are times when he looks lethargic in his movements. I believe that if Eze can consistently play with quick feet on the outside he can be a reliable starter for teams.

Length: Eze has exceptional length that he uses to his benefit. In his pass sets, Eze uses his arm length to contact defenders and run them around his area of contact. Oftentimes this serves as a sufficient method to pass protection for Eze. Eze will also use his arm length to grab and stabilize defenders before they can make contact with him. His arm length serves as a true disruption to defenders who are trying to rush the passer.

Football IQ: At the tackle position, Eze looks to have sufficient IQ. He identifies second-level blitzers and can pick them up when need be. His IQ is also evident in how he can use his big body to his benefit and take away the inside gap, forcing defenders to run around his body. He has good awareness and understands who he is as a player

Hang Technique: Although Eze shows to have strong hands, he still needs to work on hand placement. At times, Eze will get lazy with his hands and will end up being grabby. This deficiency in Eze’s game looks to be more of a consistency issue and not a lack of ability.

Anchor Ability: When Eze can line defenders up he is really good at anchoring down and holding the point. Eze is a large human and it is tough for almost any defenders to simply bull rush him. Eze only shows a problem anchoring when defenders use speed and counter moves and he isn’t able to properly get his feet under him.

Power At POA: In the run game, it’s really hard to gauge Eze’s power at the point of attack because he is so tall and it’s hard for him to get good leverage on defenders and sustain blocks to knock them back. With this being an issue, I believe that Eze will be best served in a zone-blocking scheme where he doesn’t have to worry about moving defenders but just simply walling them off.

Versatility: I don’t believe that Eze provides much versatility as a player. Due to his massive size, he struggles to play with the leverage needed to move inside to guard and be a factor in the run game. Eze has a frame and athletic traits that would make him a tackle only and preferably a LT.