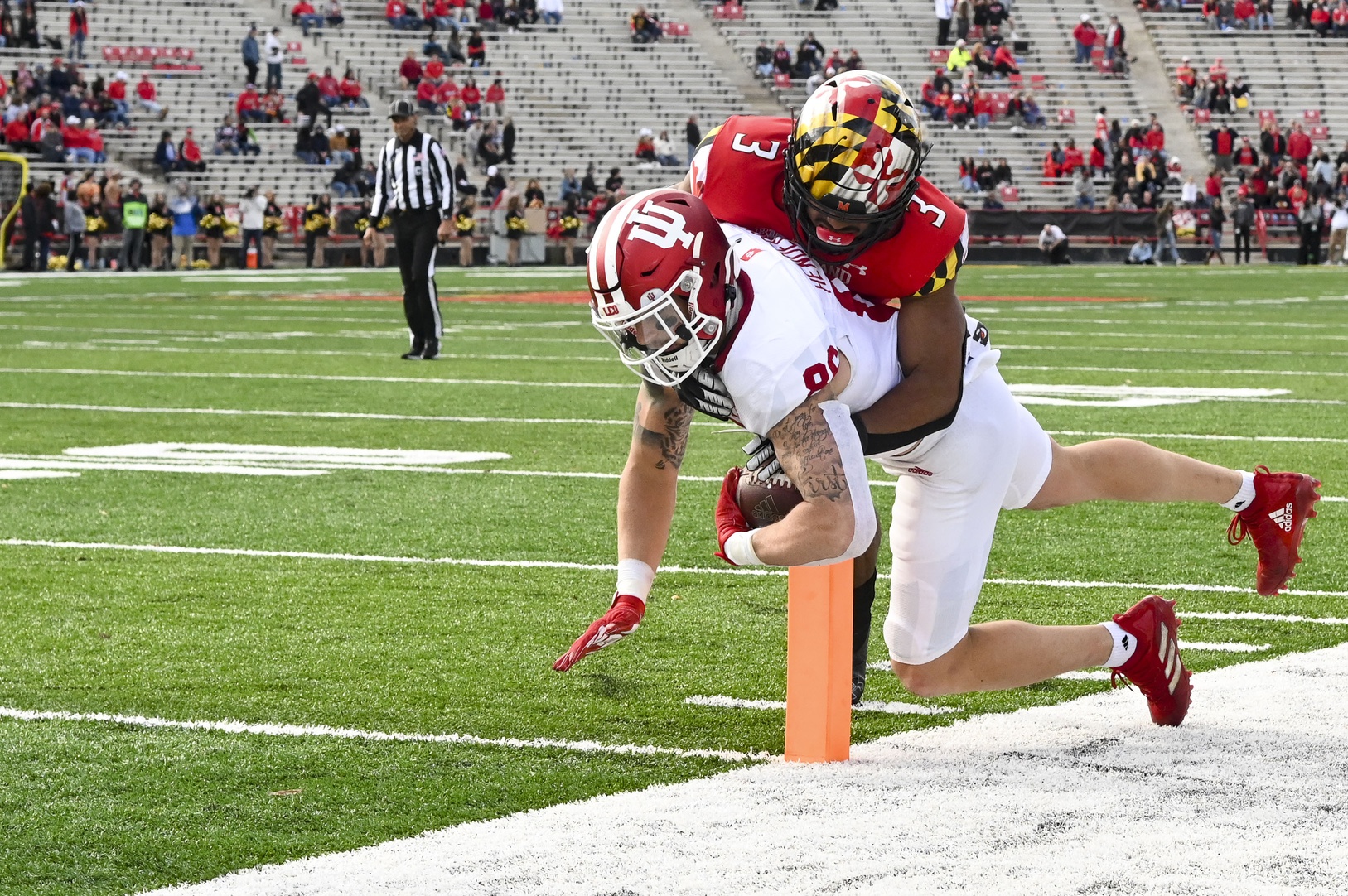 His hitting power is really strong—I like what he’s able to offer. But with that said, some of his angles from deep alignments come too flat and allow ball-carriers to cut sharply off his first contact. He gave up big yards after contact on a challenge against Michigan that was run in for a long touchdown, and against Ohio State came downhill too flat and gave up the edge on another big run. But when he’s got his angles in order, he’s capable of smacking you to the turf.

Maryland has asked him to do a lot. I’m impressed with his versatility as a pressure player and coverage option. He’s often an “add on” to pressure situations when TEs and RBs stay in on pass protection in an effort to pick up a +1 situation. He’s shown good burst as a third-level hitter and found QB pressures on a number of instances from deep alignments. His coverage versatility isn’t without misplays but he’s shown himself physically capable of banging with tight ends and running in the high post.

I see plenty of fluidity in deep coverage to flip his hips and carry route stems through the break. His ability to drop his hips is present but I would like to see some better weight distribution and footwork to help him add more spring into those hard plant-and-drive situations. Body contortion to extend and contest the football is very strong—he nearly made a phenomenal undercut for an INT vs. Ohio State (2021) along the sideline to showcase his body control.

Maryland safety Nick Cross is a highly intriguing prospect who has the physical skill set of a starting free safety at the NFL level. Cross is dense and well built but also twitchy, showcasing some high-level athleticism in space and when needing to scrape and flow in pursuit of the football. I wouldn’t consider him a finished product by any means and his variance early on in his career may be too steep for some teams to feel comfortable with, but the potential here is absolutely undeniable. Cross, a three-time Honorable Mention All-Big-Ten performer in three seasons of play with the Terps, has been a starter since nearly day one upon walking on campus, playing in 29 contests with 21 starts.

Cross’ decision to enter the 2022 NFL Draft is a gamble on himself and his talent, but given the overall dynamics of this year’s group at the safety position, I can get on board with his potential and am excited to see where he lands. I do think he’s a highly scheme-diverse type of player who can showcase himself in the high post or in split-safety shells where he can drop down and get involved in the run or alternatively pattern match routes in Cover 7 and bracket routes. Maryland used him at times as a WILL linebacker in sub and other times let him drop down into the slot—near the goal line, you often saw him stacked overtop of tight ends and asked him to use his size to match in coverage. I think Cross is someone you can do a lot with, you just need to brush up on his angles and consistency closing in space and continue to work on his route combination recognition to help him continue to level his game up. This is someone I’d consider a long-term starter with proper coaching.

Football IQ: There appear to be some instances where his eyes betray him. He isn’t consistent with his anticipation nor his spacing when teams attack him vertically and make him choose. He has let vertical routes slip behind him in deep coverage and his anticipation to drive when the QB’s hands break off at the release point has allowed him to concede some completions you’d expect a player as dynamic as him to be able to threaten. I’d consider him a work in progress here and it may benefit him to keep a smaller menu of roles until he’s grown fully into one.

Range: This is an area I’d describe Cross as currently adequate and an area that I think has a ton of untapped potential. His instincts at times betray him and leave opportunities to anticipate on the field, leaving him in recovery mode as compared to arriving to plays early. It’s struck both carrying assignments across the MOF or when playing deep and being caught between vertical stems. But the athleticism is there if the rest of his game falls into place.

Ball Skills: The flashes are there. He plays the ball well in the air on instances in which he’s leveraged overtop of the throw—those have come in deep half and when leveraged overtop of two-strong and charged with playing off in a man-to-man or pattern-match situation. His ball production was solid across his entire career—15 total passes defensed in 29 games—and he’s also shown a nose for the football as a tackler, generating three forced fumbles (often courtesy of slashing strikes as a tackler).

Run Defending: In contests where he was stressed vertically, you saw him take a calculated, deliberate approach to filling the run. He definitely respected the responsibilities that come with playing as the last line of defense and served a “clean up” role in that regard to his play. Closer down to the box and when on the B-level, you did see an added intensity with his charge and showcased good hand usage to attack and negotiate blocks before wrapping up the ball-carrier.

Functional Athleticism: Cross has some inefficiencies in his transitions but they appear to be more so fundamental as compared to raw athleticism. Some of his triggers from off coverage and soft alignments feature extra steps and are a hindrance to undercutting throws. He’s got very good straight-line speed, and when he’s seeing things with confidence, he does very well to hunt down the ball.

Competitive Toughness: Did I think there were some opportunities for him to get on his horse a little quicker and flow with pursuit to the football with more urgency? Yes. He was benched for a game in the abbreviated 2020 season for “playing slow” by HC Mike Locksley, but the peak flashes of burst and range are hard to ignore. When his fire is lit and he’s into the flow of the game, he’s a heck of a prowler underneath.

Special Teams Ability: I don’t see any reason why Cross couldn’t be an early contributor on special teams, where things are a little less complex and the assignments are a little more straightforward. Cross will need to make sure his pursuit angles are crisp in these instances to stay in his lane and keep assignment, but if he can do that, it’s a perfect way to get him involved as he hones his craft.