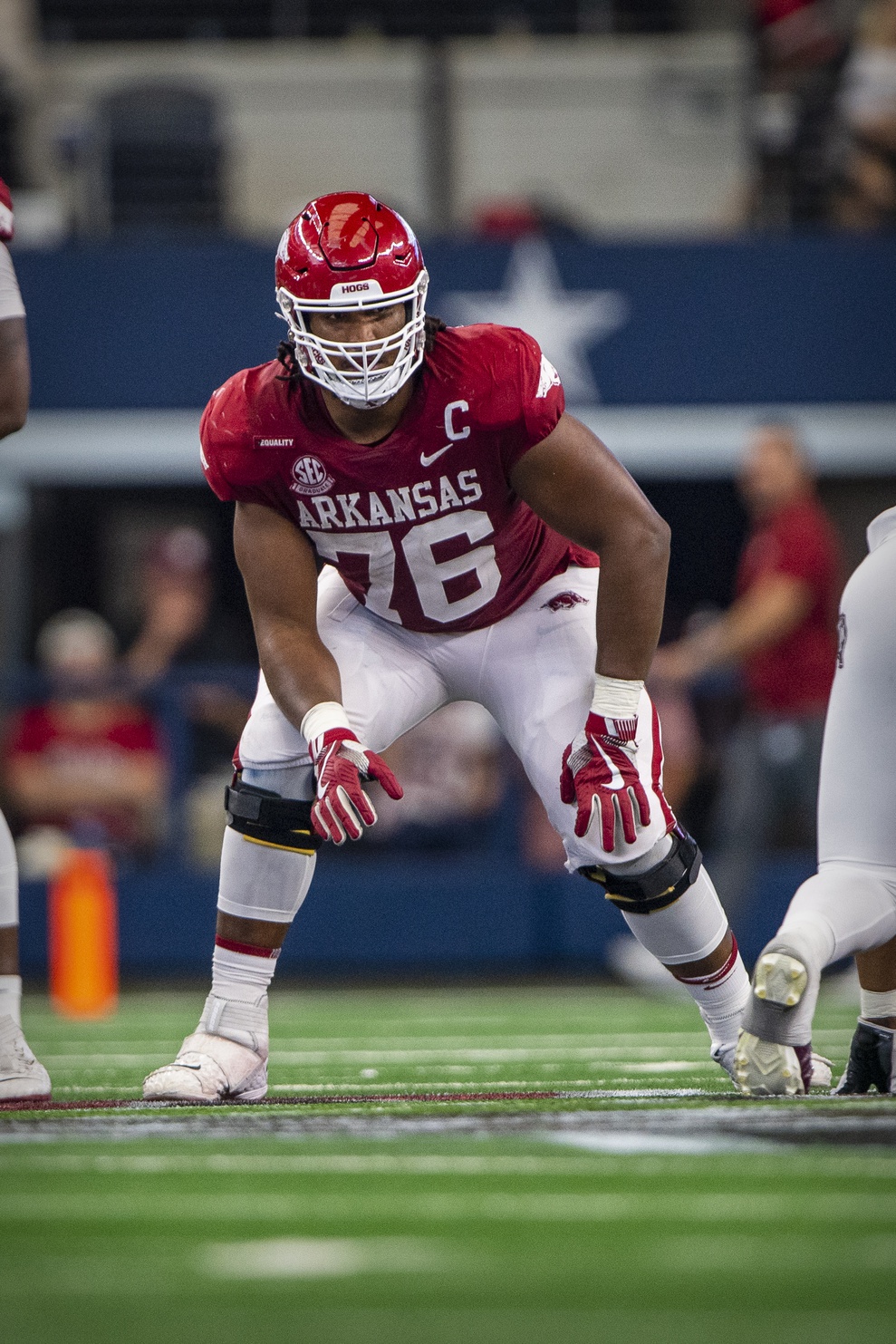 Cunningham has played right tackle and guard before finally finding a home at left tackle. His best position will likely come at right tackle where he isn’t asked to face speed rushers as often and would allow him to be on the strong side where he can excel as a run blocker.

Cunningham has impressive and active hands in the passing game. He shoots his hands quickly and his punch timing is excellent. He will miss from time to time and needs to work on consistently landing inside rather than on the shoulders. He has strong and firm hands to control and steer once latched on.

Arkansas left tackle Myron Cunningham is a well-traveled player who took the long way in order to reach this point in his career. He started his collegiate career at Western Illinois where he was unable to make an appearance. He then dropped down to Jr. College where he excelled and earned multiple offers from top programs before deciding to enroll at Arkansas—that’s where he played the final three years of his collegiate career. Cunningham has played left tackle for the Razorbacks and has a ton of experience facing quality pass rushers in the SEC. A long and well-built player, Cunningham offers the prototypical size for a tackle at the next level.

In the passing game, Cunningham uses his outstanding length to his advantage and makes it very hard to get around him as he is able to extend his long arms, widening the arc. He is an above average athlete who can slide and mirror, although he does show signs of stiffness in his lower body when forced to change direction and redirect. He has a good anchor and handles bull rushes well. He displays good overall hand use with a quick punch and good timing. While he is able to keep in front of most rushers, rushers who win with speed and an explosive first step will give him challenges. In the run game, Cunningham fires off the ball hard with good power at the point of attack. He plays with good hand use and has powerful hands to latch and steer once he engages. He plays too high at times and is a waist-bender because of how tall he is, which limits his ability to generate consistent knockback power and will cause him to fall off blocks. He’s a developmental player who has the size, length, and functional athleticism to play at the next level, but the lack of foot coordination, balance, and lower-body power are areas of concern.

Balance: Cunningham displays just above average balance in both phases. Because he is so tall, he plays with his weight over his toes too often which causes him to lean and overextend when he is trying to engage. Additionally, as he works to the second level, he struggles to land blocks as he has a hard time dropping his weight to come to balance.

Pass Sets: Cunningham is smooth in his pass sets, showing an ability to fire out of his stance quickly and gain depth. He is at his best when he is able to get his hands on the defender early in his set where he can then use his length to his advantage and steer his opponent around the arc.

Competitive Toughness: Cunningham is a tough player who likes to impose his will against his opponents. He is best when he initiates contact where he can use his long arms and big frame to engulf defenders and drive them through the whistle. There are instances where he is a bit lethargic in his movements, which could be due to conditioning.

Lateral Mobility: An above average athlete, Cunningham has average lateral mobility in both phases of the game. In the passing game, Cunningham gets out of his stance quickly with quick feet to gain depth. He does struggle against speed rushers who can stress his edges quickly and will have a hard time handling quick inside counters. In the run game, he is able to climb to the second level with little trouble but his ability to come to blance and connect to moving targets needs improvement.

Length: Cunningham has excellent length and uses it very well. He is quick to engage his opponent, latching his strong hands, and then is able to control and steer all while keeping his body clear, allowing for a clean set. He is at his best when he is able to connect and use his length to ride the edge around the arc. He offers a strong lockout when faced with speed to power and defenders have a very hard time getting around his long levers.

Football I.Q: A three-year starter, Cunningham displays good overall football IQ. He knows how to handle stunts and games and is excellent at passing off defenders. He has good timing on peeling off of double teams and takes good angles in his reach blocks and on outside runs.

Anchor Ability: Cunningham certainly has a firm anchor as he was rarely beat with pure power or speed to power. He is able to sit back on his hips, extend his long arms, and then absorb contact with relative ease. I would like to see him not lose posture and play with better knee bend.

Power at POA: He generates solid movement in the run game but he isn’t a mauler by any means. His height and long frame make it hard for him to sink and explode through his lower half, thus limiting the amount of power he can generate.