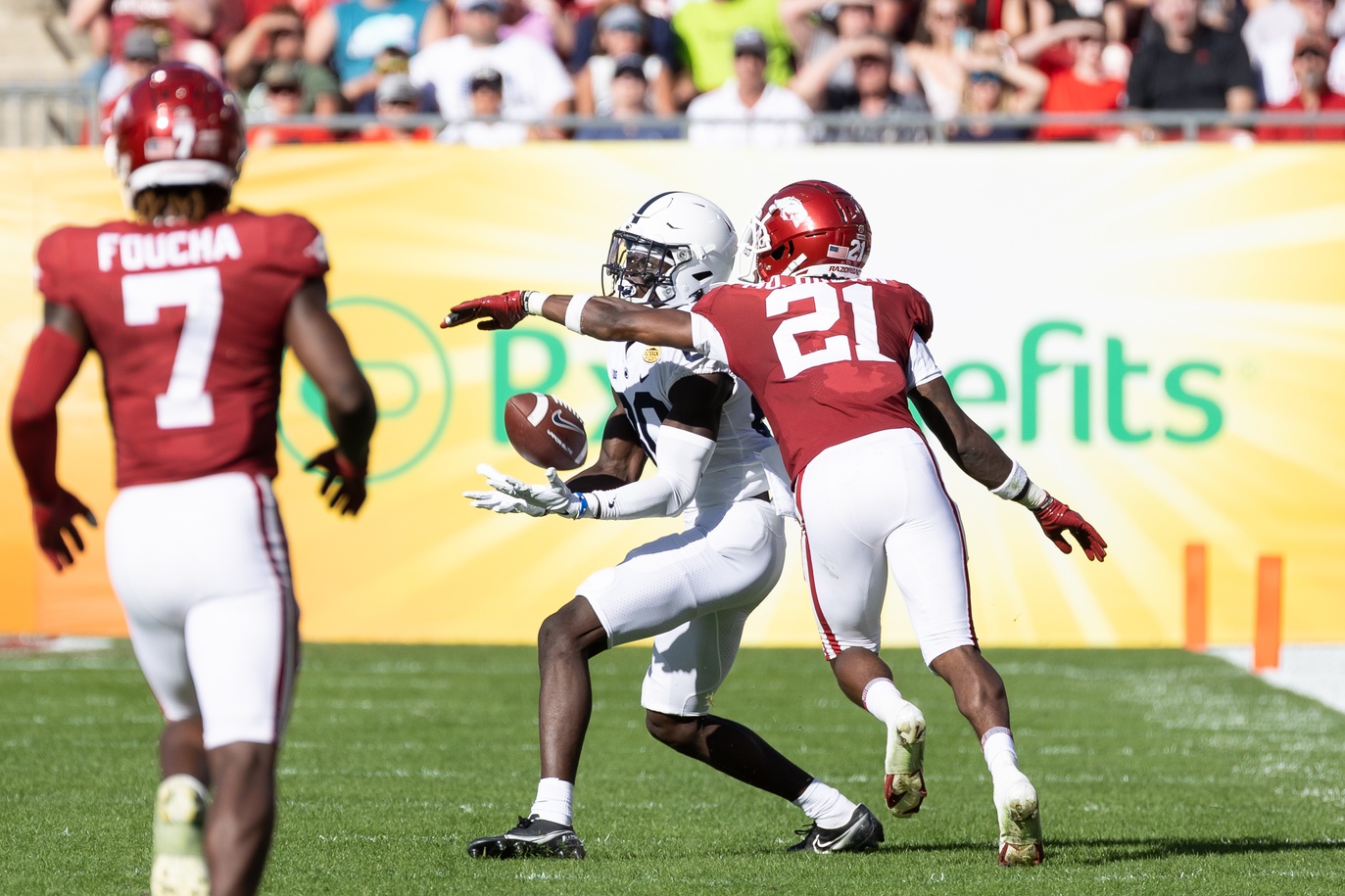 Brown competes at a high level and it shows in multiple levels of his game. As a pursuit player, Brown is willing to chase ball-carriers down from any position on the field. Brown is also a scrappy player when it comes to paying the run. He fights with receivers to disengage and make the tackle when the run play is coming his way.

This is a high-level IQ player at the corner position. He shows to have an in-depth knowledge of route concepts that he uses to jump routes for interceptions and pass deflections. He also shows his IQ when playing the ball in the air and has the presence to punch through the receiver’s hands and knock the ball loose once the ball touches the hands of the receiver.

Brown is a good run defender. He sheds receivers well and does a good job of stepping up to make the tackles. And in certain formations, he understands the concept of crack-and-replace to play runs that may come out of condensed formations. Brown is a reliable tackler and plays with physicality

Montaric Brown is a former 4-star recruit from the state of Arkansas. During his recruitment, Brown was the No. 1 player in the state of Arkansas and was a big-time get for the Razorback program—they were able to beat out programs like Alabama, Auburn, and LSU. Brown enters the NFL as a very experienced college player logging more than 30 starts/games played in his career. On the field, Brown’s experience seems to pay huge dividends. Brown is an instinctive player and has a knack for getting to the football, whether that’s for a pass deflection or an interception. During the 2021 season, Brown was able to haul in five interceptions, which landed him as an SEC leader in that category. At corner, Brown is a playmaker that is comfortable in all portions of the field. In the NFL, Brown has the instincts and athleticism to immediately challenge for a starting position.

Man Coverage: Brown is a good man-to-man defender. He has the technique to press receivers and throw off their releases and ultimately the timing of the route with the quarterback. Brown also has the make-up speed to catch up to receivers if he misses with his technique and receivers get behind him.

Zone Coverage: In zone coverage, Brown shows outstanding instincts. Brown is great at reading the quarterback and receiver and triggering to break on the ball when the timing is right. He always manages to keep a good cushion between him and the receiver so he doesn’t bail too much and give up easy quick gainers. Zone coverage allows Brown to use instincts and also play multiple routes in which he can jump a route and intercept the ball.

Ball Skills: This player has shown to have great ball skills. He properly locates the football and waits for the right opportunity to go for the interception or pass deflection. He has quick reactionary instincts and can intercept passes that arrive quickly. He is a very productive player and always looks comfortable when the ball is in the air.

Tackling: Brown is a good tackling cornerback. He works to shed defenders on the perimeter and pursue the ball-carrier. When given the opportunity, he will go for the big-time hit and try to jar the ball loose. He also showed the ability to take effective rip attempts at the football to make the ball-carrier fumble.

Versatility: In Arkansas’ scheme, Brown takes primarily all of his snaps at the boundary corner position. I believe that he is physical enough to play nickel and insert on run plays, but I don’t think that should be his primary position in the NFL. I question his quick-twitch athleticism and how effective he would be consistently covering receivers on two-way options.

Functional Athleticism: Brown has good functional athleticism. He shows that he has the reactionary athleticism to jump routes and become a ballhawk at the corner position. He also has fluid hips to be able to come out of his backpedal and turn and run with receivers who are pushing the field vertically.

Length: While Brown doesn’t appear to have exceptional length, he understands how to properly use it. Brown is excellent at running to get back in phase with a receiver and then at the last second sticking his arm out to deflect the ball. He can also use his length to disrupt receivers when he decides to press them.