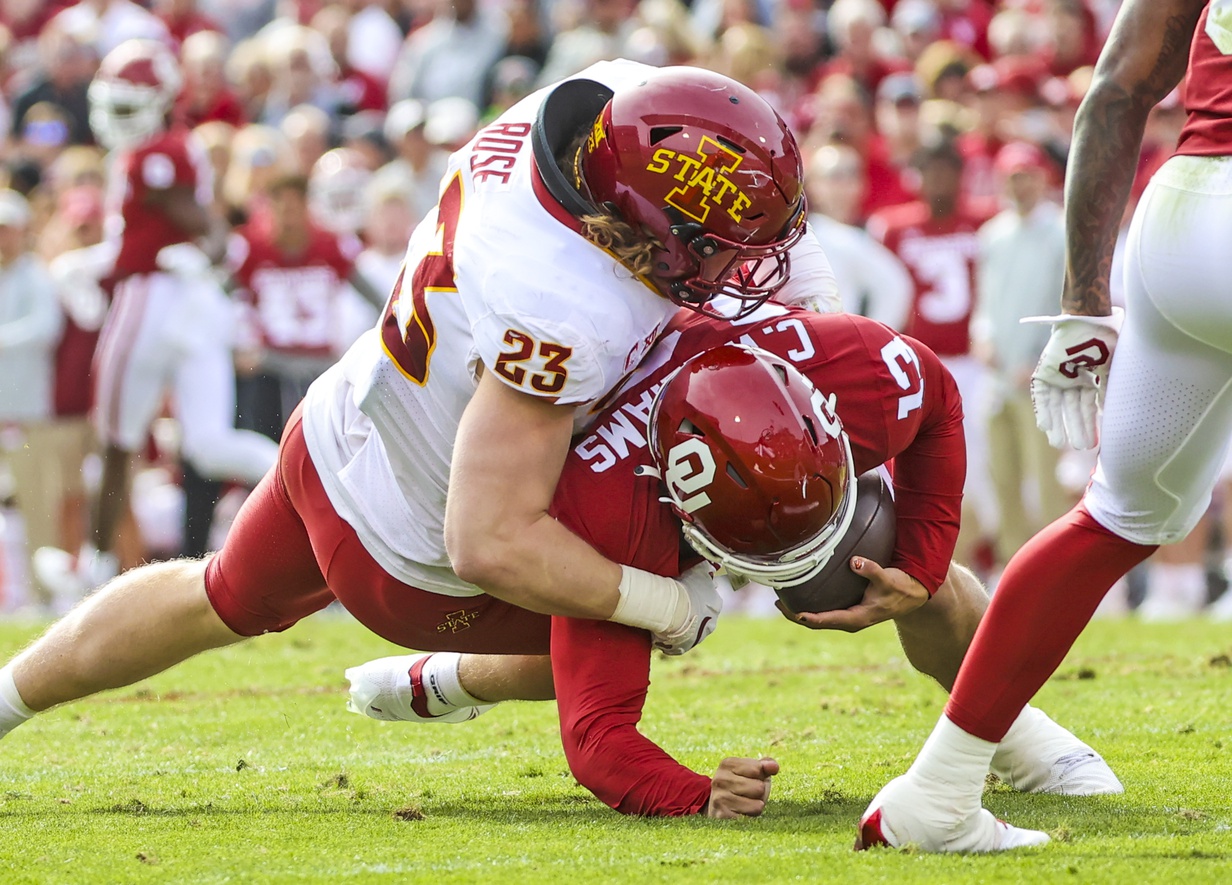 Fiery competitor that exudes high energy in his play. Communicates assignments with his teammates. Team leader in career starts. His relentless effort and versatility are infectious.

Mike Rose was a 3-star recruit out of Brecksville-Broadview Heights. He was a three-year starter in high school and was named first-team all-conference and an all-district selection. He was a two-sport athlete, playing basketball and football. Rose ranked as the No. 55 outside linebacker by 247 Sports and a top-40 player in Ohio. He has been used as an outside linebacker aligned in the overhang position. He’s a competitive defender that leads by example. Projects better as a MIKE due to lack of athleticism to consistently play outside of the tackle box. He has a high football IQ to diagnose run or pass designs. He’s a reliable spot dropper in zone coverages, keeping his head on a swivel.

Tackling: Rose is a fundamental wrap-up tackler. In moments where he overruns the play, his long arms keep him within striking distance. Rose is plagued by missed tackles as a result of poor leverage. He is a high and upright striker, allowing the ball-carrier to make contact underneath his pads. Lowering his pad level and rolling through his hips can shore up his tackling deficiencies. His lack of short-area quickness causes him to miss tackles by a shoestring.

Football IQ/Instincts: Reads and diagnoses offensive blocking patterns/combinations. He diagnoses plays before they unfold. This allows him to play one step ahead. Remains cognizant of down and distances to defend the right area of the field.

Competitive Toughness: Rose is a physical and fierce competitor. He does not mind putting his body on the line and playing a physical brand of football. He does not stop working to the football even when the leverage battle is lost. Relentless motor to continue fighting through an OL’s latch.

Pass Coverage Ability: High football IQ to read and pass off routes in zone. His head remains on a swivel to remain aware of the routes that threaten his area. He will face-guard slot receivers before zone turning to stay in phase. In 2020, he came down with five interceptions on the season. Lack of twitch and explosiveness may limit him to zone responsibilities. Gains proper depth as a spot dropper.

Run Defending: Functional strength at the POA. Attacks gaps with a bull mindset, drops his head, and shoulders to force his way through. Continues to fight through contact to remain in striking distance of the ball-carrier. Sets outside leverage from the overhang position. Identifies the read-option and QB-keep plays before triggering downhill.

Block Deconstruction: Attacks blocks with physicality. Trying to slice through blocks by driving his shoulder into the OL. Uses his hands as a two-handed press to maintain separation to track the ball-carrier. When pressing quickly on the OL’s chest plate, his long arms create space to keep him clean.

Lateral Mobility: Rose is an above average athlete and mover. He uses short lateral strides to cover ground in the box. He applies quickness to stay ahead or on path with the ball-carrier. If the ball-carrier’s perimeter leverage is ahead of Rose, he will turn and commit to that direction.

Flexibility: Rose lacks true bend to run the arc as an edge rusher. His game is more run-through and step-around. He’s not a natural mover, instead, he’s mechanical with stiff hips. With his contact strength, Rose can twist his upper body without compromising his lower-body balance.

Versatility: Rose split time as an in-the-box backer and overhang/nickel. He was trustworthy detached from the tackle box, but in the NFL, he will face a tougher task. NFL offenses will target him with quick-twitch receivers and dual-threat running backs. Playing more off-ball MIKE and edge in an odd front is the best usage for Rose.