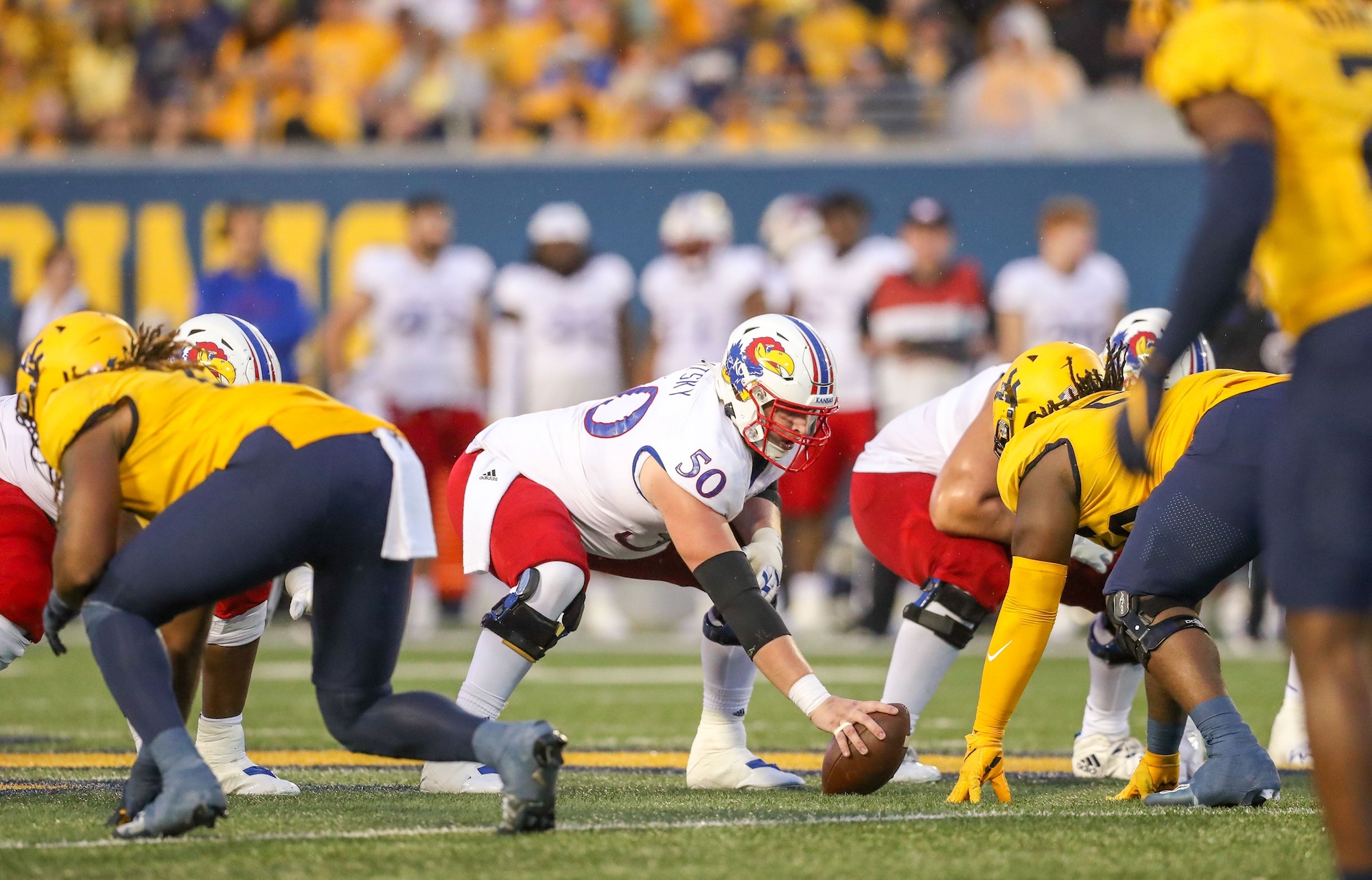 Pros: Playing in one of the most dynamic, fun-to-watch offenses in college football, Mike Novitsky is the heart and soul of Kansas football’s offensive unit. A burly 6-foot-4 and 300 pounds, Novitsky moves well for his size and possesses serviceable NFL strength. What jumps off the film is the precision and tireless effort he plays with. I love everything about his upper body. He has really strong hands—when he gets the grippers on he’s tough to get off. On the other hand (pun intended), he’s technically sound in his placement, knowing where his landmarks are on the defender and constantly repositioning or replacing his hands to regain the most optimal points of strength to finish his blocks. His head placement is superb and shows a really strong understanding of angles and leverage needed to position yourself to block defenders. In wide zone specifically, he showed a knack to be able to displace his body in a position to seal and wall off defenders after winning with his hands. He showed a wide variety of abilities in different run schemes, but I believe he’d be best suited in a zone-heavy scheme. In pass protection, he plays with great leverage and timing on his punch. He plays with a wide base and has good lateral agility and is able to mirror interior linemen through the different phases of their rush. His leverage keeps him from being overpowered—he can quickly get into his bull rush counter technique but also counteract it with a pull technique when defenders try to shed him. Above everything, what I loved about Novitsky’s game the most is that in the infrequent cases where he would lose in the first phase of his block, he would tirelessly work to strain and recover to make something out of it and stop the defender from making a play—a very necessary and admirable trait that separates good from great on the offensive line. He’s a high-floor player who will be a plus backup with the potential to start in the right situation. He improved game by game and seems like his best football is in front of him.

Cons: Inefficient footwork in the run game was the biggest problem I had with Mike Novitsky. Versus 0-techs and tight 1-techs, off the snap, he repositions his feet wider behind himself, attempting to give himself a sturdier base to be able to take on one-on-one blocks in inside zone. While I understand the idea of the technique and it is probably something he’s been taught to do, he will need to be able to take vertical steps and still manufacture power in the NFL. In other cases, he doesn’t get enough on his first step or doesn’t get his second step down quickly enough. I’d like to see him keep his feet moving on contact as well, but he has a strong anchor to wall up regardless. For someone who has only been playing offensive line for four years, I have full confidence in his capabilities to improve his footwork to be able to match the demands of blocking NFL linemen with time. In pass protection, I had some concerns with downhill blitzing linebackers. In a couple of instances, he was caught off guard and blown up—he needs to be able to reposition and brace when he sees blitzes coming.