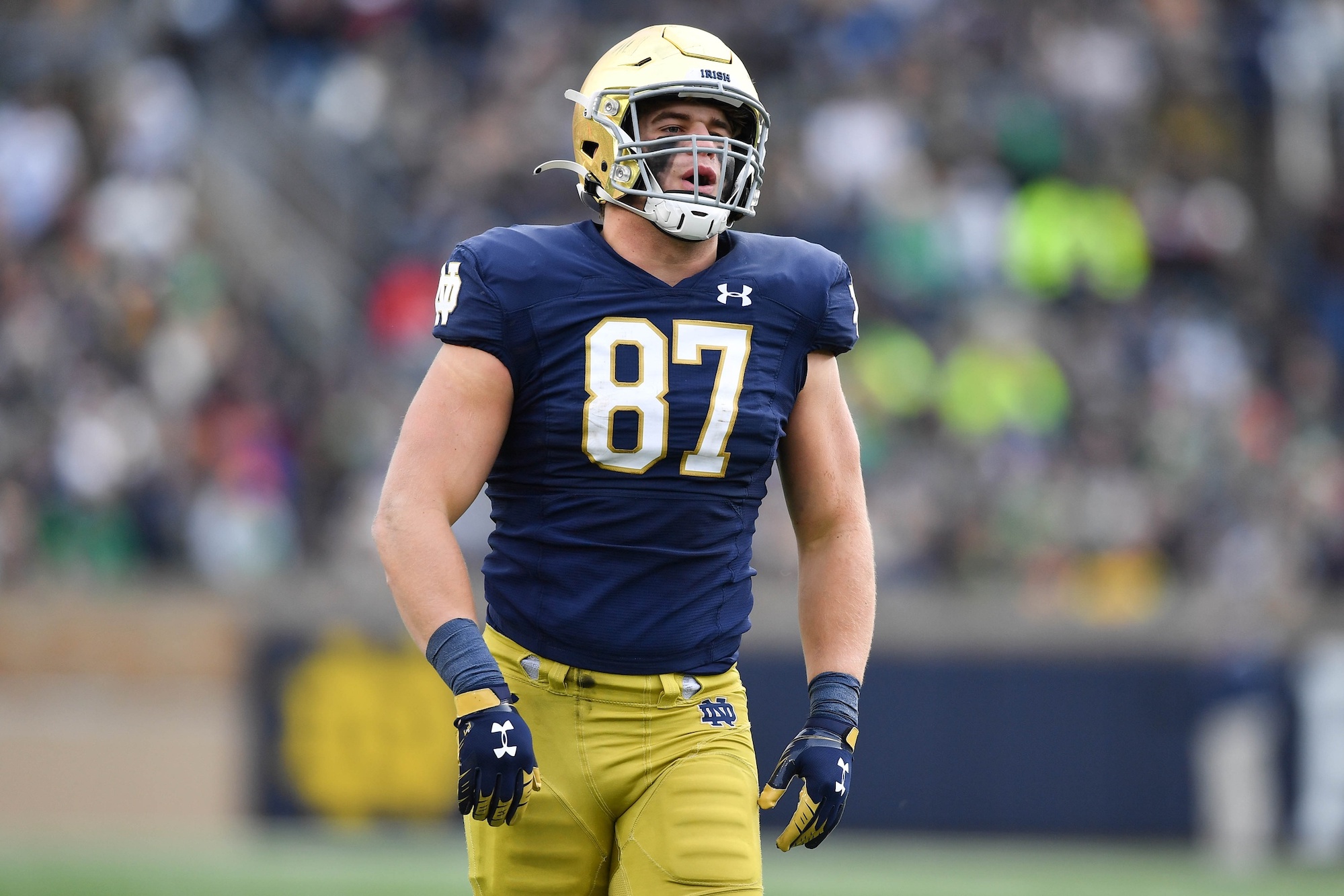 Pros: The hands and ability to catch in traffic jump off the screen at you immediately. Michael Mayer has soft hands, excellent ball skills, and showcases firm concentration on passes over the middle of the field—whether he’s running stick routes from 3×1, spot routes over the ball, or working the sideline. Those hands are paired with graceful body control, both in adjusting to errantly-thrown footballs that test his catch radius or tight-window throws along the sideline when he’s charged with working his feet on the perimeter. Mayer’s receiving production was boosted by a few blown coverages in 2021, including a long score against Florida State and another against Georgia Tech, but don’t mistake him for someone capable of creating added yardage. Mayer runs hard and with authority, putting defensive backs in a bind when deciding how to challenge him. Those who opt to cut low will be challenged with his free arm and surprisingly sudden feet to sidestep contact before getting back up field. Mayer’s route-running shouldn’t be undersold, either. He’s deliberate with his releases and shows effective salesmanship to nod his head at the top of the route before triggering into his break to facilitate false steps.

There’s been plenty of examples of tight ends entering the NFL who struggle with the rigors of playing in-line, but I suspect Mayer is better positioned than most to avoid these hardships. There’s a comfort level playing in tight and Mayer showcases a good sense of awareness to get clean releases into the second level when he’s capped at the line and keep the timing of his routes on schedule. As a blocker, Mayer has good functional strength, effective hand punch, and does well to sustain his base—he appears more pro-ready in this regard than most college tight end prospects. There is also a clutch factor to Mayer’s game. The team went to him many times in clutch, must-have circumstances, including on game-winning drives versus Florida State and Toledo, and in the red zone.

Cons: For all of the impressive reps Michael Mayer illustrates as a pass-catcher, I do think his athletic profile could be a limiting factor unless he continues to develop the nuances of utilizing his size to bump and create extra separation. He’s a nightmare to wrangle at the catch point but his quarterback is going to need consistent accuracy when charged with man coverage as he currently projects. I don’t think that will prevent him from consistently schooling defenders and churning out production but it is worth acknowledging as a dynamic of his game that could be limiting in the wrong environment. Mayer offers good functional strength but the “Baby Gronk” nickname probably paints an unjust expectation for him as a blocker—it is a good quality but not the dominant trait that Gronkowski has become known for throughout his NFL career. Is there room to grow into that level of play? Absolutely.