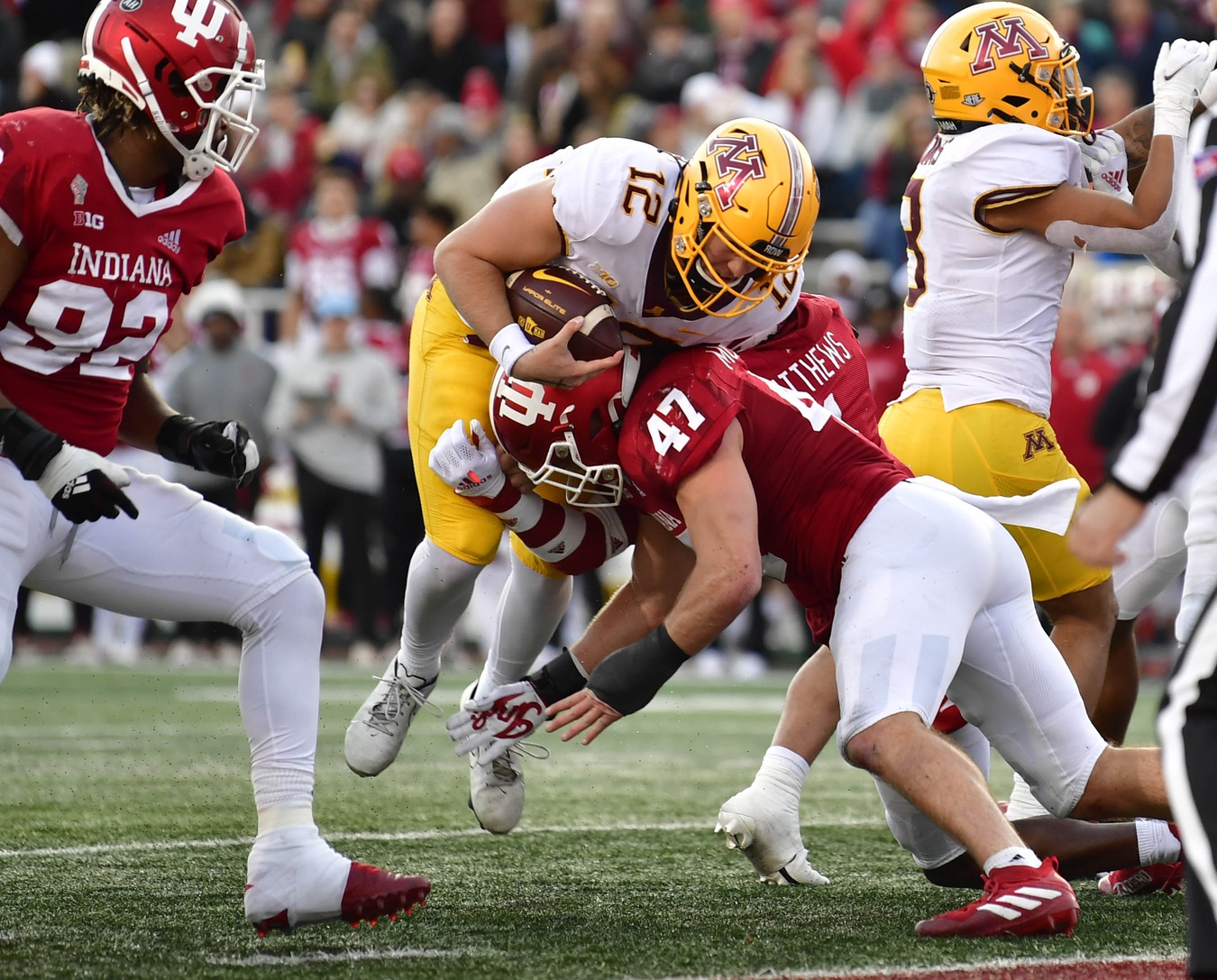 A two-year team captain, McFadden’s leadership ability is off the charts. He gets guys aligned and is the spark plug for this Indiana defense. He is the type of player that projects to a special teams captain at the next level.

McFadden is a unique player in the passing game because he blitzes 80% of the time on passing downs. As a blitzer, he displays very good timing and burst to slip through the line and disrupt the QB. He recorded 6.5 sacks as a senior and consistently wreaked havoc for opposing QBs. When asked, he is good at zone coverage, hitting his landmark and having the ability to tackle anyone in front of him. But he is a liability in man coverage due to a lack of athleticism and length.

McFadden is a good tackler overall. He is best in the box where he is quick to trigger and make plays. He is a sound tackler for the most part but there are times he comes in too aggressive, failing to break down and misses. He is always around the football and always hustles to the whistle.

Indiana’s Micah McFadden enters the draft after a stellar four-year career for the Hoosiers. A three-year starter at MIKE backer where he earned All-American honors as a junior and senior. McFadden has above average size and athleticism for the position but lacks top-end length. A physical, downhill player, McFadden plays the game with his hair on fire and is an attacking player in both phases. In the run game, McFadden displays very good eyes and instincts to diagnose run and is quick to trigger downhill. He is a physical player who has a nose for the football and is a very good tackler in the box. His lack of length and power at the point of attack is evident in the run game as he struggles to deconstruct blocks and will get covered up by bigger offensive tackles.

In the passing game, McFadden is an attacking linebacker who is brought on A-gap blitzes on most passing downs. He displays excellent timing and burst to shoot gaps and make plays in the backfield. His lack of length does appear as a blitzer as there are times he is just a second late to finish. He displays good overall ability in zone coverage, having the eyes and awareness to hit his landmark, and is quick to trigger with things in front of his face. In man coverage, he possesses good straight-line speed but shows stiffness in space as it pertains to changing direction. Overall, McFadden possesses the necessary instincts, toughness, and straight-line speed to be an effective player, especially as a blitzer on passing downs, but his lack of strength and fluidity will make it hard for him to ever become a full-time starter at the next level.

Football I.Q/Instincts: McFadden displays very good instincts and awareness. In the run game, he is quick to read the run and flow to the football, reading the guards and following them to the ball. He takes good angles for the most part and understands how to use leverage to steer the runner inside for help. In the passing game, he displays good instincts in zone and always reaches his landmark.

Competitive Toughness: An active and urgent player, McFadden plays with excellent competitive toughness. He is a heat-seeking missile when he blitzes and he gets home at times purely because of sheer will. He plays the game with passion and energy and it is infectious with his teammates.

Run Defending: McFadden is an above average run defender overall. He plays the game with good instincts which allows him to quickly diagnose runs and get a jump on the ball-carrier. He is a good tackler overall and he packs a punch upon impact. The issues for McFadden are that he lacks top-end change of direction, size, and length, which limits his ability to shed blocks and uncover to make the play.

Block Deconstruction: This is arguably my biggest concern for McFadden. He allows himself to get covered up far too often and doesn’t have an answer to uncover as he simply doesn’t have the strength or power to stack and shed. Bigger offensive tackles can take him for a ride.

Lateral Mobility: McFadden possesses good straight-line speed to roam sideline to sideline when flowing to the ball in the run game. That being said, he is a stiff athlete and doesn’t possess an ability to change direction smoothly.

Flexibility: A rigid athlete, McFadden struggles to change directions and come to balance. He does show an ability to turn and run in coverage and reach his landmark in coverage. His inability to quickly change direction is a major area of concern if you expect him to play in space.

Versatility: His lack of size, length, and athleticism limits his ability to fill multiple roles at the next level. He is best used playing inside where he won’t be asked to cover ground and be in space as often. That being said, his lack of size and strength will be an issue inside as well as a full-time player.