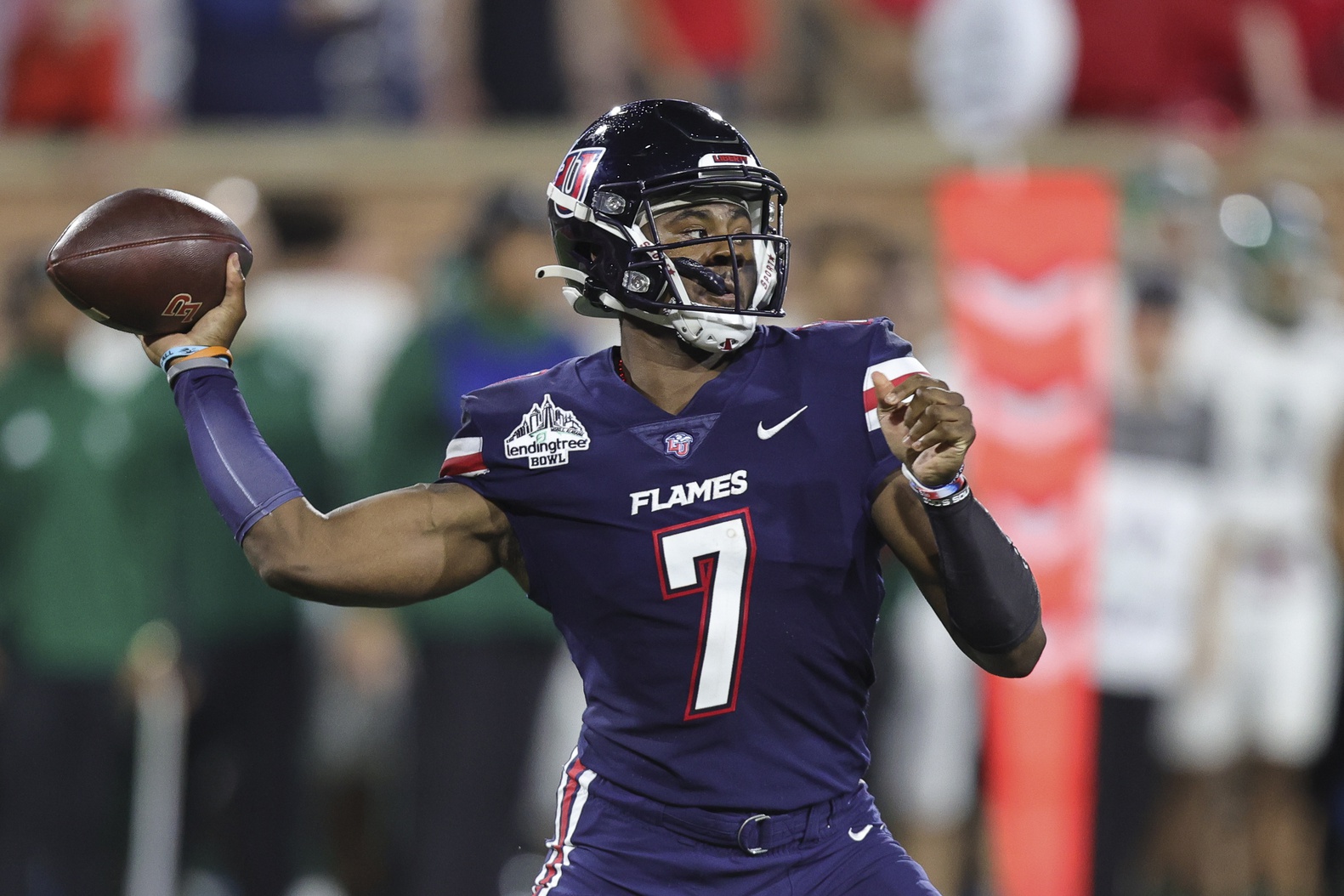 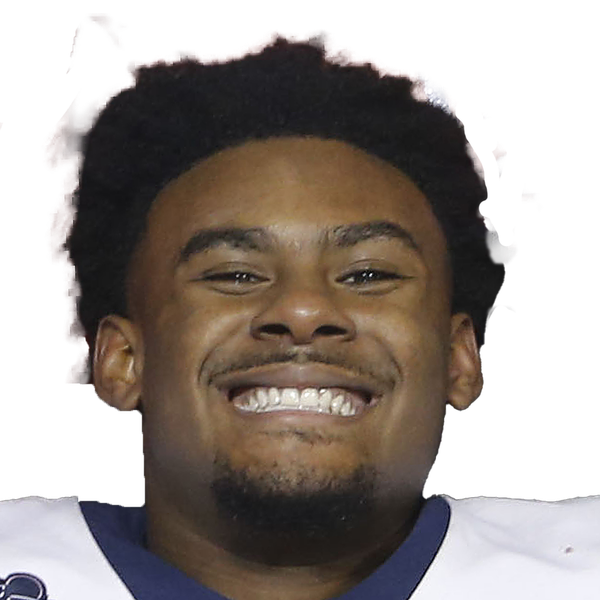 This dude has a cannon strapped to his body. His raw velocity is unreal and he’s capable of casually ripping throws on a rope; I watched him take a hole shot vs. Cover 2 to the field and place it right on the fingers of his receiver some 30-plus yards downfield on a line and beat the safety. He’ll make throws you shouldn’t be able to get away with and his ability to extend plays and access the full field will make him a headache to contain if he’s able to find the right balance of aggressiveness and ball security—he can put it up late over the middle and all the juice in the world can’t help him then.

Willis is an electric athlete at the quarterback position. The raw athletic tools are prominent and easy to identify, allowing Willis to play off-script and create chunk plays or use his quick-twitch ability in the pocket as a “get out of jail free” card against busted assignments in pass protection. His speed to the perimeter in zone read and option looks puts hash defenders in an ultimate bind and prompts a lot of push to the LOS. When Willis turns upfield and into the open, he’s electric and moves at a different speed than the rest of the players on the field; he’s the most dynamic runner at quarterback that we’ve seen since Lamar Jackson.

Willis has the right makeup to be the face of your franchise.

Willis has received rave reviews from more than one person I’ve spoken to about his personality. I appreciated how he handled a couple of questions with the press this season that could have afforded opportunities for interpreted shade at teammates—by all accounts he seems to get “it” on the field and he clearly isn’t afraid to have the football in big moments.

Liberty quarterback Malik Willis is one of the most challenging quarterback evaluations I can remember doing in recent years. Willis is the most physically gifted quarterback prospect in the 2022 NFL Draft, bar none. But his performance on the field in 2021 took a bit of a step back from a ball security standpoint and Willis played in an environment for the Flames that created some challenges.

Willis often failed to get help from his receivers on throws that challenged their catch radius. But Willis too often asked them to win outside their frame. Liberty failed to afford Willis with easy completions on too many instances—but then again, Willis at times forsook them in favor of extending plays with his legs. There is very much a blame salad to be had with Liberty and the challenges that Willis’ quarterback evaluation presents. I do think in an NFL environment, Willis will have a great opportunity to develop into a franchise player given his dynamic physical gifts, but you’re going to need to both tailor your offense to his strengths and be willing to give him the necessary time to develop as a player and elevate his baseline of operations as a quarterback. Willis currently is more of a thrower than a quarterback and he relies on his athleticism to help facilitate and create explosive plays.

I love the fact that he commandeered a tempo-oriented offense and any NFL franchise that brings Willis into the fray would be foolish to not look to amplify that part of his game, where defenses become more vanilla and his athleticism can strain the conditioning and discipline of the defense. The former Auburn Tiger is a two-year starter with the Flames and therefore will need plenty of patience; a team who drafts him to serve as a starter right away will likely be disappointed with the results. In all, Willis has the highest ceiling of any quarterback in this year’s class and in the right environment, I could easily see him becoming a Pro Bowl-caliber player. But his variance of outcomes will very much be dependent on where he lands and the wrong environment may yield ugly results.

Scheme tendencies: RPO and QB-run-heavy offense with featured passing in the shallow areas and vertically down the field.

Accuracy: The irregularities with touch as a passer are the biggest barrier to consistent ball placement. Too many of his throws are unnecessarily hot in the shallow areas of the field and eat up his receivers. Changing the tempo and pace on throws in the short or intermediate areas will help boost his completion percentage, but he hasn’t really shown consistency to any area of the field in this regard. Bucket throws down the field are often driven long when he doesn’t need to put it on a rope and intermediate routes too often miss high and a yard wide of coming in stride, creating ball security issues. But when he’s throwing on the move or asked to drive the ball with heat, he’s got a gorgeous stroke and has thrown his share of dots.

Decision Making: Willis’ eye for the big play is both his best friend and his worst enemy—the Liberty offense was subjected to some negative plays that were easily avoidable. Willis will need to further embrace the value of short gains and throwaways as compared to holding the football too long and allowing opposing rushers to close in around his position. It’s a tight-rope act, one that a lot of highly athletic quarterbacks must walk. There are some lapses in judgment on account of aggressiveness in tight spots with the ball—Willis didn’t meet a throw that he didn’t have the confidence to try at least once. Granted, he’s got a big-time arm, so he slotted a healthy amount of those high-risk throws successfully.

Poise: Willis had good control of his offense for a first-year starter in 2020, but there were some edge and second-level blitzes that appeared to catch him by surprise and caught him with his eyes away from a free runner that resulted in a strip-sack/turnover. I thought this was an area with reasonable improvement in the games studied in 2021 to see pressure and force the first defender to miss, but he then in turn missed too many opportunities to throw hot or embrace the check-down, instead looking to make plays happen with his legs.

Progressions: Liberty’s offense affords Willis ample communication opportunities at the line of scrimmage and the unit’s tempo is persistent after chunk plays to serve as drive-starters, giving Willis the controls to an offense that needs a quick-processing mind at the helm. In game situations where Willis is forced to hold the ball in the pocket, he’s shown a willingness to work through progressions, with eyes moving all the way across the field and at times back to his first read. But when he gets moved off his spot, he’ll often drop his eyes to the field and miss plays working over the middle or down the field.

Release: Willis affords a sharp release. There’s a bit of a slingshot dynamic when he’s throwing off his platform but he’s got big hands and little issue with firmly squeezing the ball if he’s forced to choke a throw and pump, so defenders can’t sit on his hands breaking and get away with it all the time. He’s shown he’s capable of flipping the ball out or working from unorthodox angles as a thrower when prompted by pressure in his face.

Pocket Manipulation: The Flames move the pocket for Willis with frequency and allow Willis to change his launch point to help negate opposing rushers and counteract some of the byproducts of an offense that featured a lot of RPOs and compromised protections. His work as a dropback passer in the heart of the pocket is effective with the first arriving defender but too many times you’ll see Willis get greedy and look to extend plays beyond the first arriving defender and he’ll take on negative plays as a result. The raw ability is through the roof but the efficiency leaves you wanting more, as is the case with much of Willis’ game.

Mechanics: Willis’ footwork and movement in the pocket can be erratic at times and he’d be better served with more calculated adjustments to his lower half to keep his feet in the ground when throwing stationary if he’s forced off his spot. I do think the raw accuracy issues you see him struggle with come frequently from being toesy in the pocket and not getting himself dug in to throw. I think the best thing he can do is calm his drop and movements down within the pocket in order to produce the best results as a thrower. When he’s routine, he’s got easy gas and spins it clean.