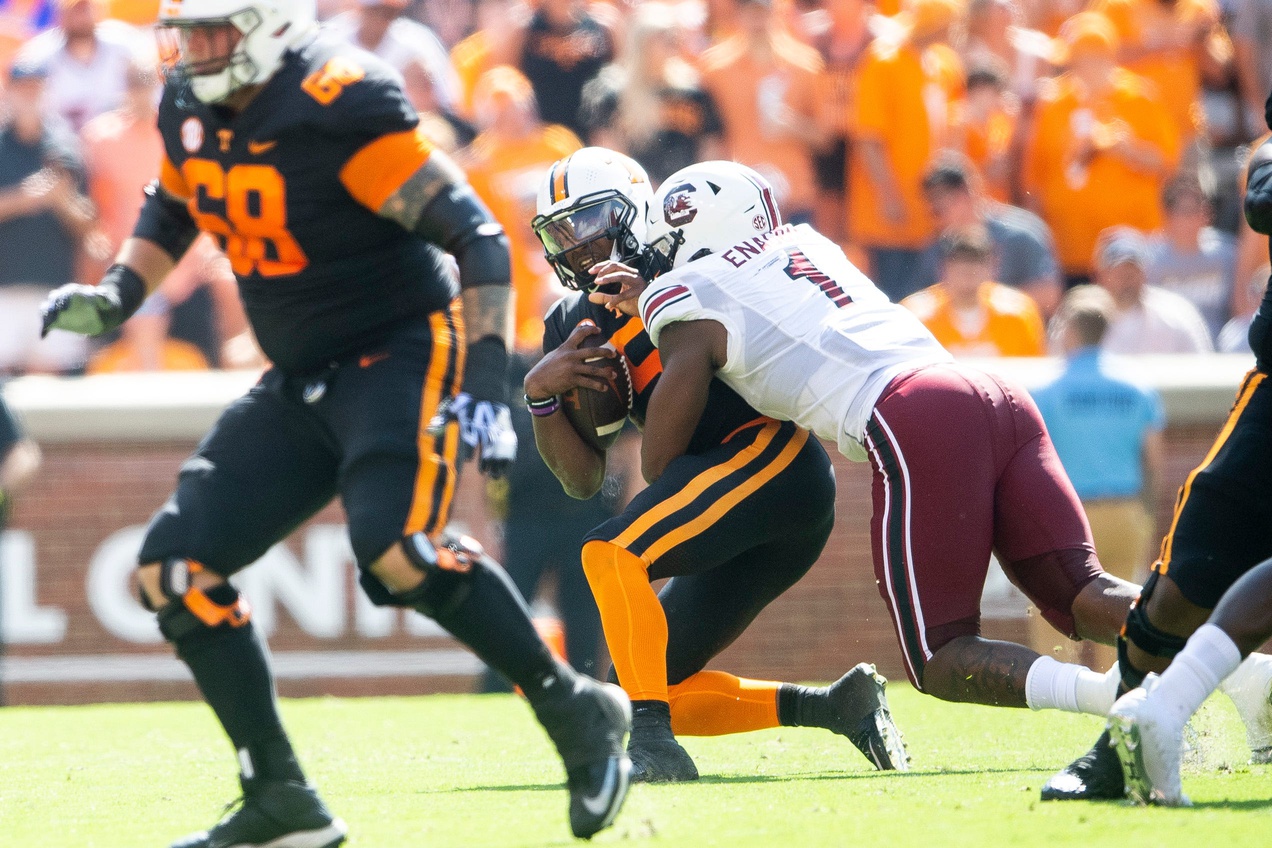 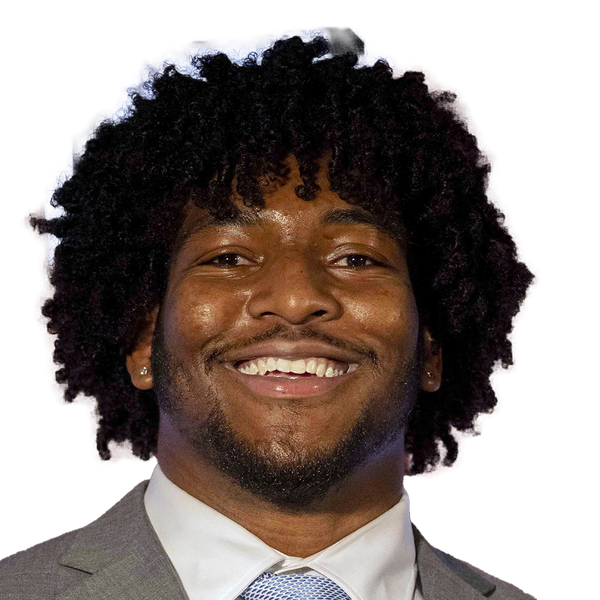 Nearly 35" arms give Enagbare all the length he needs.

Enagbare has good length and does well to use it as a pass rusher in terms of landing his hands and keeping separation to execute his rush plan. His bull rush is largely effective due to his length. I would like to see it show up more when tackling in space and affecting passing lanes.

Enagbare competes and battles on every snap and is never content being blocked.

Because of that sustained effort, he’s able to make plays in the backfield and a fair amount of his sacks have been due to his motor staying cranked. He does dial it up to a higher level at times, but I didn’t come away disappointed in his effort from my exposures.

When he locates his hands, there is notable pop and strength behind them. His placement and power in his hands when executing a bull rush are outstanding.

Kingsley Enagbare found playing time as a true freshman in 2018 and his role in the defense continued to expand from there, eventually developing into a full-time starter across his final two years. Enagbare offers an intriguing blend of burst, length, and power that mostly shows up as a pass rusher, where he finds ways to apply steady pressure. He does well to convert speed to power and use his length to compromise the width of the pocket, get even with the quarterback, flatten, and disengage with good angles.

While he has excellent first-step quickness, he isn’t extremely bendy to consistently corner the outside hip of the offensive tackle and relies on his ability to reduce rush angles. He has plenty of room to expand his pass rush repertoire but it’s easy to appreciate his awareness of his strengths on how he taps into them. As a run defender, Enagbare has plenty of room for improvement where his processing skills are below average. He doesn’t ID blocks quickly and is frequently out of his gap due to tardy responses, high pads, and peeking into the backfield. Enagbare has plenty of experience as a base end in even fronts but also as an outside linebacker in odd fronts operating from a three or two-point stance.

Enagbare is still a work in progress but his foundation of traits and ascension throughout college makes him appealing. He is likely a rotational player as a designated pass rusher that can attack the pocket from a variety of alignments in year one but has the makeup of a starter by year two or three. The key for his development is further growth with hand usage and run defense.

Scheme Fit: EDGE player in a defense that is multiple with its fronts

First Step Explosiveness: Enagbare has excellent first-step quickness which accentuates his linear explosiveness. He’s clean when releasing from a two- and three-point stance with no wasted movement or false steps. He can do more to vary his stride length to set up his rush, but he checks the box in terms of get-off.

Flexibility: Enagbare is loose enough to run the arc and corner, but labeling him overly bendy is too aggressive. He does a good job of reducing his upper half to work around the edges of blocks when the angle is softened. Around the near hip, he does well to flatten, lean into the rush angle, and finish with efficient footwork and a strong understanding of rush angles. He has good ankle flexion.

Hand Counters: Enagbare is excellent at converting speed to power to set up his rush plan. Combining that with his efficiency winning around the near hip with a blend of inside moves makes him a really effective pass rusher. He competes to work counters and clear contact but still has room to grow with timing, placement, and variety.

Run Defending: Enagbare is inconsistent maintaining his run fits, especially when playing 5-technique. There are so many positive reps where he plays with leveraged hips, extension, and fights for his gap, but some lapses in block recognition and processing find him rooted out of gaps. He has to be careful to not get caught peeking into the backfield, which forces him to lose leverage and enables blockers to take control of reps.

Football IQ: Engabare has room for improvement when it comes to processing and play recognition skills. There are too many instances of him failing to read blocks in the run game and he concedes his gap because he gets reached. There are times when he is peeking in the backfield and loses track of his positioning on the field.

Lateral Mobility: Enagbare’s athleticism is more impressive in linear situations. While he isn’t deficient when it comes to lateral mobility, he isn’t springy when changing directions. He isn’t an ideal option to be used in space with frequency.

Versatility: Enagabare has experience as an even front defensive end and 3-4 outside linebacker. In 2021, it felt like he was primarily in a two-point stance as a rush linebacker. He is a more effective pass rusher than run defender, although he isn’t lacking the physical traits to be a good run defender, he just has to process it better.