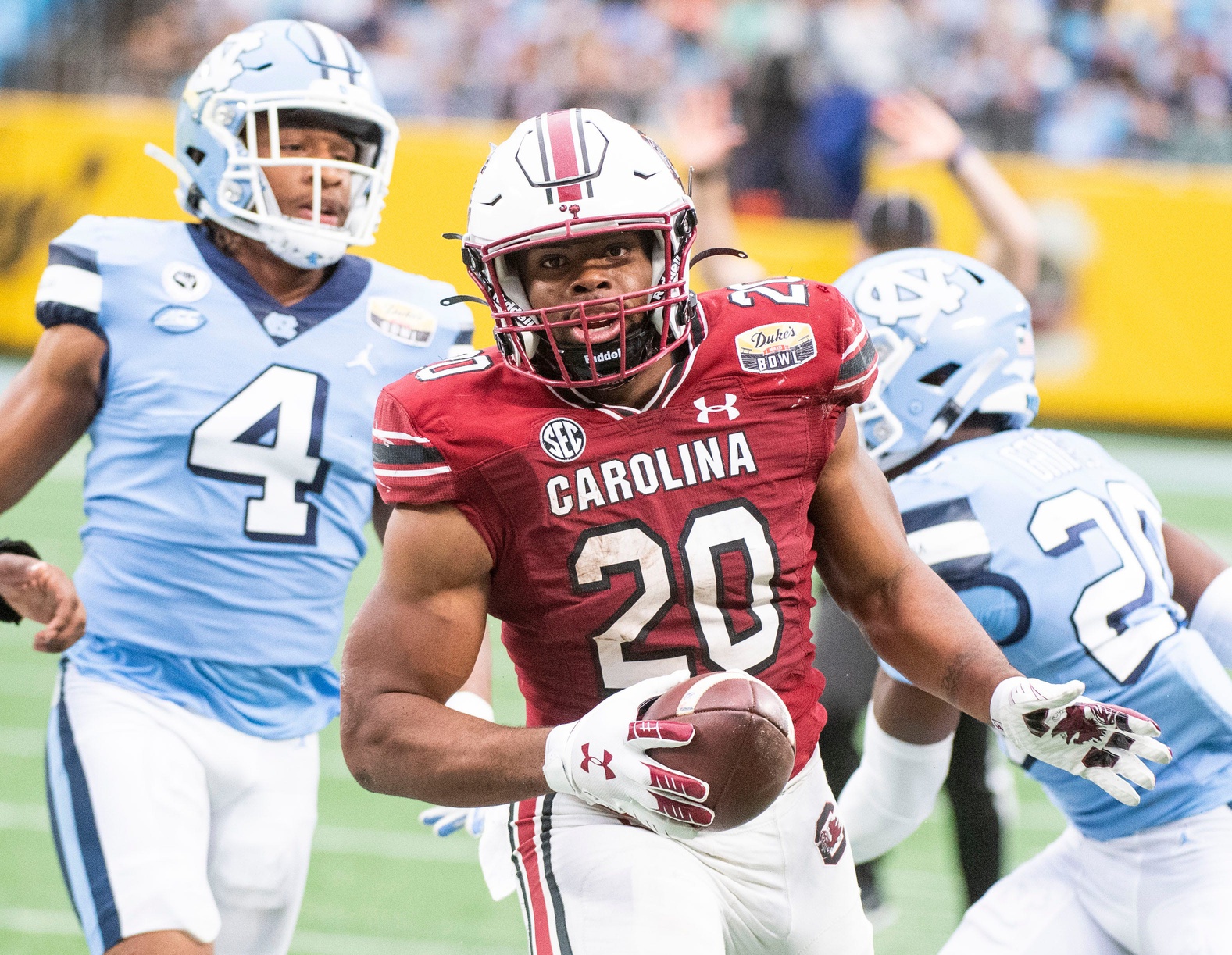 Harris is a physical, violent, and punishing runner. He runs angry with awareness of his style and body composition. He mostly sees the field well with the ability to blend patience with decisiveness.

I love how Harris protects the football with proper technique. In just under 400 touches, Harris had just one fumble. He can be trusted to take care of the football.

Kevin Harris put together a breakout campaign for South Carolina in 2020, where he led the SEC in rushing and collected 15 rushing touchdowns. Returning from offseason back surgery, Harris’ production dipped in 2021 and he shared the workload. Harris is a downhill runner with good vision, power, contact balance, and decision-making skills. He runs angry and has a surprising amount of elusiveness for his body type and running style. He is surprisingly light on his feet and fluid when stringing together moves. When it comes to concerns, Harris has a lot to prove in terms of his ability to contribute on passing downs. While he wasn’t featured at all as a receiver and has only executed a limited route tree with too many drops, he also wasn’t given many reps in pass protection. It’s one thing to not be a dynamic receiving threat, but a back of his stature should provide value in pass protection. He should be a dynamic short-yardage back at the next level that thrives between that tackles.

Vision: Harris sees the field well and naturally responds to how the blocking develops. He has no issues adjusting on the fly and slipping into adjacent gaps when the design of the play is clogged. I like his feel once he clears the first level and maximizes his touches despite not necessarily being a home-run threat.

Footwork: This dude is way more light on his feet than expected for his body type. His legs keep churning through contact and he functions from a balanced base. He angles himself well to attack creases and contact. There is a surprising amount of lateral quickness present and his cuts are fairly dynamic.

Contact Balance: He’s a hammer that will force tacklers to make business decisions. He has a naturally low center of gravity and a powerful lower half, which allows him to absorb and sustain himself through contact. He’s a guy that maximizes every touch.

Durability: Harris was the bell-cow back for South Carolina in 2020 where he carried the load and excelled. That said, he had back surgery during the offseason which will require a full understanding of as his role was not nearly as prominent in 2021. He has the body type and skill set of a player that can handle heavy workloads if needed.

Explosiveness: Harris isn’t one of those backs that is a threat to take it the distance every time he touches the football. That said, he has a second gear once he gets to the open field and has logged his share of chunk plays. Simply put, he’s not a burner but he has enough speed to complement his style.

Versatility: Harris is versatile by scheme, with frequent usage in gap and zone concepts. He didn’t get much work in the passing game or pass protection at South Carolina, so he has a lot to prove on passing downs. He should be dynamic in short-yardage.

Elusiveness: Harris has a surprising amount of wiggle and lateral movement skills. He’s not going to juke defenders out of their shoes in space, but in tight spaces he makes compact moves and he strings things together fluidly. He’s light on his feet.

Passing Down Skills: Harris has a lot to prove in this area. He didn’t get many reps in pass protection and was an afterthought as a receiver. He mostly ran arrow routes and flat routes and he has seven career drops on 48 catchable targets.