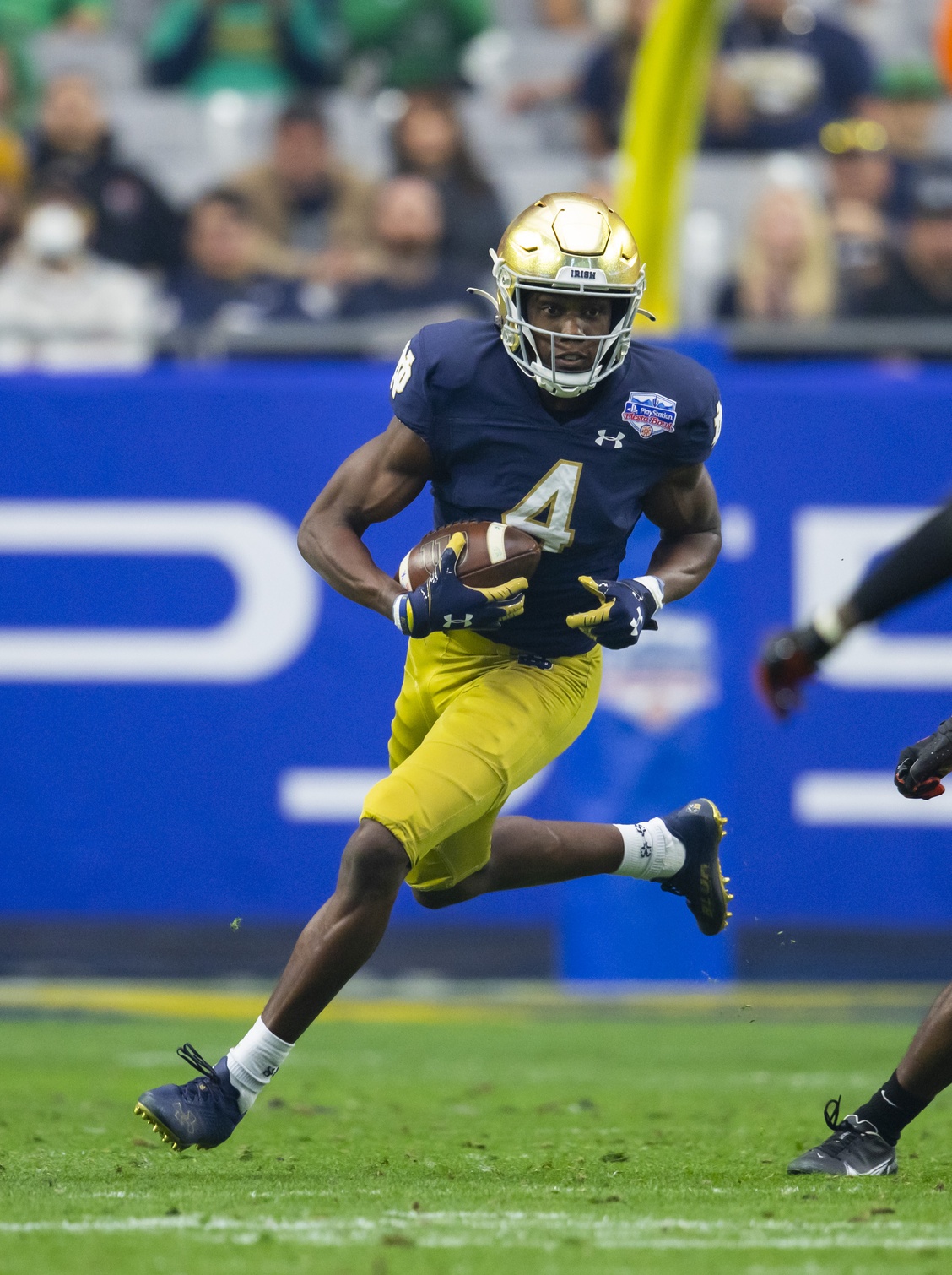 In the instances in which he’s catching the ball in stride, I thought he showcased a dangerous ability to break to daylight. He’s big and runs angry with the ball, on manufactured touches he successfully runs through poor angle tackle attempts.

Notre Dame wide receiver Kevin Austin Jr. enters the NFL as a developmental receiver who may be considered something of a diamond in the rough. Austin Jr’s progression as a college pass catcher has been derailed by unavailability — he was suspended for 2019 on account of a violation of team rules and suffered two separate foot injuries in 2020 that cost him nearly two full seasons of play before a big breakout season for the Irish in 2021. Austin Jr. enjoyed a strong NFL Combine and offers the kind of obvious physical tools that once made him a 4-star recruit from recruiting services out of North Broward Prep in Ft. Lauderdale. A lack of reps looms over his film and threatens to keep him on a long-term developmental plan but 6-foot-2 receivers who run 4.43s in the 40 (plus 39″ verticals and 11-foot broad jumps) don’t grow on trees and as a result Austin Jr. should get a strong look late in the draft.

Route Running: The most impressive routes come with long runways, where he can play physical and stack defenders. Asking him to play on high angles right now is a work in progress and he will struggle to produce twitch and explosiveness when needing to drive out of the break.

Hands: There were some frustrating misplays of the football on his film despite what I would consider to be a plus mentality in attacking the ball. Unsure if it was concentration related or not but I would have liked to have seen better finishing skills in traffic.

Separation: Austin Jr. is a bear to get hands on and successfully wrangle if you’re trying to play him in phase. I thought he was much better vertically than in any other component, even shallow crossers that let him run free away from leverage. He doesn’t consistently win early in the route, either.

Release Package: This is an area for growth. Austin Jr. has the physicality and initial burst to challenge but his ability to set up free releases or force missed jam efforts at the line is irregular.

Ball Skills: Austin Jr. tracks the ball quite well in this regard and he’s at his most dangerous running down vertical shots. Showed a good ability to pick up throws from QB Jack Coan in flight this year and frequently created prime positioning on those plays down the field to alter his pace and accelerate late to the football.

Football IQ: Missing time has certainly created a tough dynamic in his player evaluation. How high is the ceiling for a player who played in 13 games over three seasons? There would presumably be a lot of untapped potential — so Austin Jr. should not be considered a finished product in any way.

Versatility: I’m not sure there’s a lot of appeal as anything other than a developmental receiver. He didn’t play teams and doesn’t seem to have a vast route tree — so Austin Jr. is going to have to blow you away as a vertical receiver early or otherwise likely spend some time on a practice squad and built out his game.

Competitive Toughness: Big, physical and tough to bully if you give him the room to build up some momentum. Admirable effort as a blocker and as a RAC player on quick hitters with free access on the perimeter.

Big-Play Ability: Guys who can track vertically are always capable of creating explosive plays. I’m less worried about his ability to track the ball and create a splash play as I am the lack of diversity to his game that may prevent him from claiming an active roster spot.