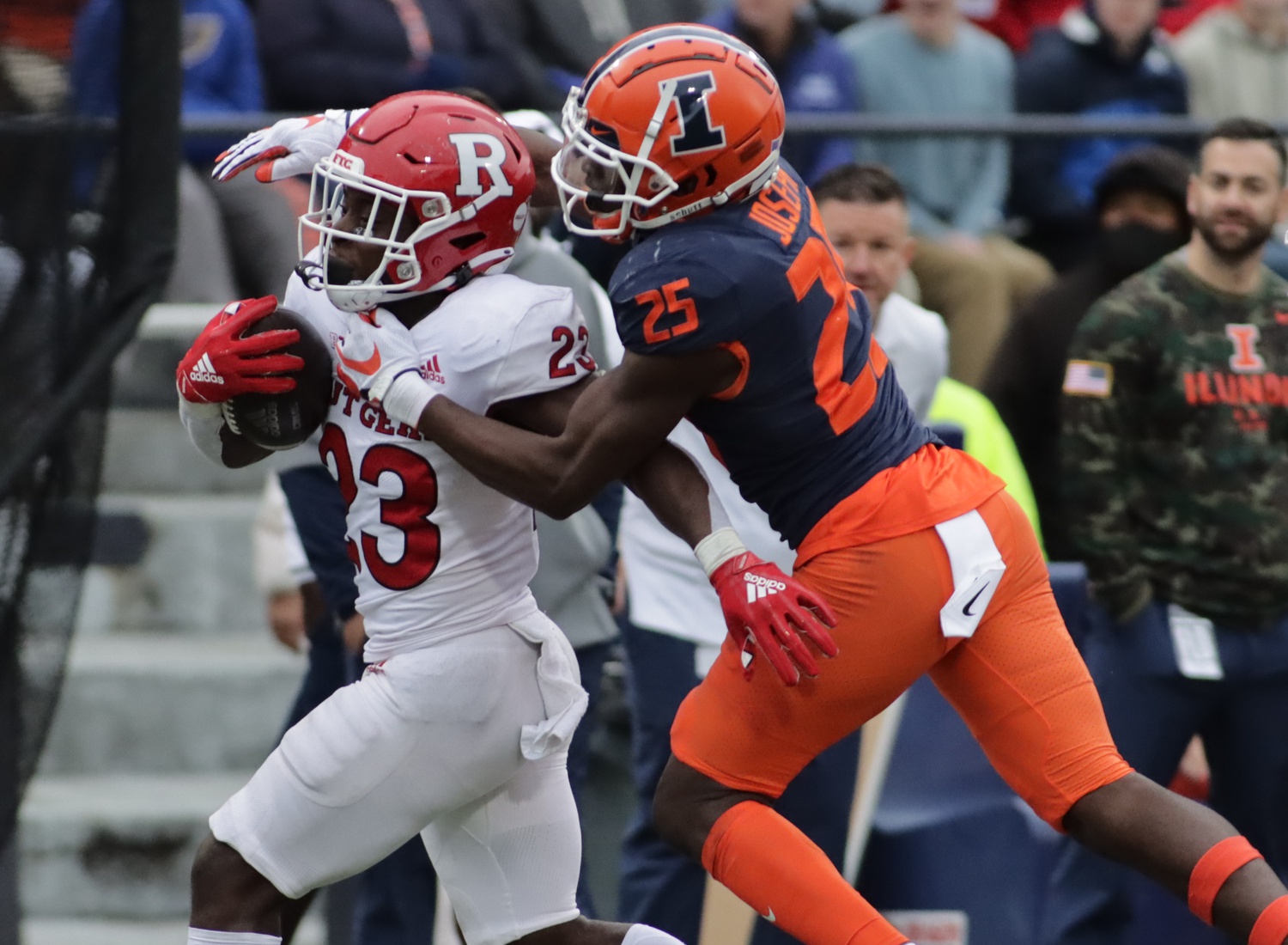 Five interceptions in a season is going to perk your ears up, for sure. His play against Virginia might have been his most impressive, as he closed to the catch point over the MOF and managed to tug the ball away amid a tangled mass of bodies on his way to the ground for a pick near the goal line. He has natural hands and ball skills for a high conversion rate of opportunities into turnovers. This could be the ultimate trump card in his pro projection if he can continue to shine in this area.

Illinois safety Kerby Joseph enters the 2022 NFL Draft as a big breakout performer of the 2021 college football season. Joseph entered the season as a fringe starter for the Illini but by the close of the season, Joseph’s accolades were among the most impressive we’ve seen from an Illini safety in a long time. Just the fifth Illinois safety in the last half a century to be given First-Team All-Big-Ten honors, Joseph forged a reputation for impact plays in coverage thanks to an impressive five interceptions and proved to be quite the ball magnet. But the projection of Joseph to the pro game requires a little more nuance as the sample size of highly-productive play for Joseph is very small and ball production can be hard to project as sustainable year over year if you’re measuring success by interceptions. Joseph, for example, only contested two other throws this season in coverage and managed just six career PBUs. That isn’t to say that he’s not capable of developing into a frequent ballhawk, but I do question the sustainability of his high-end production in 2021. Joseph is a sufficient athlete for playing in the high post and I think he’s certainly got appeal as a developmental player who, with time, could be a starter in the league. But I wouldn’t draft him to serve that kind of role early on coming out of Illinois.

Football IQ: Joseph was able to grow into a featured role for the Illini this season. However, his production and workload are still featured in a small sample size and pro teams targeting him in the draft would be wise to keep that in mind with their early expectations.

Tackling: Joseph was a sufficient cut-and-wrap tackler. I don’t see a lot of explosive hits on his tape and his appetite to fill downhill and aggressively fit the run wasn’t something I was able to get a good sense of. His margin for error is going to come down to implementing his long wingspan as a wrap-up player and taking good angles to the football.

Versatility: As Joseph’s role grew, you did see his usage begin to expand and he started popping up in a number of different places. I’m not sure he’ll make a successful living on the second level in the pro game, however. He likely projects best as an exclusive back-end defender.

Range: I wouldn’t say that Joseph has dynamic range; he’s not necessarily someone who flashes in the open field. I think he can boost his effectiveness here with better transitions and footwork to break to the football.

Run Defending: Calculated is the word that comes to mind. I didn’t see a lot of instances of him negotiating blocks and uncovering in the box. He was often used as a “last line of defense” and I think that role would serve him well. I wouldn’t ask him to bang heads low to the LOS with any consistency.

Functional Athleticism: Joseph is someone I would consider to be a sufficient-level athlete. I think there are some limitations in this regard that could put a glass ceiling on how impactful he can be in the grass, but you also can’t deny the instincts required to play this season and log the kind of ball production he has. If he can continue to develop as a cerebral presence in coverage, he may be able to compensate in a high real estate responsibility.

Competitive Toughness: I can certainly appreciate the competitive toughness Joseph presents as a player in coverage, he’s persistent to squeeze receivers and reduce throwing windows. But I don’t get the sense that he’s an enforcing presence and he isn’t someone with a large presence when played near the LOS. Illinois did, however, play him up on the LOS overtop of TEs on occasion and ask him to disrupt route releases.

Flexibility: Joseph is a high-cut safety who offers good length for the position, but that came at the expense of fluidity in his transitions. He did well to contort his frame and challenge the football when trying to make plays in coverage to optimize his influence.

Special Teams Ability: I can see a pathway for a special teams role for Joseph at the next level but I don’t necessarily think that’s where he’ll have the most chances for success. He’s more calculated with his run fits and selective with contact—not a great combination for playing on the coverage teams. He returned only a handful of kicks during his time with the Illini, too.