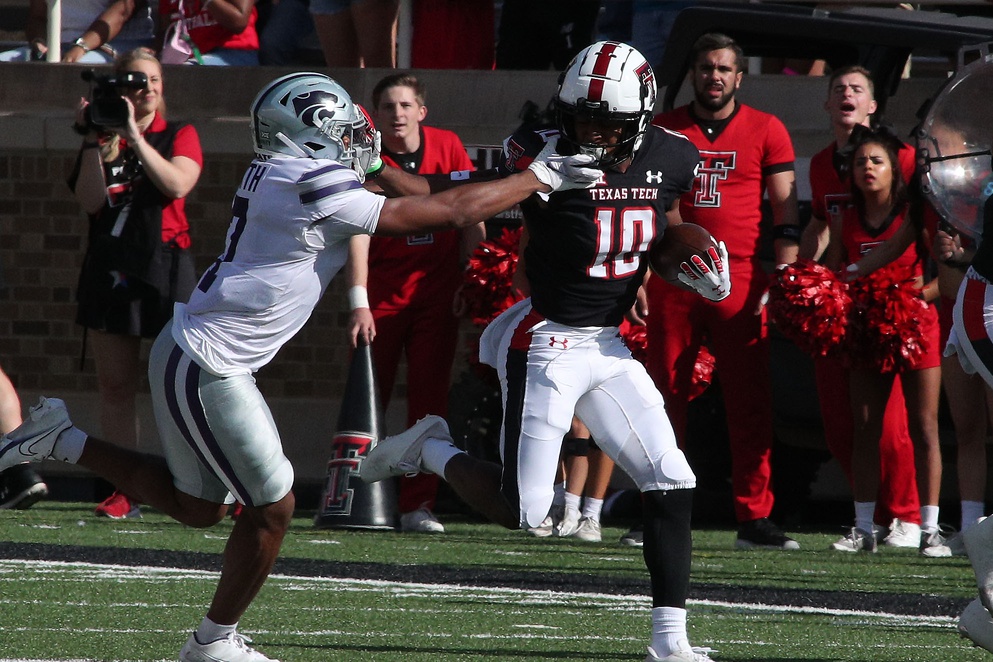 Geiger creates easy separation both down the field and laterally thanks to his very good speed and quickness. He is very tough to stick with in man as he is so quick and shifty as a route-runner. He knows how to set up defenders with leverage then quickly explode and pivot into his break. His speed and suddenness at the top of the route are very hard to defend.

While playing for Temple, Geiger was predominately a slot-only receiver. He was dangerous working the middle of the field and could be a weapon at all three levels of the field. In his one year at Texas Tech, Geiger played outside receiver and proved he can succeed outside as well. He best projects inside at the next level, but he does have the versatility to play both spots as well as contribute to special teams.

Texas Tech wide receiver Kaylon Geiger is an electric playmaker who has enjoyed a productive collegiate career. Geiger started his collegiate career at Navarro junior college where he led the nation in receiving his sophomore year before transferring to the FBS level at Troy University. At Troy, Geiger quickly emerged as the team’s best playmaker and earned All-Sun-Belt honors his junior and senior seasons. Geiger then graduate transferred to play his final collegiate year with Texas Tech in 2021. He’s an undersized slot receiver who displays excellent short-area quickness and burst. He runs excellent routes showing an ability to separate both in shallow and deep parts of the field. He has very good speed to get vertical and can track the ball over his shoulder. Very good ball skills and shows an ability to climb the ladder and play the football. Geiger is dynamic with the ball in his hands and consistently makes the first guy miss with quickness and lateral cuts. He displays toughness as a runner and even though he is undersized, he shows good contact balance to bounce off would-be tacklers. He’s also a dangerous return specialist, which will help him carve out a role at the next level.

Route Running: Geiger is a good overall route-runner who possesses very good short-area quickness and burst to create separation. He is a very controlled route-runner who can sink his hips and explode out of cuts while stopping on a dime. He is shifty, can explode laterally, and is very hard to cover on two-way moves. I do want to see him use more hand swipes when he is working his stem.

Hands: Geiger demonstrates good hands overall. He is a hands-catcher who very rarely brings the ball into his body. He can adjust to the ball in the air and rotate his hands to make sure he secures the catch. He shows an ability to track the ball over his shoulder on vertical routes and also can make catches over the middle of the field.

Release Package: Geiger primarily aligned in the slot, which allowed him to work with a ton of free releases. He was rarely challenged at the line of scrimmage. When he was, he was able to get off cleanly with quickness. His lack of size and length could hurt his ability to get off the line at the next level, but he will likely be a slot-only receiver, which should continue to allow him to get free releases.

Run After the Catch: Geiger’s ability to consistently make the first defender miss is special. He is instinctual with the ball in his hands and is very aware of where the open grass is. He is quick, shifty, and elusive and is very hard to get hands on. Additionally, for a smaller receiver, Geiger has good contact balance to bounce off would-be tacklers.

Ball Skills: Geiger has good overall ball skills. He is able to track and locate the ball as a down-the-field receiver. He can climb the ladder and go up to haul in the ball in contested situations. He also is a kick and punt returner, which further illustrates his level of comfort playing the ball in the air.

Football IQ: Geiger is a smart and savvy football player. He understands route leverage and how to set up defenders during his stem. He can locate the soft spots in zone and knows when to sit or pivot to free himself up for his quarterback. He has good instincts as a runner and makes good decisions as a kick returner.

Competitive Toughness: Just watch Geiger after the catch and you will get a feel for his competitive toughness. He runs hard and is extremely tough to bring down even for a receiver his size. Geiger blocks well and displays very good effort in that phase of the game.

Big Play Ability: Geiger was a big-play machine during his collegiate career. Whether he was taking a quick pass and making someone miss then going the distance or burning a corner on a deep route, Geiger was always a threat to score when he was on the field. I question his ability to consistently win vertically at the next level, but he should still be able to make defenders miss with the ball in his hands thanks to his quickness and shiftiness.