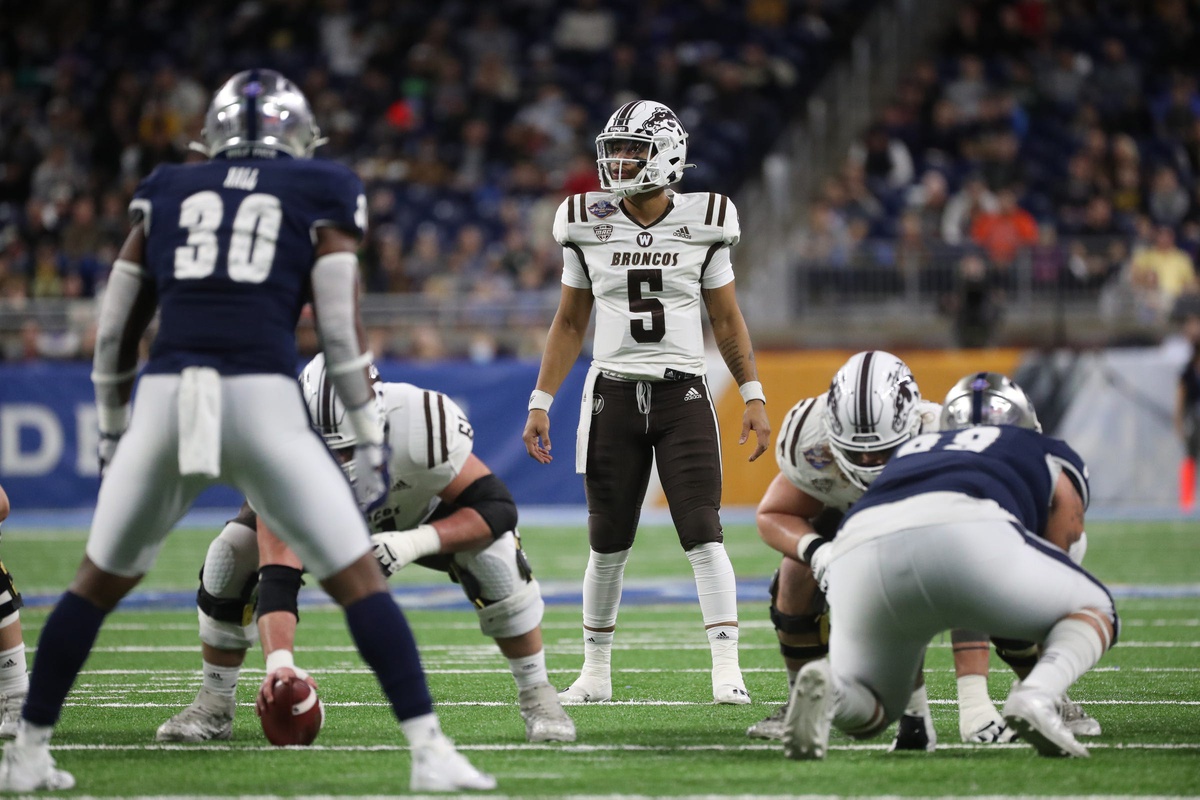 The ability to get off his spot is an element that will definitely aid in his offensive infrastructure and allow teams to slow down relentless pass rushes. He’s good in short spaces and he’s done well to flush through exit channels within the internal confines of the pocket as well as getting up and outside.

Western Michigan quarterback Kaleb Eleby projects as a developmental quarterback in the NFL. Eleby doesn’t check a lot of the traditional boxes for a quarterback prospect; he’s relatively undersized, doesn’t have the strongest of arms, and his level of competition will raise some skepticism as well. But this is a player who operates an offense that we’re seeing more and more of at the NFL level—mesh-point reads, RPOs, and moving pockets all featured as pieces of the puzzle in the WMU offensive infrastructure and it appears as though Eleby at the very least has a skill set worth investing in on a developmental basis. Eleby leaves Western Michigan with eligibility left on the table but I can understand why he, after an explosive 2020 COVID-19-shortened MAC season and his follow-up performance in 2021, felt this was the right time to make the jump. He’s played efficient, productive offense in these past two seasons.

Scheme tendencies: RPO-heavy system with moving pockets and high volume of targets in the MOF

Accuracy: There are too many instances of him airmailing throws when having to step into pressure to deliver his strikes. Out-breaking patterns along the sideline have given him some trouble from time to time when he’s needed to really drive the football with force—with numerous attempts sailing over the head of targets. I think he’s at his best on touch throws in a bucket down the boundary and on spot throws in the middle of the field. He’s shown some nice anticipation to layer throws in stride in this area.

Decision Making: I didn’t see too many egregious decisions to throw into double coverage and I do think his risks are calculated ones. I have seen him throw capped routes versus zone and leave his receivers out to dry a few times, however. His ball security is quite strong, as he only has two multi-interception games in his career (Ohio, 2018 and Ball State, 2021).

Poise: His ability to navigate pressure is something that I think he does fairly well with but his tools could be a limiting factor for how he’s able to salvage plays. He handled a mesh-point miscommunication well versus Pitt when he and the back didn’t take the same side and was able to convert and duck upfield for a few yards. He’s quick-footed but his arm loses some of its appeal if he’s trying to throw off-platform.

Progressions: The Broncos ran an offense that featured plenty of zone read/mesh point and RPO concepts for Eleby. They’ve run them on multiple layers of the defense too, so field vision is something that appears to be a plus quality. He is very much someone who can nickel and dime you all day if he’s in a rhythm and seeing the quick game well.

Release: I think Eleby has a nice, sharp release in his throwing motion. He’s able to hold the ball a little if need be under duress before pulling the trigger. Release point level is something to note as his stature will leave him at risk of batted throws at the LOS.

Arm Strength: Eleby’s arm is one that I would consider sufficient for the pro game. I don’t think the ball explodes off his hand and I don’t think he’s going to have field access if he’s forced off his spot—the field will be cut in half and likely capped at 15-20 yards if he’s forced to roll away from pressure. But he can, when clean, zip throws across the middle and throw with timing to the outside.

Mobility: Eleby can be a bit of a headache to corral. He’s not the biggest, the fastest, or the strongest, but he’s a pretty slick mover in short spaces and does have ample mobility to get outside the pocket and stress defenders in zone with their integrity. He’s not going to blow you away in open-field foot races, but his legs are a level of his game that I think needs to be a piece of the puzzle for him in the NFL.

Leadership: Eleby has two-plus years serving as the starting quarterback of the Broncos and has handled some high-stress game situations very, very well. He led a miraculous come-from-behind victory versus Toledo in 2020 that featured two touchdowns in the final 0:45, highlighted by a fake spike touchdown to win it. He helped engineer a road win over the eventual ACC Champion Pittsburgh Panthers in 2021.

Mechanics: His play-action and RPO rhythm is very good and he transitions out of the mesh point effectively to get set up to throw MOF strikes. His ability to square up to targets when forced off his spot is an area that impacts his accuracy and I’d like to see him have a little more confidence in his ability to absorb contact; pressure creates compensation in his delivery that creates a high spray chart.