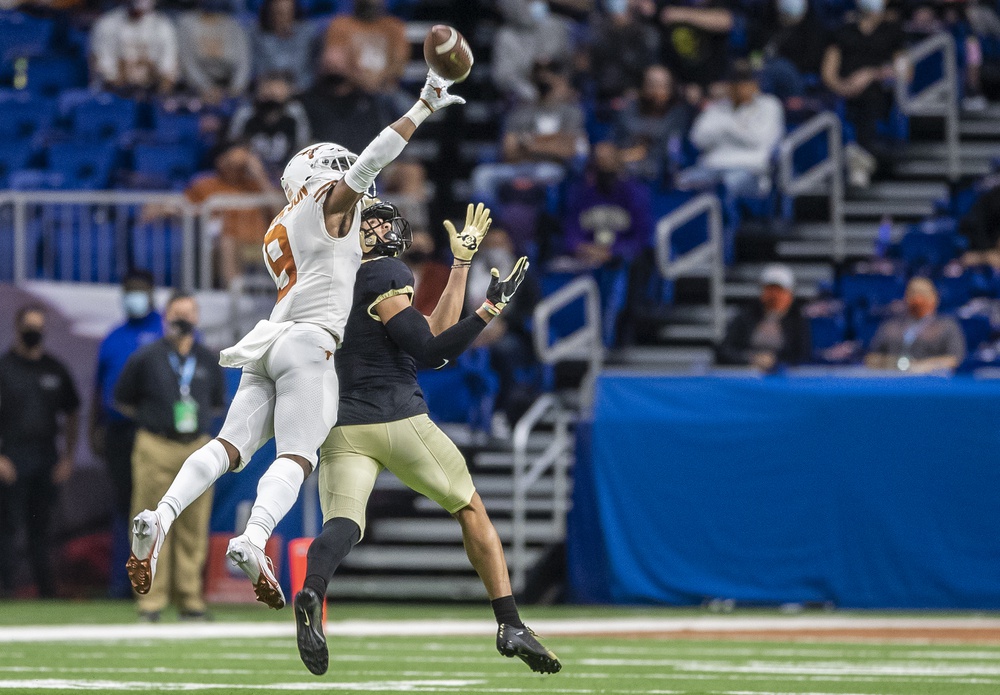 Within this Longhorn defense, they play a ton of zone defense where the corners can keep their eyes on the quarterback and receiver. Thompson has a quick side shuffle that allows him to keep his cushion, and when the ball is thrown he has an above average plant-and-drive ability to close toward the football. On occasion, Thompson will stay in his side shuffle too long and can let receivers behind him before he turns his hips and runs.

Thompson is an excellent tackling corner. Thompson closes full speed to the ball-carrier and will throw his entire body into the action to make the tackle. He has shown exceptional physicality and can be relied on to stop the run.

This player competes at a high level. He works to get off of blocks and make tackles in the run game. He will also throw his body around on run plays to make a tackle.

Josh Thompson is a former 4-star recruit for Texas that chose the Longhorns over other in-state programs such as TCU, Texas Tech, and SMU. Thompson is a five-year contributor for the Longhorns that has played a significant amount of snaps since his freshman year. Thompson has lots of experience and has played more than 40 games during his career. At Texas, Thompson played in a zone defense that allowed the corners to keep their eyes on both the receiver and the quarterback at the same time in order to jump routes and make plays on the ball. Thompson has shown to be comfortable in this system and the ability to come up and make tackles on receivers if the ball is thrown their way. Thompson is a physical player on the perimeter that fights to get off of tackles and is a physical tackling corner. In the NFL, Thompson has value as a zone defender where he can read his side of the field and come up and make the tackle. With Thompson’s physicality, he also has the potential to play safety.

Ideal Role: Zone defender that can come up and tackle in run support

Ball Skills: Thompson plays predominantly in a bail technique where he can keep everything in front of him. This is a safe approach to make sure he doesn’t give up any big plays but doesn’t allow him to be in phase to break up passes because he just simply isn’t close enough. Thompson will occasionally gamble on an underneath route and it’s a boom or bust on whether he either gets hands on the ball to cause a PBU/INT or gives up the double move and a big play.

Versatility: This player’s versatility revolves around his physicality as a tackler. Thompson is a physical corner that will deliver physical blows to ball-carriers if possible. Thompson shows that he may be able to move to safety and be able to play downhill and insert on run plays.

Functional Athleticism: Thompson has average athleticism for the cornerback position. In off coverage, he showed the ability to turn and flip his hips to run with receivers but I question his speed down the field. He has fluid enough hips to play underneath routes but lacks the explosiveness to consistently jump routes to result in PBUs and INTs.

Football IQ: Thompson seems to have a good overall football IQ. In the zone system, Thompson does a good job of keeping his eyes on the quarterback and the receiver to be in a position to break on the football. With this being said, there are times Thompson will get overly aggressive and bite on a double move that can result in a big play.

Run Defending: This player is a good run-defending cornerback. He can shed receivers and step up to make the tackle. Thompson is a physical corner that is willing to throw his whole body at the ball-carrier in order to make the tackle.

Length: Thompson seems to have average length for the cornerback position. His arms are long enough to get an effective jam at the line of scrimmage in press, but there was minimal time I saw him get PBUs using his length to disrupt the pass.