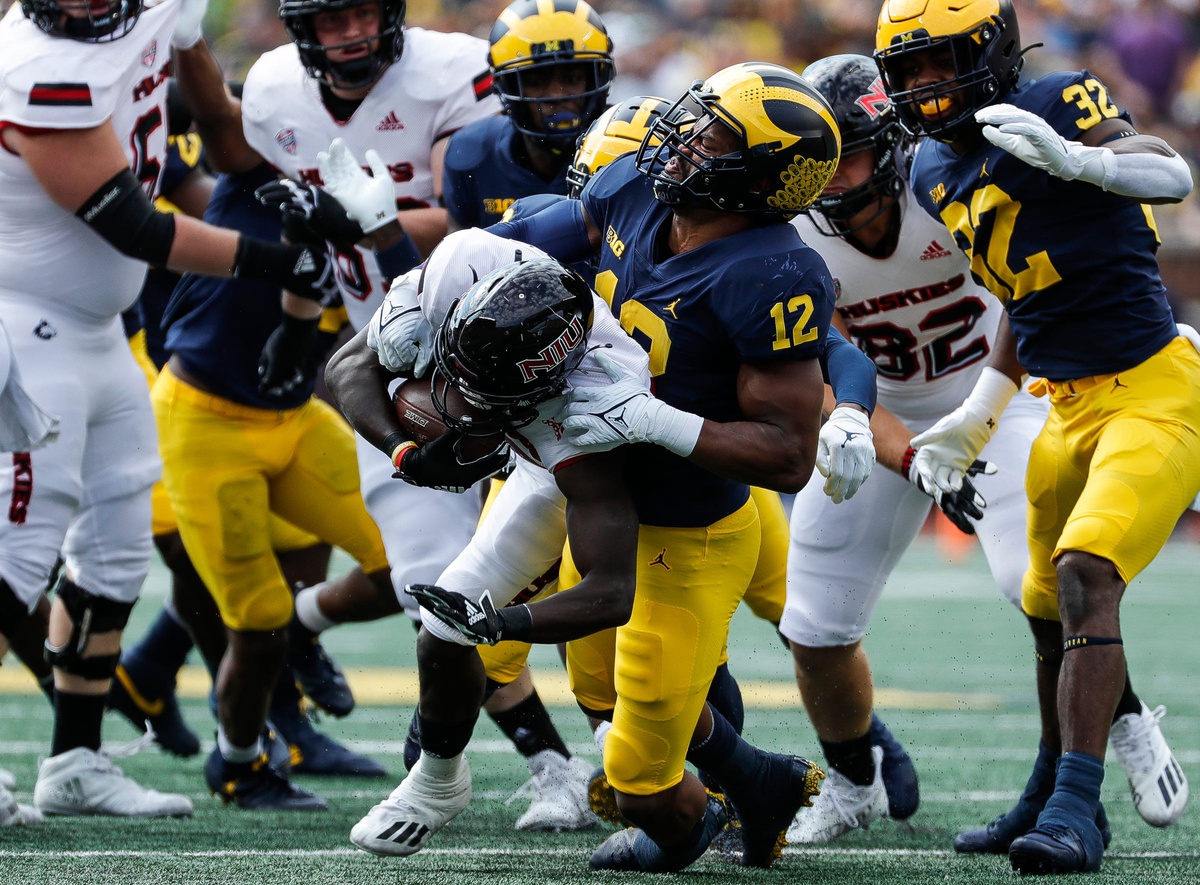 He plays downhill and shoots gaps to create interior surge. Patiently reads and locates the football. Stiffness limits his tackle efficiency in space. Triggers well downhill against the run and flashes in the alley after locating the football. Identifies run blocking patterns and attacks accordingly.

He is a high-level competitor. Constantly participating as a run defender, he plays with high effort and energy. He tenaciously fights through blocks, even when leverage has been lost and rarely gives up on plays—he’s seen on film chasing the football after being removed from the frame.

Projects a 3-4 MIKE linebacker. He can be used in different pressure packages, creating pressure in the A-gaps and off the edges. He adds value and experience on special teams.

Michigan linebacker Josh Ross is one of their vocal and emotional leaders. Ross has been voted as a captain in back-to-back seasons. He’s an experienced prospect with 49 games and 23 starts under his belt. He is a downhill aggressive tone-setter. Ross projects as a MIKE linebacker in a 3-4 defense, similar to Michigan’s. He can operate as a heat-seeking missile after he locates the football. Will deliver a nice blow to the ball-carrier. His game has an old-school feel to it. He punishes lead blockers in the run game to clog up running lanes. He’s an average spot dropper in zone coverage and anything extra should be avoided. Ross is a good blitz option between the A-gaps. His contribution on third downs maybe limited due to his lack of coverage abilities. He will shock and shed blockers to create penetration in the running game.

Football IQ: He has solid instincts overall. He has too many false steps even without play-action—that puts him behind in zone coverage. His IQ is evident as he patiently locates the ball-carrier before triggering downhill, consistently reading and diagnosing if the play is run or pass. He’s an instinctive blitzer, anticipating open lanes to slice through and pressure the quarterback.

Tackling: Ross can generate a good pop on contact. He squares up his target and drives from his hips. He does a good job properly wrapping up the ball-carrier. He’s a tenacious defender that desires to punish ball-carriers.

Pass Coverage: He understands the assignment when in coverage. Shows solid agility dropping to a desired depth. Tight hips limit his potential to be a true three-down ‘backer. He can man up against shorter designed routes in the 3-5 yard range. He does not identify route concepts or routes that enter his zone well.

Block Deconstruction: He uses a combination of physicality and finesse to defeat blockers. He will meet iso blockers and pulling OL in the alley. Stacks, peeks, and sheds blocks with full arm extension. He has a shoulder dip to slip by OL climbing to the second level. When his hands are late, OL can latch, drive, and take him to the ground.

Lateral Mobility: Despite having some hip tightness, he displays the ability to cover ground laterally. He has shown sufficient spacing between his lateral slides. He has solid change of direction abilities and passes off routes before chasing the football.

Flexibility: Inconsistent bend due to hip tightness. An upright mover, he can benefit from sinking his hips more in his stance. Shown decent ability to stop, start, and flip his momentum.

Leadership: He helps make calls and ensure his teammates are aligned properly. He’s an emotional leader that sets the tone. His energy is infectious and raises his teammates’ level of play. Celebrates with his teammates when they make impactful plays.