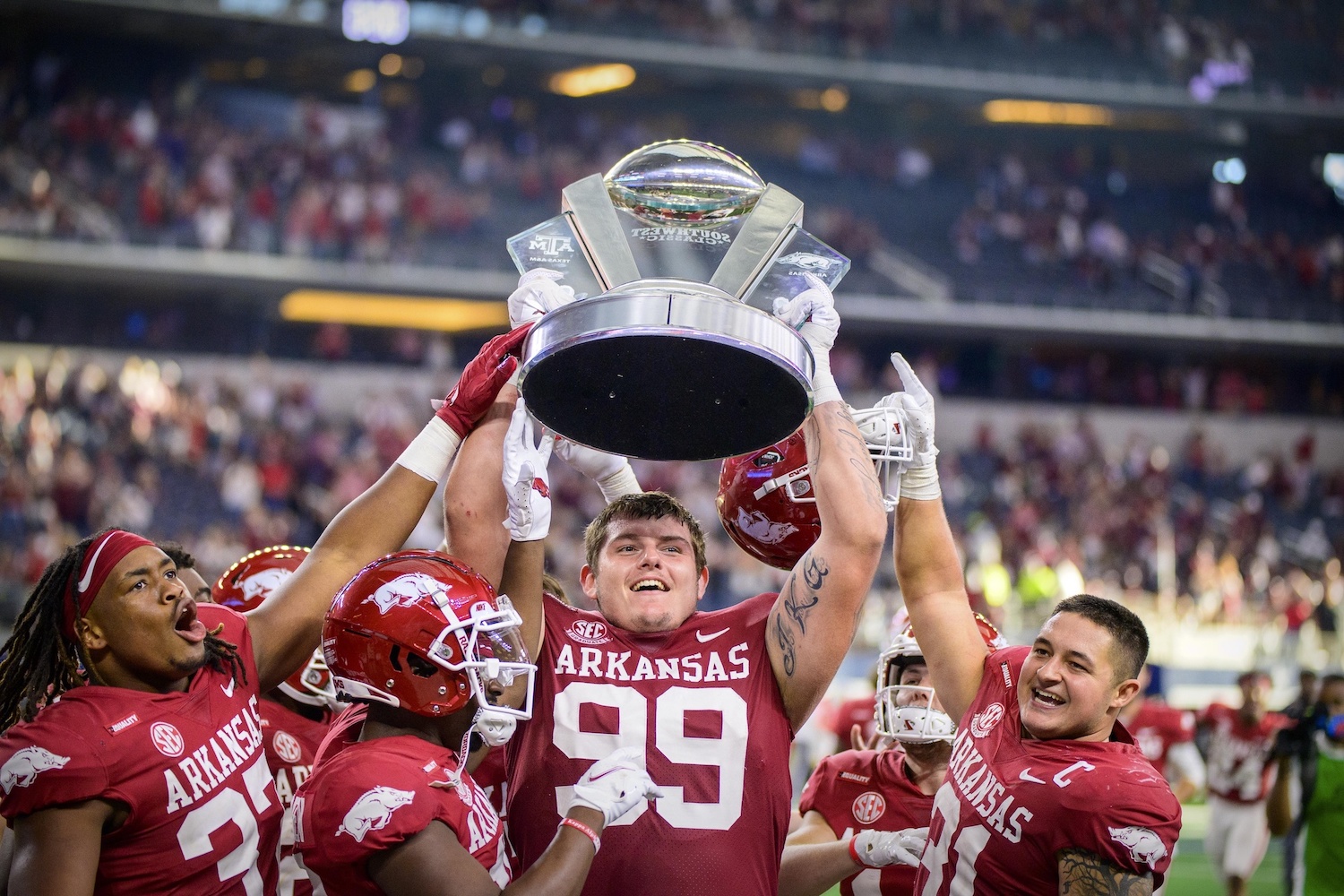 Ridgeway has excellent power in his hands. When he shoots his hands, you can visibly see that he can jolt the upper body of offensive linemen backward, stopping them in their tracks. He can also control offensive linemen with his hands when he has them properly locked-out to play the run.

Ridgeway’s combination of size, power, and natural instincts make him a good run defender. At Arkansas, he plays primarily 0-tech, where he has to constantly take on double teams and he does this at a high level. Ridgeway does a great job at holding the line of scrimmage and preventing offensive linemen from working to the second level, keeping his linebackers free to make plays. In single-block situations, he can properly lock and shed defenders to make the tackle.

John Ridgeway was the starting nose tackle for the Arkansas Razorbacks. Ridgeway transferred to the Arkansas program from Illinois State, where he played for four years. Illinois State played their season during the spring of 2021 and then Ridgeway transferred to Arkansas, so he essentially played two seasons at one time. In his one year at Arkansas, Ridgeway was able to make an impression and took on some of the best offensive lines the SEC has to offer. The Razorbacks played a grueling schedule which was a good test for the FCS transfer, playing programs like Alabama, Georgia, Texas, Auburn, and Penn State. Ridgeway passed the test.

Ridgeway served as the anchor for the Razorback defense and was consistently able to take on double teams and be a disruptive force in the middle of the defense. Ridgeway has natural strength and heavy hands that, when he shoots his hands, can knock back the offensive lineman and literally press their upper body backward. Ridgeway plays in a low stance where he is able to play with good leverage, which makes him a difficult player to move even with double teams. On the next level in the right scheme, Ridgeway can be an immediate starter and can become an instant run-stopping interior defensive lineman.

First Step Explosiveness: Ridgeway possesses a powerful first step that helps him generate power to become a disruptive interior defensive lineman. Ridgeway is able to use this first step to displace offensive linemen into the backfield. Ridgeway is not a quick player but his size combined with his power makes him a hassle to block for both centers and guards.

Flexibility: Even though Ridgeway couldn’t be considered a fluid athlete in space, he is flexible enough to effectively do his job and sometimes be dominant. Ridgeway’s game is centered around power and he can generate this power because he is able to sink his hips and get low into his stance in the leverage battle with an offensive lineman at the snap. Ridgeway is also athletic enough to reset his lower half when he’s fighting double teams to keep his base and power.

Effort/Motor: Ridgeway plays the 0-tech position at Arkansas, which is a position that can take a toll on a player both mentally and physically. But when RIdgeway is on the field, he brings it every snap. Whether it’s taking on double teams or making an effort to bring down the ball-carrier from the backside of the play, Ridgeway gives good effort.

Football IQ: This player plays his position with a high level of understanding. He can quickly decipher between when the offensive lineman is trying to run block him or is pass setting him. He always seems to make the right play and play blocks properly when playing the run.

Core/ Functional Strength: At the point of attack, Ridgeway shows good functional strength, which makes it hard to move him off the line of scrimmage. Ridgeway is rarely moved by one offensive lineman and usually needs two guys to be able to displace him. He also looks to have a strong core in the way he can contour his body and adjust to the different angled blocks that offensive linemen approach him with.

Versatility: Ridgeway’s game is rooted in brute strength and stopping the run, which limits his versatility. I believe that this player has a dominant run-stopping trait but lacks the overall athleticism to be considered an interior pass rusher. This player’s best value will come as a run-stopping interior defensive lineman.