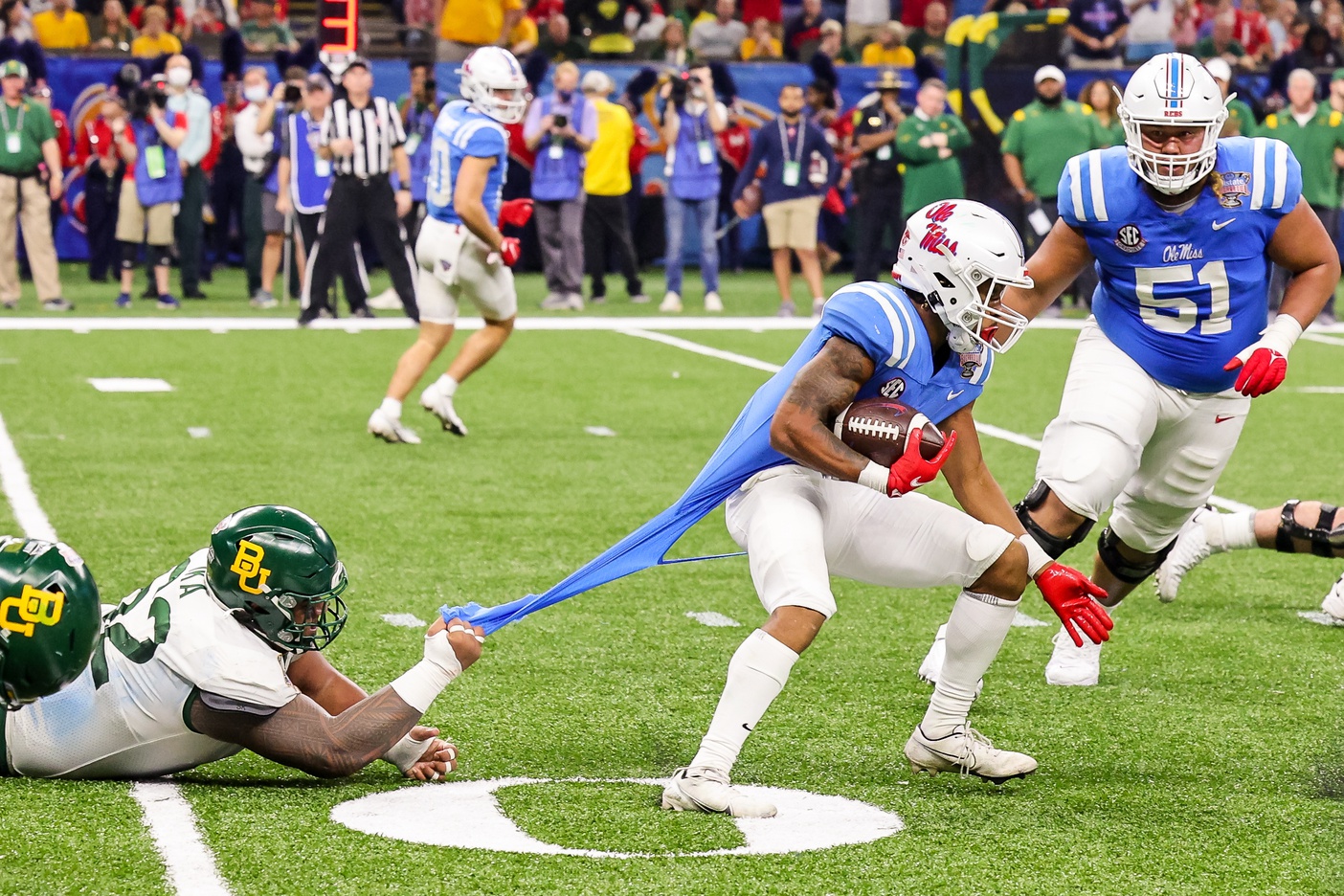 Displays good change of direction skills. Ealy sets defenders up in one-on-one situations. He has forced 118 missed tackles since 2019. His quick feet and stop/start ability create a mismatch in space.

Ealy’s explosive impact can be felt in different ways. He has returned 45 kicks in his career with two 90-plus yarders for touchdowns. Has experience in both zone and gap blocking schemes. The majority of his alignment comes from the backfield.

Ealy has been a consistent big-play threat for the Rebels offense. Over his three-year career, he has 66 runs of 10-plus yards and 34 of 15-plus yards. He also has multiple 70-plus yard runs throughout his career. He has the speed and burst to generate explosive plays at any moment.

Jerrion Ealy is a former 5-star recruit out of Jackson Prep High School in Flowood, Mississippi. According to 247 Sports, he was the No. 3 running back in the nation coming out of high school. He was a two-sport athlete with football and baseball backgrounds. According to MaxPreps, Ealy was a four-year varsity letterman who got plenty of snaps his entire career. As a junior, he rushed for more than 1,700 yards and 32 touchdowns. A true dual-threat RB, Ealy has the receiving ability to be an early impact player on third downs. He is patient with good vision in their zone-oriented offense. He presses gaps and effectively cuts up the field. He lacks size, raising questions regarding his overall role in the NFL.

Vision: Ealy processes and identifies edge leverage well on outside zone runs. Quickly IDing the edge allows him to plant and cut upfield. He is patient and hides behind his bigger OL, affording him the opportunity to read and pick the right gap to hit.

Footwork: Ealy possesses good footwork to fit their blocking scheme. He is a quick planter and cutter. He’s able to generate enough force to jump-cut from opposite gaps.

Contact Balance: While undersized, Ealy is able to bounce off defenders. He runs with enough physical strength to drive through arm tackles, routinely averaging over 450 yards after contact each season for the Rebels.

Durability: At the end of the 2020 season, Ealy underwent shoulder surgery. This caused him to miss the 2021 Ole Miss baseball season. He suffered a concussion that forced him out of the Alabama game and limited him the following week as well.

Ball Security: Ealy has two fumbles in his career. He protects the football in crowded spaces and when approaching the LOS. He’s mindful to switch to the outside hand to create distance between the ball and defenders.

Passing Down Skills: Ealy adds an explosive spatial playmaker to the passing game. He is an underneath check-down option. Has the capability to flex out of the backfield into the slot or out wide to match up with LBs.

Discipline: Ealy is a patient runner that follows his blocks, rarely deviating from the run course. He is not reliable in pass protection. This could limit his snaps on third downs outside of catching passes.