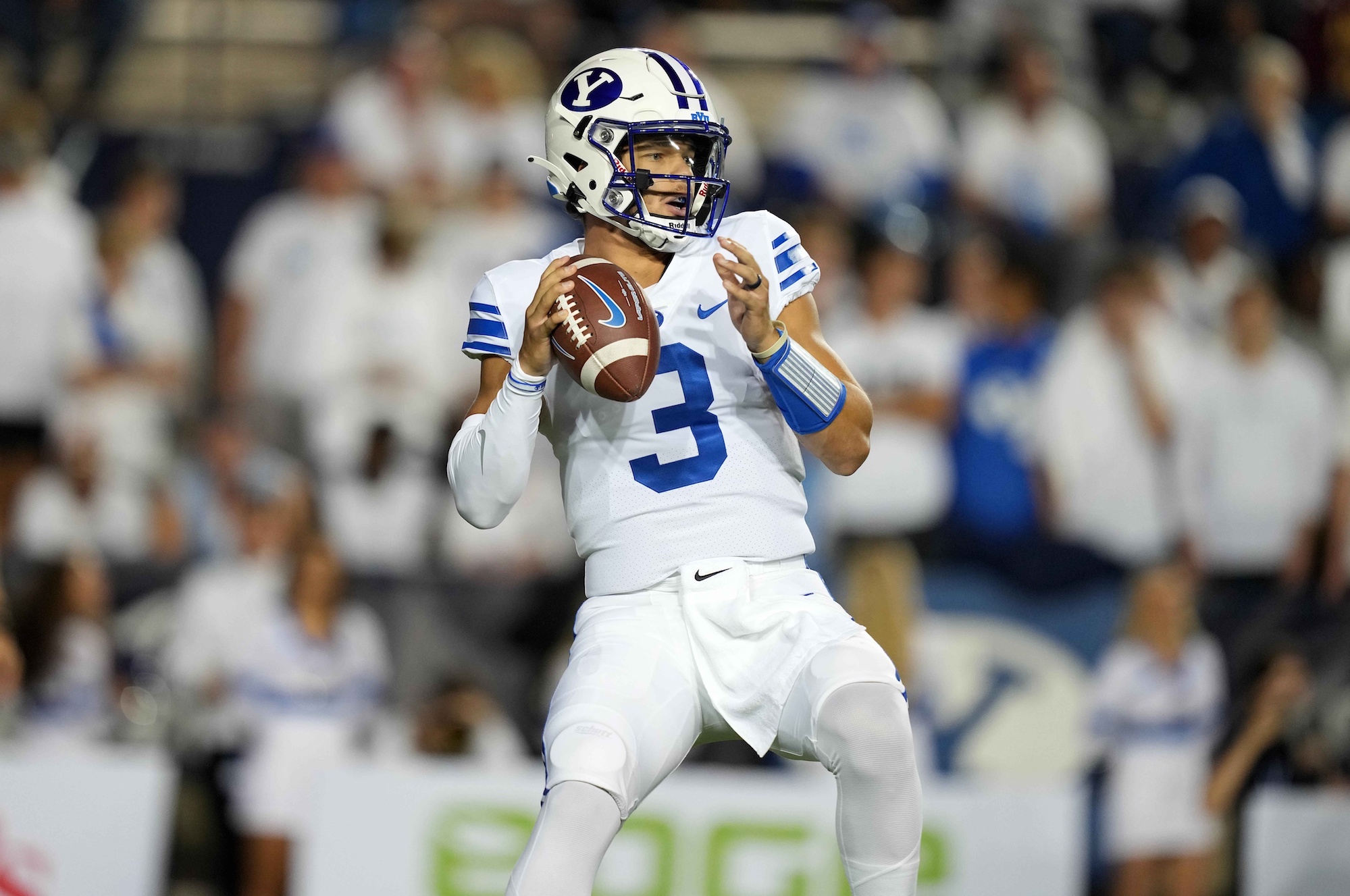 Pros: Jaren Hall illustrated the abilities of a high-level quarterback prospect during his 10 starts in 2021. He oozes potential and did well for himself as a first-year starter with the Cougars. He’s got nearly every proverbial club in the bag as a passer: he can throw with velocity on his platform from the pocket, he illustrates touch working throws overtop of second-level defenders, and can throw with precision accuracy in the shorter areas of the field while rolling out to his right. I was impressed by how many throws he was willing to take to the field last year, pushing throws with velocity and timing to both outs and comebacks outside the numbers. Hall’s instincts within the pocket are quite strong, too—he was more proficient than most first-year starters at keeping his eyes downfield and sliding within the pocket to avoid the rush. This allows him to extend plays at a high level and he’s hit several big plays as a result of moving with the intention to throw and feeling where the pocket affords him room. The baseball background pops too, as Hall can throw from various angles and in crowded pockets if needed and he’s comfortable with adjusting his delivery. Some of his best throws last year came with a blocker and defender in his lap. As an athlete, he’s dynamic. He pulled the ball several times last year (either on designed draws, zone read, or scrambles) and created explosive plays on the ground, including a huge touchdown run versus Baylor on a 4th-and-short near midfield. He’s got all the tools. I’m fascinated to see what this season looks like with contests against Baylor, Oregon, Notre Dame, Arkansas, and Stanford on deck.

Cons: While I would go on the record saying Jaren Hall is tough as hell, durability is a bit of a flag as things currently stand. Hall suffered a rib injury that degraded over the first month of the season into broken ribs vs. Utah and/or Arizona State and he missed two starts as a result. Then, late versus USC, he suffered a lower-leg injury that kept him out of the Independence Bowl. For a player who plays as dynamic as he does and uses his mobility to such great effect, I would be lying if I said that trend didn’t worry me for a player of his stature. Can he add some mass to protect himself? I’d also be curious how the rib injury impacted his ability to push the ball down the field and throw to deeper portions of the field while on the move—I thought throws last season died on him late in the flight path in 2021. But given the throws from a stationary base, I do think his arm strength can accommodate those throws better moving forward. Finally, I did feel as though Hall stood to benefit from polishing his progression timeliness and anticipation of when to ax his early progressions based on defensive leverage and early indicators. The hope is that would come with additional playing experience as a starter.