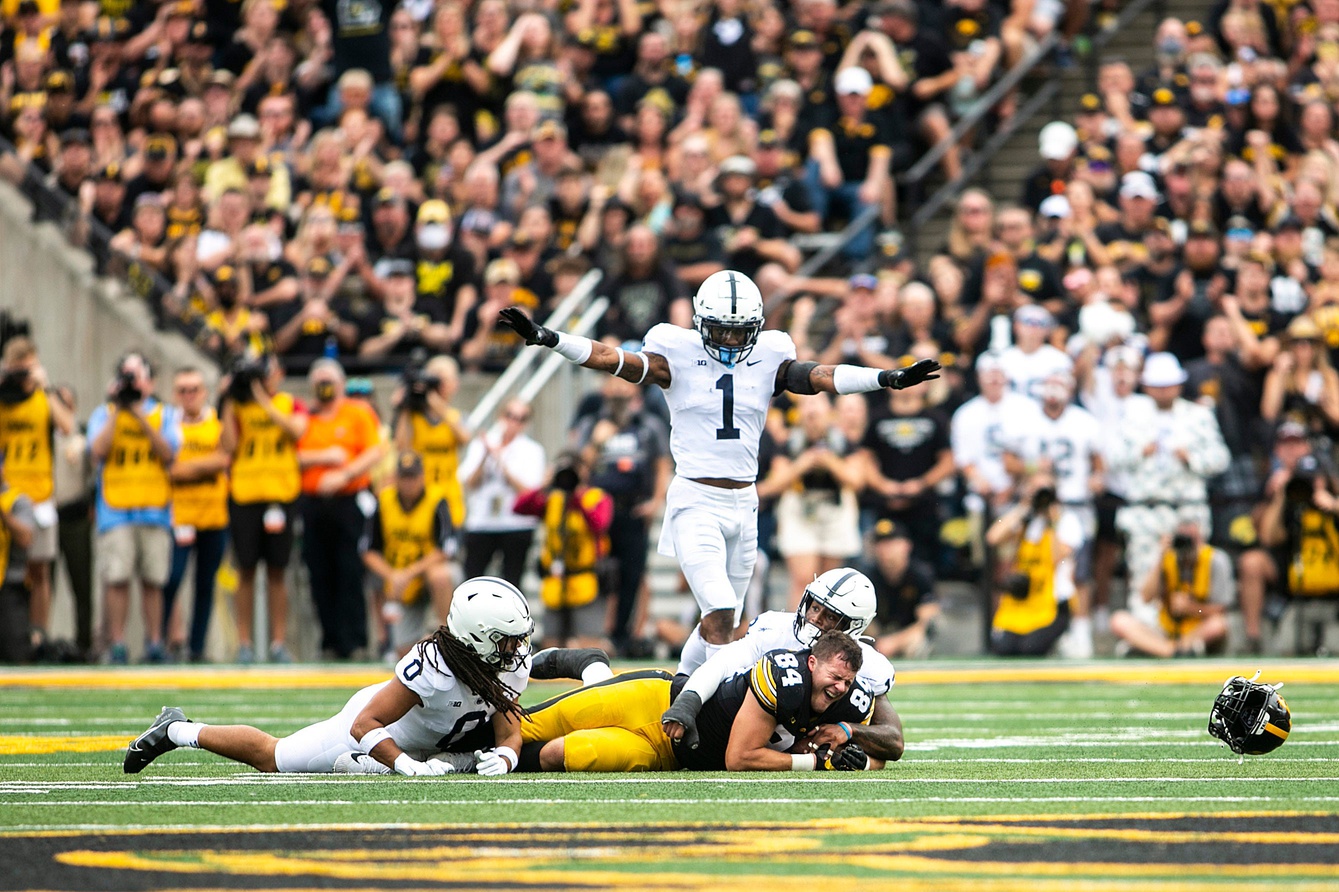 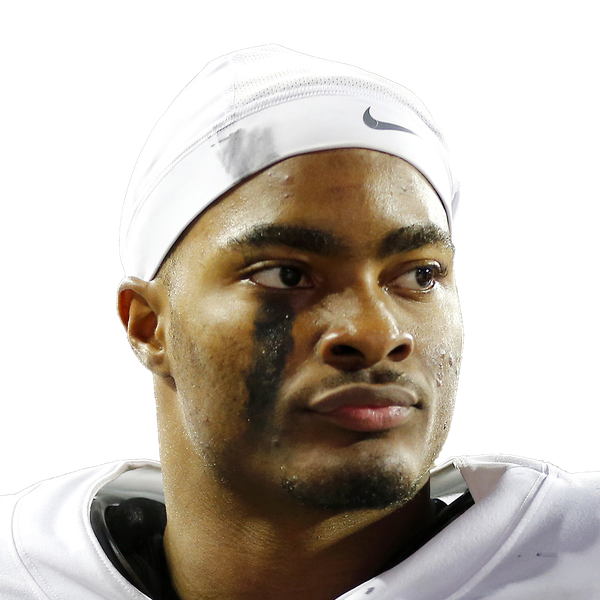 A true jack of all trades.

You’d be hard-pressed to find a role Brisker can’t succeed in. I do think, however, asking him to play as a single-high Cover 1 defender and charging him with playing numbers to numbers isn’t the best usage of his skill set. I do think he’s an athlete that could take on such a role as a part of his bigger usage, however. I’m highly comfortable with him in the box and I’ve seen him scrape and fill backside against power runs in short-yardage completely unbothered by the high-traffic situations. Playing him in low zones will make the most of his ability to influence and hunt throws, accentuating his instincts and putting his length in a position to better contest throwing windows.

A firm presence in the box.

Brisker is excellent in this regard. He’s aggressive to flow, he’s fearless in traffic, he’s made a number of high-difficulty tackles in scrape situations, and he’s violent hitting when coming downhill. Whether he’s a deep safety fitting, a nickel defender, or a WILL linebacker in sub, he’s shown the ability to understand his gap and has shown the punch/pad power to negotiate blocks and uncover to challenge the football effectively.

Tone-setting defender who usually ends up making a splash play when the team needs one. His effort is excellent and the ground he covers is highly valuable to allow him to find the hustle plays needed to always be around the ball. I love the way he challenges both backs and blockers in the run game—he’s got “the dog” in him and plays with a chip on his shoulder.

Penn State Safety Jaquan Brisker would, in most classes, be considered a strong bet for SAF1 on the positional rankings. This is a well-rounded player who has made the most of his time in Happy Valley to develop himself into a “do it all” defender on the back end of the Lions’ defense. A JUCO transfer from Lackawanna College, Brisker entered the 2021 season with a small sample size as a starting player for Penn State but plenty of bright flashes—those bright flashes sustained themselves game over game and week over week, steadily building one of the most consistent and impressive film resumes in the Big Ten for this past season.

Brisker has excellent anatomical length and is a member of The Athletic’s annual CFB Freaks list courtesy of Bruce Feldman—he’s been credited with a 35’5” triple jump and a 10’7” standing broad jump this past summer. Brisker is a leader on the Lions’ defense as well, offering energetic play in all phases of the position. From an alignment standpoint, Brisker has injected enthusiasm in his ability to play in all roles. He’s manned the high post in middle of the field closed coverage in the Lions’ Cover 3 shell, but has made appearances on the B-level in subpackages, including in some short-yardage situations and in the red zone to take advantage of his length, hitting power, and ability to blow up blocks. Brisker has also shown the ability to play in the slot and handle some man-to-man assignments as well, meaning he’s going to appeal to multiple coverage roles and should have a fit within just about every defensive system going forward.

Brisker’s increased ball production is something to be excited about and he’s made a lot of his big plays in big moments on the field—none better than the game-sealing interception in the red zone against Wisconsin to open the season. That play encapsulates a lot of what Brisker brings to the table as a cerebral defender, as his anticipation and recognition allowed him to start on the opposite hash and work into the MOF to undercut the throw and seal a win in the final minutes for Penn State. This would be an exciting addition to any secondary in need of versatility and game-changing plays.

Football IQ: I’ve been highly impressed with the growth shown by Brisker this season in this area to have more anticipation and put himself in position to create more plays. But it is the breadth of responsibilities he’s been trusted with that is most impressive—he’s got a vast menu of roles to fill and his comfort in both coverage reps and fitting the run from multiple alignments is very impressive. I feel good about his ability to step into an every-down role early on and be an early starter as a result.

Tackling: Brisker’s tackle radius is significant. He’s a long defender who has good acceleration to close ground and square up his hits. He’s not just a wrap-up tackler, either. He’ll smack the taste out of your mouth when running downhill or attacking the line of scrimmage. He’s been able to make a significant impact in the backfield this season as well, logging six tackles for loss and many of them have seen him serving as the aggressor. He’s capable of being a tone-setter in this regard, although there are some instances of his eagerness getting the best of him and compromising his fit and angle to the football.

Range: There aren’t too many instances of Brisker conceding room vertically but his transitions do stand for a little more polish to help him spring and contest deeper throws with more consistency. I like him better in the low hole at this point but Cover 3 MOF assignments should be unproblematic and his athleticism and length will provide him with added influence and the ability to find his way into the catch point.

Ball Skills: Ball production hasn’t been problematic but it has also steadily improved over the course of his time at Penn State. The physicality he plays with when arriving at the ball is going to be helpful in his bid to continue to break up more passes in coverage. His awareness to attack the ball and stay aggressive should allow him to prevent missed opportunities. I think, despite his age, he’s someone who is still blooming as an instinctual player in coverage and he’s going to continue to find the football more; he’ll make those opportunities count.

Functional Athleticism: Plus level athlete who has sufficient deep-middle range and is plenty twitched coming down into the LOS. The areas in which I think he stands to get better are his deep transitions and when he’s playing catch coverage in the slot; he’ll be fine against tight ends but asking him to play catch against quick-footed slot receivers will amplify some of the length in his strides to flip his hips and carry. I do not, however, think this is a handcuff but rather an inefficiency that can be improved.

Flexibility: I have little to no issues with Brisker’s movement skills and body control. He’s capable of extending and lengthening himself to adjust to the football or challenge ball-carriers effectively. I see plenty of looseness in his hips rotationally to help boost his ability to transition and attack but he can be a bit high-hipped at times and his strides and steps aren’t the most buttoned up I’ve seen from depth. I believe these are fundamental issues and not anatomical restrictions.

Special Teams Ability: Given his style of play, I have no doubt that Brisker is capable of playing on teams, particularly on the kick coverage units. Whether or not a team is comfortable with that role for him is likely going to be predicated on how big of a role he has defensively. He handled return duties in high school (five touchdowns in 2016) but that has not been a part of his role since arriving in Happy Valley.