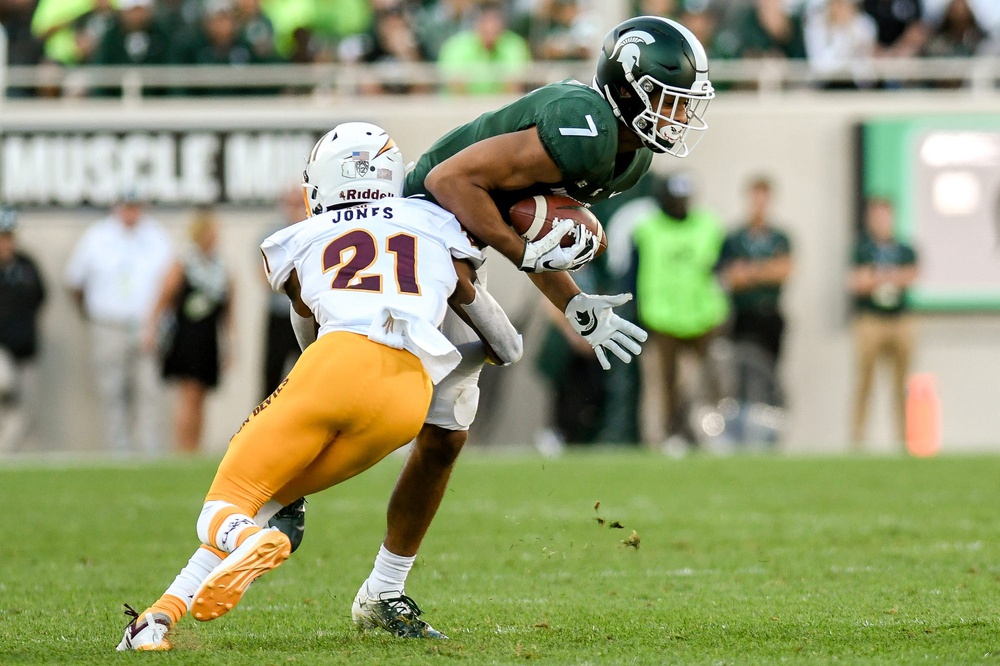 Jones has excellent ball skills and playmaking ability. Jones has recorded 10 interceptions over his career and the ball naturally finds him. He has good hands and body control and can make the tough interceptions look easy. Additionally, when he secures the ball, he looks to return it to the house as he has very good run instincts and athleticism—this is evidenced by his work as a returner as well.

Jones is an outstanding athlete who demonstrates outstanding foot quickness and change of direction ability. He is a smooth and fluid athlete who transitions with ease and can open up his hips to turn and run. He is explosive in short areas and has good vertical speed.

Jones is an instinctual football player who shows good football I.Q. He understands his assignments in zone coverage and has good spatial awareness. There are times Jones takes unnecessary risks and tries to undercut passes, which leads to completions.

Arizona State’s Jack Jones is a well-traveled prospect who has had to overcome adversity to get to this point in his football career. A 5-star prospect out of high school in 2016, Jones signed with USC and immediately was a contributor, seeing time as a true freshman before earning a starting role as a sophomore. In his second year with the Trojans, Jones led the team with four interceptions. Jones was then kicked off the roster in the spring of his junior season due to academic issues before finding himself in trouble with the law that following summer. He then transferred to Moorpark J.C. where he played one season in 2018 before transferring to ASU. In his first year with the Sun Devils, he again was an immediate contributor, earning Honorary Mention All-Pac-12. Jones then put together two more strong seasons in 2020 and 2021, cementing himself as an NFL draft prospect.

As a prospect, Jones is an undersized corner who has outstanding overall athleticism. He is an effective man-cover corner with outstanding foot quickness, fluid hips, and change of direction. He is a sticky cover man who can mirror in and out and has very good speed to carry vertically. In zone coverage, he is effective with his click-and-close ability and his instincts are good overall. Jones flashes excellent ball skills and is a threat to score with the ball in his hands. His overall lack of size, length, and strength show up in contested-catch situations as well as at the line of scrimmage where he can get overpowered by bigger receivers. Additionally, while he is a willing tackler in run support, he can get bullied by bigger backs who can simply overpower him. Overall, Jones has natural coverage ability that you can’t coach thanks to his cat-like feet, oily hips, and closing burst, but his lack of size and strength will always be a concern at the next level.

Man Coverage Skills: Jones is an excellent man-cover player as he possesses the necessary athleticism to stay sticky in coverage. He has excellent foot quickness and fluidity and can change directions and mirror route patterns with ease. He stays connected through the route and is explosive in short areas to close and break on the ball. His lack of size, length, and strength does show up when he is challenged at the line of scrimmage and at the catch point.

Zone Coverage Skills: In zone coverage, Jones displays above average eyes and instincts while showing excellent closing quickness to break on the ball when a pass is attempted in his area. A smooth and fluid athlete, Jones moves well in space and gets good depth in his zone drops. He will occasionally get baited by quarterbacks and will be over-aggressive and lose zone discipline.

Tackling: Jones is undersized and lacks strength at the point of attack. While he is a willing tackler who displays toughness in spite of his size limitations, there are times where Jones simply gets bounced off or stiff-armed. He is an average tackler but not a liability.

Versatility: Jones has primarily played outside corner in his collegiate career even though he lacks ideal size and length. He is able to succeed outside due to his top-end athleticism. However, his lack of length will certainly be a factor when asked to match up against receivers with good height and length. Jones has the quickness and toughness to transition inside but is a projection as he has yet to play inside at a high rate.

Competitive Toughness: Jones is a tough corner who doesn’t shy away from a challenge. Even when lined up against receivers who clearly have the size advantage, Jones is never panicked and will always compete. He is a tough player in the run game who isn’t afraid to stick his nose in the pile.

Jones is an instinctual football player who shows good football I.Q. He understands his assignments in zone coverage and has good spatial awareness. There are times Jones takes unnecessary risks and tries to undercut passes, which leads to completions.

Run Defending: Even though Jones is undersized, he isn’t afraid to help out in run support. He is quick to read run and shows no hesitation when coming up to help on the outside. He is a wrap-up tackler who will sometimes get bounced off of by ball-carriers due to lack of size and strength.

Length: Jones has below average length and size for the position. His lack of length hurts him when he is in contested situations and when he is asked to press on the line of scrimmage. He makes up for his lack of length with excellent athleticism but it will always be an issue, especially when he is lined up outside.