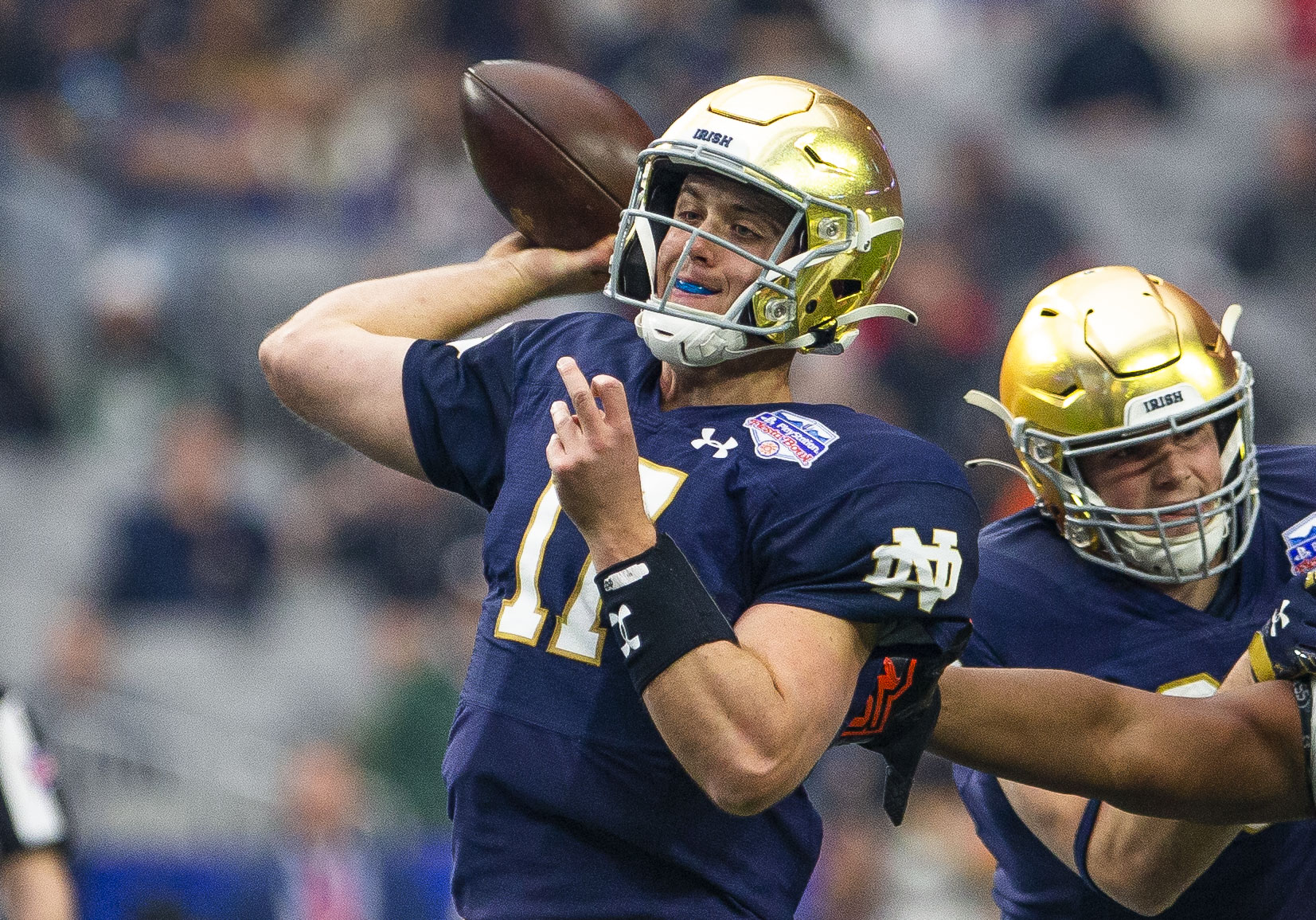 The ball security has been strong through Coan’s two seasons as a starter and I do appreciate that he’s been able to show judgment and eat the football to take sacks when necessary as compared to throwing up a prayer. I think he can be overconfident at times in tight windows, particularly down the field.

The ball offers good pop off of Coan’s hand when he’s triggering throws. Deep throws come with easy juice and his intermediate throws into tight windows offer very good spring to zip in and beat squatting defenders in zone coverage. He’s capable of hitting most throws on the field from a clean base.

This dude is tough as nails and has the kind of demeanor you love to see in a quarterback. I love that he’s taken over two separate teams and been able to elevate the passing game in both places—even with his limitations physically. Coan is highly regarded in this regard and he should pass with flying colors for all teams.

Notre Dame quarterback Jack Coan projects as a developmental quarterback for a vertical passing offense in the NFL. Coan has taken snaps as the starting quarterback with both the Wisconsin Badgers program and the Notre Dame Fighting Irish—he finished his career in 2021 with his best performance to date in the Irish’s passing game, where he enjoyed a step up in the options in the passing game. But it was Coan’s leadership and toughness that most impressed me about his season with the Irish, taking a pummeling at times behind an underwhelming Irish line. No instance better showcased Coan’s toughness than in the final two minutes against Toledo, when Coan dislocated a finger on his throwing hand during a late possession, jogged to the sideline to have his finger reset, and then came back out to throw the game-winning touchdown pass on the very next play. Coan has endured injuries before, as well. He missed the 2020 COVID-shortened season with a broken foot and lost his starting job to Graham Mertz, helping to push him to Notre Dame. Coan is a former lacrosse player who originally anticipated playing that sport before enrolling at Wisconsin. Traditionalists of the quarterback position are going to love Coan’s draft profile—you’d be hard-pressed to find a prettier five-step drop and release on deep shots down the field in this year’s class. But that “traditional” skill set comes with some limitations that are unfriendly to today’s quarterback landscape, meaning Coan must find the right blend and balance to be effective moving forward.

Accuracy: I would say that Coan offers sufficient accuracy to all levels of the field. He’s got plenty of arm strength so his velocity isn’t a restricting factor that compromises his mechanics to throw hard. Where his issues seem to arise is when he’s forced off-script or has to hurry his process due to pressure.

Poise: Winning off-script and creating plays for himself is not something I’d consider a strength. He stands tall versus pressure to survey the field but he is, generally speaking, nowhere near as effective with the chaos as compared to a clean pocket. Pressure has caught him by surprise on some occasions and I’d love to see more anticipation in the pre-snap.

Progressions: You’ve seen plenty of instances of him moving his eyes and working across the field. As you’d expect, he’s most effective and aesthetic when he’s queued up on his first read. His anticipation for getting his eyes right versus pressure is something I’d consider a work in progress and will need to continue to show progress to keep him out of pressure situations where his play can go sideways.

Release: He does need a bit of room to operate because of his size and there are some limitations worth noting that won’t make him a universal fit. If you ask him to run play-action or take mesh point reps, he’s going to take longer than you’d ideally like to get the ball out and his timing in quick game or working to the perimeter may be compromised as a result.

Pocket Manipulation: I wouldn’t consider this to be a strength in the traditional sense of navigating the rush and forcing defenders to miss. He’s shown awareness to climb the ladder or alternatively stand in versus pressure and deliver under duress. He offers urgency in his drop as necessary to get to a throwing position, but his quickness at the top to slide and avoid rushers isn’t going to bake in a lot of missed rushers.

Mobility: Coan is a traditional pocket passer who doesn’t offer a lot of appeal in this regard. He did scamper for some long runs throughout the course of his career (a 25-yard touchdown run vs. Michigan in 2019) but I wouldn’t consider him to be someone with appeal or upside in the running game. He has, however, had success in short-yardage conversions as a QB sneak option.

Mechanics: When he’s in rhythm and working progressions from a clean pocket, he is pretty picturesque. He’s got a clean stroke and I appreciate how he varies his drop tempo to be on time with the top of his drop and his base.