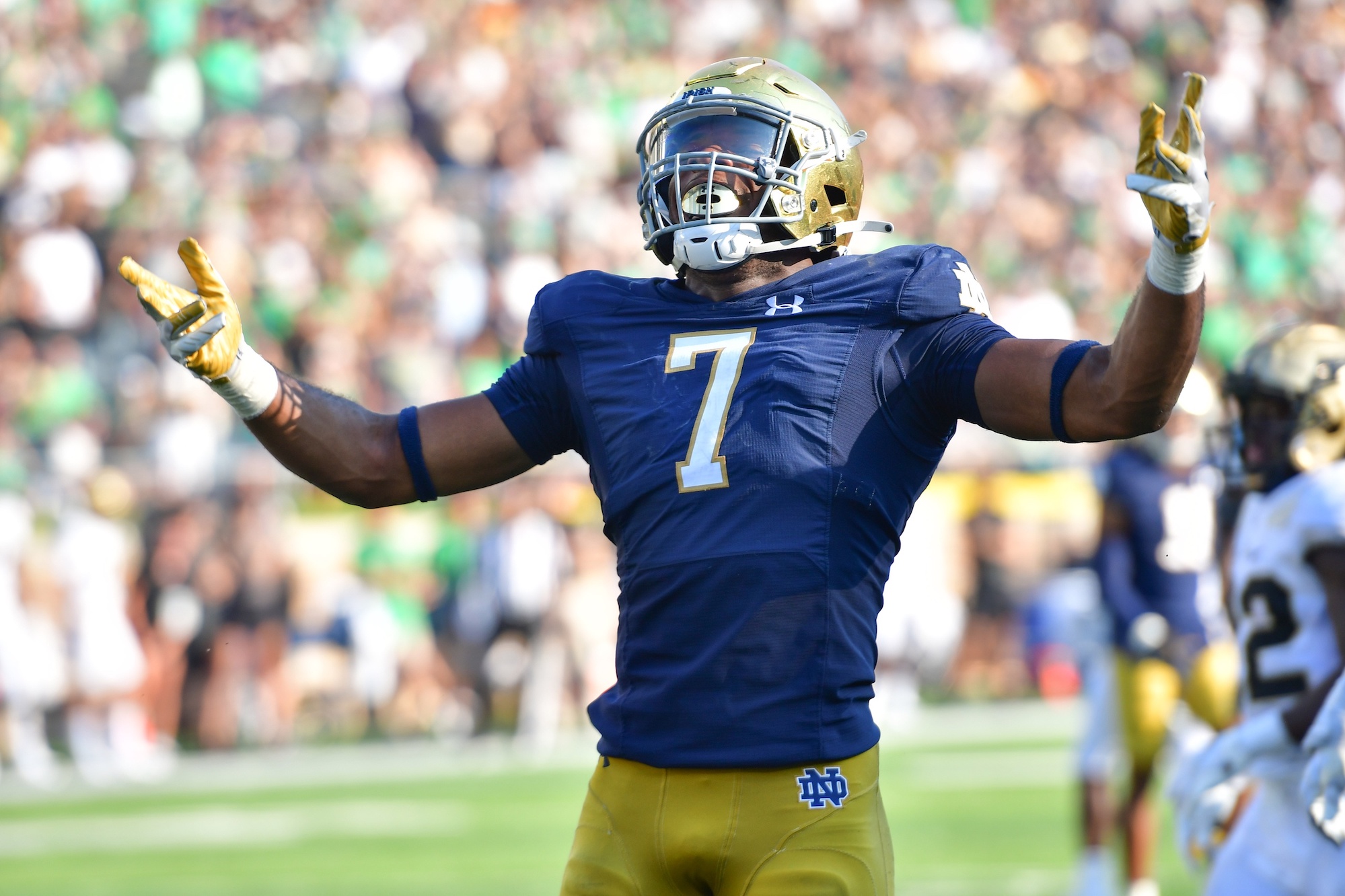 Notre Dame edge defender Isaiah Foskey took a very important series of steps forward as an NFL draft  prospect in 2021, budding as a pass rusher and showing himself to be more than just the dynamic athlete that he served as in his early years as a special teams contributor and a rotational pass rusher on obvious passing downs. With nine sacks in 2021, Foskey took a prominent step toward realizing his potential and became a feared member of the Irish front after several departures from the prior seasons to open up the opportunity to be an every-down player. This was a highly-prized recruit who pulled offers from just about every major program on the scene, including Alabama, Florida, Clemson, Georgia, Ohio State, and many others—when you watch him play it is easy to see why. Foskey has easy athleticism and makes plays look mundane with his ability to trigger, shoot upfield, turn the corner, or surf off the end of the line of scrimmage to crash down and make plays on the backside. With sufficient length and what appears to be a modest amount of room left on his frame to grow, Foskey is someone who should be considered scheme and concept diverse—he can grow into one archetype or stay put and fit another, but the Irish have given him enough roles and responsibilities that the projection appears strong in either case. There are some added layers to Foskey’s game that I’d like to see him unlock but there’s certainly a case to be made that he could do so at the NFL level just as easily as he can with another season in South Bend. Consider Foskey an early speed rusher and someone who has the potential to develop into an impact starter with both his hand in the dirt and as a rush outside LB.

Scheme tendencies: Multiple front scheme with exotic pressure packages to move him around

First Step Explosiveness: The first thing that pops about Foskey is natural physical ability. He’s a dynamic mover in all phases and offers an easy gas pedal to threaten off the edge. The ability to release from a two-point stance and generate a lot of spring is impressive and a testament to his juice as a speed rusher. When walked up on the line of scrimmage, he’s capable of claiming passing down wins simply with his speed.

Flexibility: Foskey is smooth and fluid on the edge to turn the corner with speed and accelerate through his target, showing easy conversion to power to collapse tackles and reduce angles. His fluidity in space shines in both his hip mobility and his dynamic base, which allows him to create sudden change of direction regardless of if he’s scraping or driving forward to crash a gap. I’m just as impressed with his functional cornering to maintain speed when trying to play through or around contact.

Hand Counters: I’m impressed with how effectively he discards blocks on the edge; when he’s afforded natural leverage he shows a good understanding of how to pop hands clear as both a rusher and in the run game. Subtle speed moves allow him to break contact without breaking stride as an outside rusher. I do think he’d be well served to introduce some more power elements and a bigger variety of inside counters to help him be the best version of himself.

Length: He doesn’t appear to play with high levels of extension but he’s got sufficient separation skills and it’s more about how he implements his length that is significant. There are clear, urgent, and effective rips and chops, which pair with his natural athleticism and allow him to cross face or pop free when his gap is tested.

Hand Power: I do wish he more consistently played with pop; I think he wins heavily with speed right now. He’s not physically soft and he absolutely dominates skill players charged with blocking him, but in close quarters combat with tackles, there are times in which he’s getting stuck on blocks from tackles and lacks the knockback to dissuade forward progress. I think he’d benefit from a speed-to-power long-arm rush as well to really add the curveball that would pair with his speed rushes and make tackles a little slower to drive for depth as they respect his speed.

Run Defending: He’s confident with his lateral sheds and shows patience to trust his challenges aren’t prematurely vacating leverage. He gives you some value both in stack backer and edge defender—he has those reps at the college level and I don’t see why you couldn’t get exotic with him at the pro level too based on how patient his reads are. He trusts his athletic ability and it shows. Teams that run directly at him with power and double teams may cause some problems, but if you’re playing him as an OLB, he’ll likely have built-in natural leverage to gather contain and turn this back inside.

Effort (Motor): Terrific pursuit skills and effort in the defensive front. You’ll get special teams reps out of him too if you need him there early in his career. Foskey is relentless in his rally skills and as a backside defender isn’t going to give up a lot of cheap runs out the back door due to lazy collapse.

Football IQ: I’m very impressed with the natural skill set that Foskey illustrates. There are many times in which he’s effortless in his reaction skills and he’s got a nose for big plays in all phases in which he’s implemented. Further development as a player will come down to adding more layers to his physical repertoire, but I do think he’s got the goods—he may just need time if the level of competition changes in tandem with his technical maturation into a more well-rounded player.

Lateral Mobility: Foskey is super fluid in space. He’s effortless when squeezing off the backside and charged with collapsing as an unblocked defender vs. inside zone or zone read. His ability to identify a gap as a looper or when working off the B-level of the defense late in his charge aids his disruption up front when charged with chess piece reps.

Versatility: Versatility is a budding part of Foskey’s game. Beyond his early career special teams reps, Foskey has begun to show more signs of serving in a chess piece role up front—Notre Dame has put him in a stack LB role at times to pressure off the B-level and has made the most of sparing opportunities to turn and run in coverage or otherwise play shallow zones and drop to the flat. He feels like a “do it all” type of defender who has that innate feel for the game and finding splash plays.