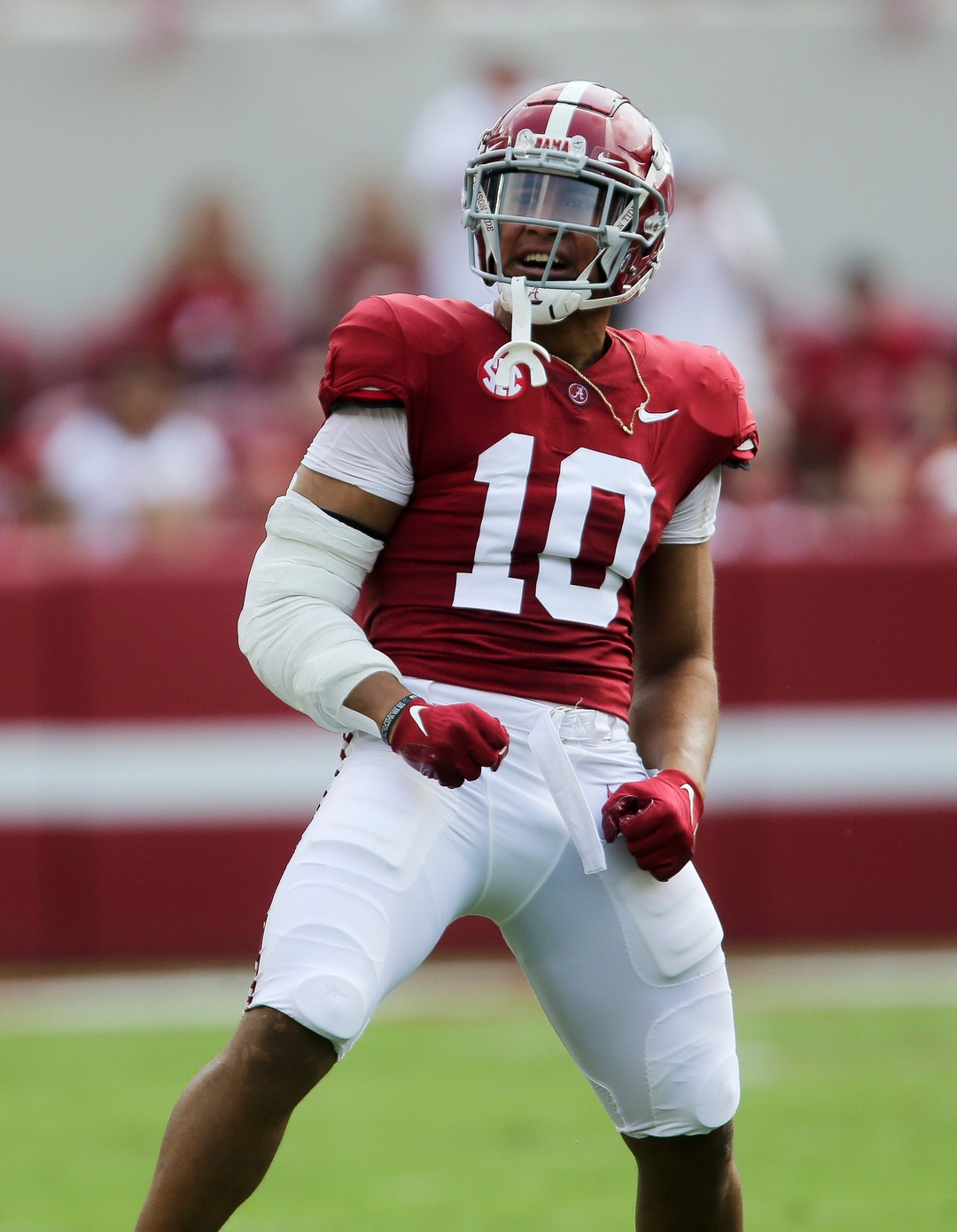 Henry To’o To’o was a former blue-chip top-50 prospect that originally committed and enrolled in the University of Tennessee football program. To’o To’o played in 23 games over a two-year span and led the team in tackles with 76 in the 2020 season. Following turmoil within the University of Tennessee program, To’o To’o transferred to the University of Alabama. To’o To’o was named an immediate starter and quickly became one of the team’s leaders. To’o To’o is a quick-twitch, fast-flowing linebacker that strikes ball-carriers with a physical mentality. To’o To’o’s motor is evident in his ability to track ball-carriers down from sideline to sideline throughout the duration of a game. To’o To’o plays the game with passion and his leadership impacts the entire Alabama defense. This is a versatile defender that has a unique ability to find the ball-carrier. His instincts and athleticism make him a true playmaker at the linebacker position.

Ideal Role: 4-3 WILL linebacker. Can play all three downs as a nickel linebacker.

Scheme Fit: Has the instincts and athleticism to play in all schemes and fronts.

Tackling: To’o To’o is a highly efficient tackler. Uses his speed and athleticism to track ball-carriers down and performs textbook tackles. Uses good body positioning to consistently force ball-carriers to run through his entire frame during the collision. A physical tackler who executes when he gets an opportunity to make a physical play.

Football IQ/Instincts: The high football IQ To’o To’o has is shown in his ability to quickly key and diagnose runs, play downhill, and make tackles close to the line of scrimmage. This IQ allows him to play backside gaps and use his explosiveness to make tackles from the backside of plays. His IQ also allows him to read the QB’s eyes and make key deflections in pass coverage.

Competitive Toughness: To’o To’o is a high-level competitor which is shown before, throughout, and after the play. Consistently makes hustle plays 20-30 yards down the field. The passion that he plays with is infectious throughout the entire defense. His high motor sets the bar for the Alabama defense and he sets the bar high. It is evident that he is the emotional leader of a very talented defense.

Pass Coverage Ability: To’o To’o is a plus-level linebacker in pass coverage and it’s what makes him a complete player. In the Alabama defense, he is asked to cover running backs out of the field and tight ends, which he does at an effective level. His best quality in pass coverage is as a zone coverage defender where he can read the QB’s eyes and uses his instincts and athleticism to make plays on the ball.

Run Defending: To’o To’o plays the run at a high level. Uses his natural instincts and understanding of blocking concepts to beat blockers to a gap in zone concept runs. Also has the functional upper-body strength to take on blockers and quickly shed them to make the tackle. Is consistently working toward the line of scrimmage to stop runs for short gains. Has very little wasted movement in his steps, which is a big reason why he gets to the ball-carrier quickly.

Lateral Mobility: To’o To’o’s lateral mobility is displayed through his ability to make tackles in space. His fluid hips allow him to stay square with defenders while they are making multiple moves in order to evade the tackle. His short-area lateral mobility allows for him to flow down the line of scrimmage while still maintaining a powerful base to deliver powerful blows to ball-carriers when he arrives.

Flexibility: He has great overall flexibility which shows itself through his pad height and leverage. To’o To’o is a consistent knock-back tackler because he is able to keep great pad leverage and strike ball-carriers with good height. His flexibility also allows for him to quickly change direction and redirect on misdirection plays.

Leadership: Unquestionably one of the emotional leaders of a very talented defense. Plays with a high motor and energy. Gives 110% on every play. The fact that he transferred into the Alabama football program in the summer and was named a team leader by the start of the season is a testament to this guy’s leadership skills.

Versatility: Has the athleticism to play all three downs. Can play base WILL linebacker and move inside on nickel packages. His athletic traits allow him to carry slot receivers down the field in man and zone coverage. Overall, his athleticism and versatility will be what attracts NFL teams to him.