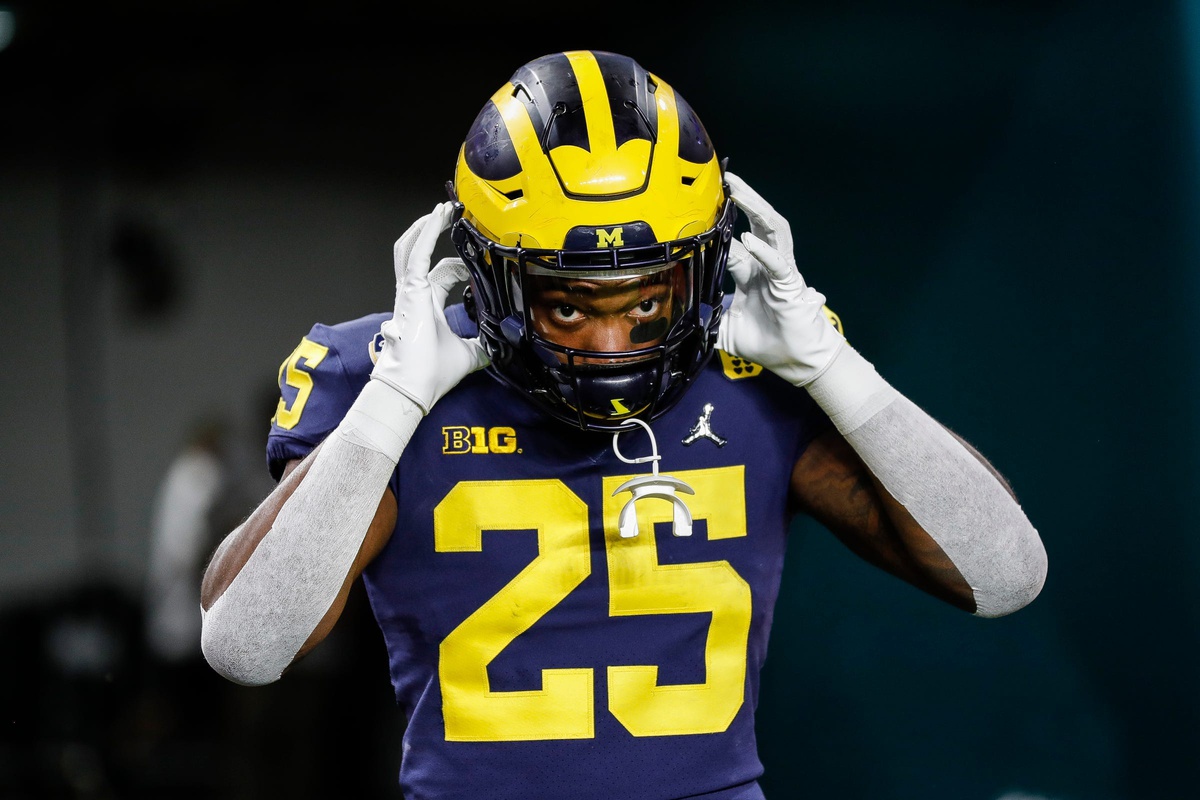 Haskins is definitely one of those backs who you know you can rely on to stay true to the design of the run. That isn’t to say he doesn’t anticipate second-level flow well, but it’s more so meant to be a nod to his patience and discipline when pressing the point of attack. You do see him stringing out second-level defenders and trying to plant and drive to make them pay for over-pursuit. His open-field anticipation is largely effective when attacking north as compared to feeling horizontal pursuit.

He is tough! I love how he challenges tacklers in the pile but then he’ll parlay his momentum off of that and gain ground or get skinny to slip through the point of attack. He’s densely built, and as a result, has success as a bruiser.

He, as of the Big Ten Championship Game, holds the longest streak in college football for carries without a single fumble with more than 440. He’s firm with the football and cognitive to his five points of contact to sustain a firm grasp on the ball.

Michigan RB Hassan Haskins has enjoyed a career resurgence in his fourth season in Ann Arbor. As part of a two-headed rushing attack with Blake Corum, Haskins has provided the thunder in the Wolverines backfield en route to rumbling for nearly 1,300 yards on the ground with 20 scores heading into the CFP. These figures are double what Haskins had been able to post in his first three seasons combined and offer an exciting look into what he can potentially be as a ball-carrier. A stout running back who will tip the scales around 220 pounds on gameday, Haskins has a physical, grinding approach to his carries and wears down opposing defenses, as best evidenced by his monster performance against the Ohio State Buckeyes in Michigan’s big win to help propel them to the CFP. But what makes Haskins interesting is that he isn’t just a jackhammer runner. He’s got a fair level of juice in the open field to run away from tacklers and break pursuit angles in the process, giving him some dynamic upside.

He’s an accomplished athlete. He was a basketball standout in high school and finished second in the high jump in the state championships in track. On the gridiron alone, Haskins has journeyed to the defensive side of the football and back, committing to convert to defense during his redshirt freshman season before being pulled back to play running back in 2019 based on team need. With a significant role in pass protection on his resume as well, at the very least you know he could handle a number of roles for you early on.

Scheme tendencies: Gap/power running game with a high volume of carries between the tackles.

Footwork: There’s good cadence to his steps, but Haskins hasn’t really struck me as a creator in the backfield when the point of attack is stuffed up. His foot fire isn’t at a rate that allows for sudden adjustments and re-acceleration. I have seen some hard jump-cuts out of him that has allowed him to parlay his press of the line into a hard attack upfield.

Durability: Michigan really rode him down the stretch—27 carries against Indiana, 31 against Penn State, 20 against Maryland, and 28 against Ohio State in the final four games of the regular season. In total, he had nearly 250 carries over Michigan’s 12-game regular-season schedule. Given his light workload up until 2021, you have to be encouraged by his lack of wear and tear combined with his strong showcase as a high-volume player in 2021.

Explosiveness: I certainly wouldn’t consider him to be a dynamic player, but he is a powerful one who can punish tacklers in one-on-one situations and has just enough bounce and spring to make you wrong if you don’t bring integrity into your tackle challenges or your fits in a gap.

Versatility: I don’t see any reason why he can’t be a winner in any rushing concept that features downhill running, but I wouldn’t run him in wide/outside zone or ask him to consistently get the edge on outside concepts—I don’t see that kind of juice. I don’t think he’s a true three-down player either, but he can have value on short-yardage runs and as a high-volume runner.

Elusiveness: Just when you’re ready to pin him as a runner who doesn’t have a ton of creativity he ends up hurdling over someone. He’s not overly loose as a runner and he’s not going to freeze tacklers with short steps and suddenness, but he has just enough ways to make you miss that he’s capable of being a challenge if he gets the edge and turns upfield in space.

Passing Down Skills: There’s a mixed bag of upside here to work with. I wish he showed more value in the passing game as a pass-catcher, but instead his targets are modest and his production has been nearly nonexistent as Michigan has looked to work in better targets when they’re looking to release backs out into space. He’s well versed in pass protection and has the frame to bang with linebackers and he’s shown active eyes to scan for threats. He offers stiff pads when catching rushers flush, too.

Discipline: I appreciate the balanced approach he brings to running. He’s quick to fall in line behind his pullers and lead blockers and is willing to allow blocks to develop before redirecting and accelerating back into space. There’s been good return on investment in short-yardage situations as well to simply duck into the pile and churn his legs.