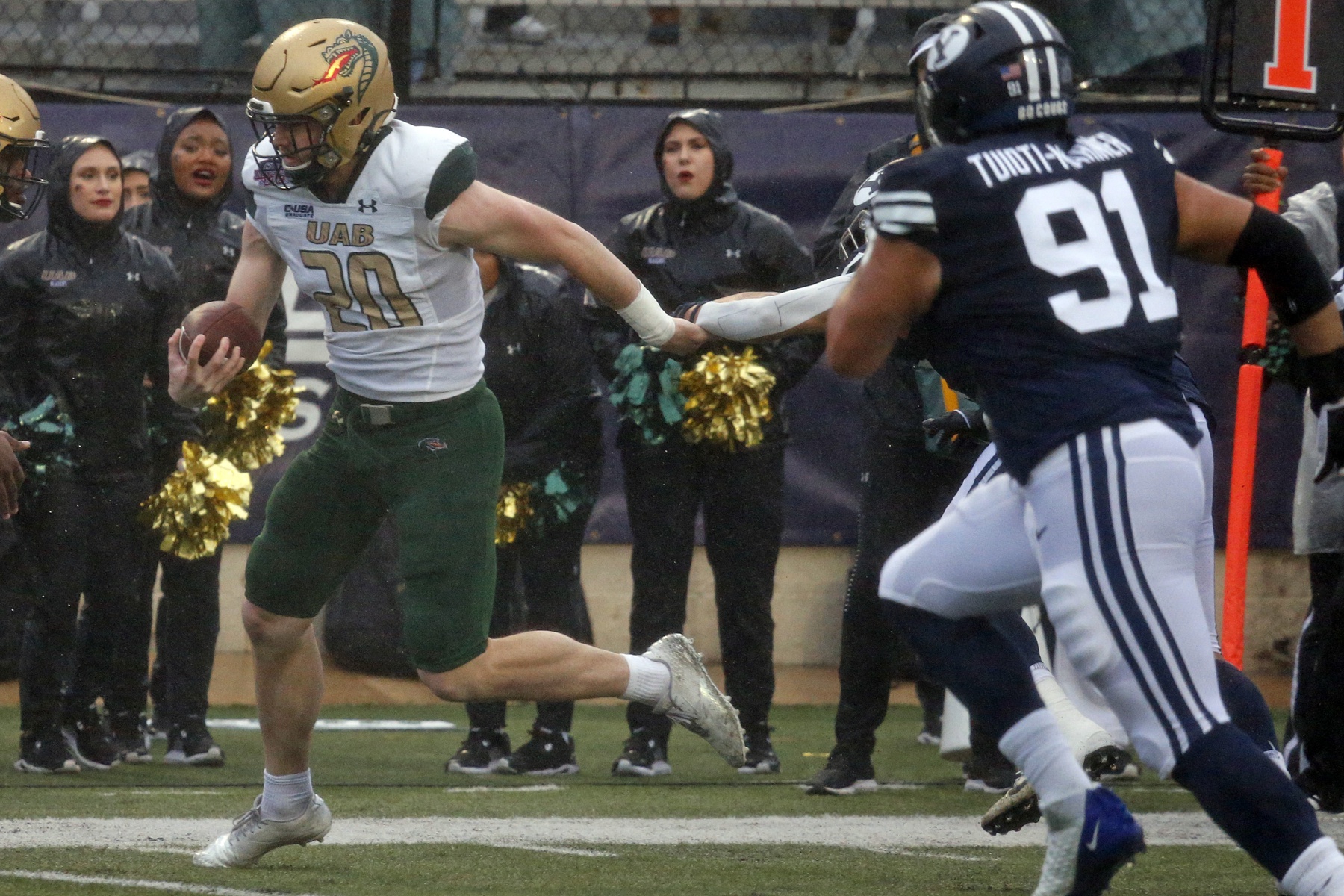 Prince has great upside in providing big plays. Throughout his career, Prince has shown that he has good speed and acceleration to run away from defenders who are trying to cover him vertically. He also has the ability to catch short passes and accelerate to take them for big gains.

I believe that Price has really good ball skills. He has a natural ability to track balls in the deeper portion of the field and effortlessly secure the pass. He also shows the ability to stay focused in contested-catch situations and bring down the pass in traffic.

Prince shows to be a versatile TE. He aligns in multiple positions and is a receiving threat at every position. He has the savviness as a route-runner to uncover for underneath routes and the speed to be a vertical threat.

Gerrit Prince came to UAB by way of junior college. Prince was originally a wide receiver and made the conversion to tight end. This decision has proved to be a good one. Watching Prince’s film, you can see his receiver background in his ability to simply run away from defenders. He showcases speed to accelerate and separate from defenders when running vertically. Price also shows that he is an efficient route-runner from the tight end position. In the NFL game where tight ends have been more heavily utilized as receiving options, Prince has a ton of value. Prince will instantly provide a team with a vertical presence at the tight end position and can serve as a security option for a quarterback in the middle of the field.

Hands: Prince looks to have good hands. At UAB, he was asked to run short, intermediate, and deep routes, which put him at different angles catching the ball and he secured passes well at all three levels. I didn’t notice him having to double-catch passes, and he was comfortable catching the ball away from his body.

Route Running: At UAB, Prince was asked to both short and deep routes. On short routes, he makes an effort to sink his hips in and out of breaks to get separation from defenders and he is effective. On deep routes, Prince can use his acceleration to separate from defenders and uncover in the deeper portions of the field.

Competitive Toughness: Although Prince has a slender build, he is a tough competitor as a blocker. When aligned at the in-line TE position, he works hard to block his responsibility. He is effective when they put him in motion and insert him as a lead blocker on run plays.

Blocking Skills: When Prince is put as a blocker, he gives good effort but should not be relied on to make key blocks to spring a runner for a big gain. Prince’s overall lack of functional strength shows in his inability to get movement at the point of attack. At the snap, Prince will come out of his stance but gets very little movement on the line of scrimmage

Football IQ: At UAB, Pince was asked to align in multiple positions and this shows his in-depth understanding of the offense. Prince rarely misses his responsibility blocking. When running routes, Prince understands defenses and shows that he can uncover against both man and zone.

RAC Ability: After securing the pass, Price instantly looks to get vertical. He is a linear runner and looks to use his speed to separate from defenders. Prince does not have great overall mass so he doesn’t produce the number of broken tackles you would expect a TE to, but his speed more than makes up for that