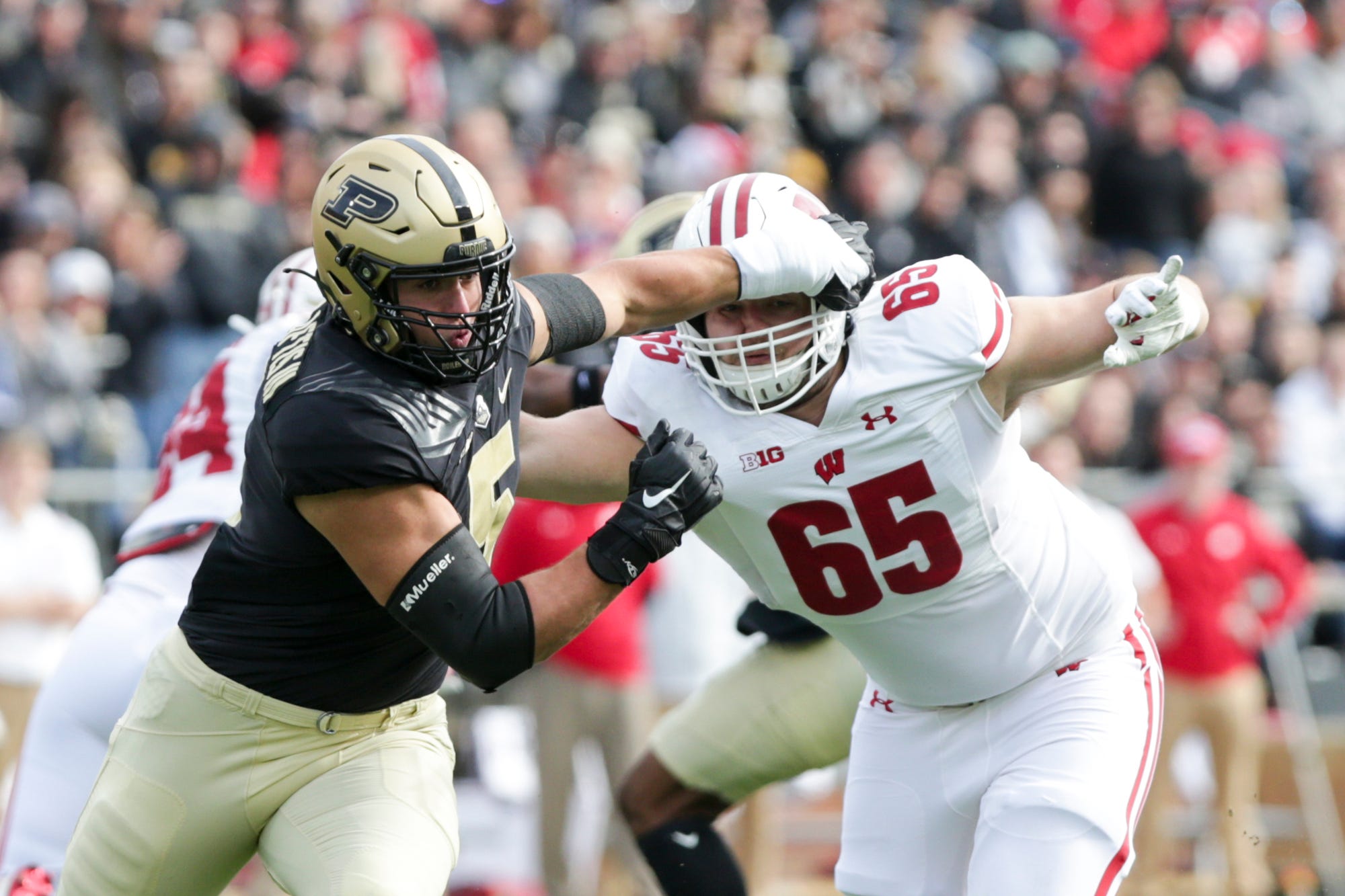 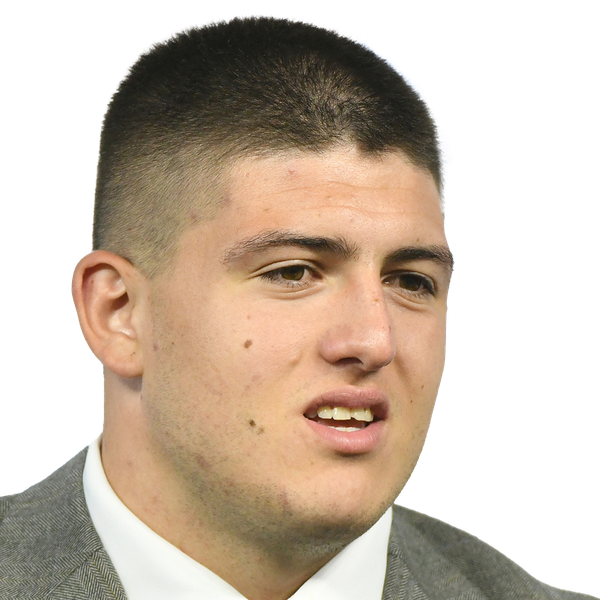 The short windup that Karlaftis is afforded due to a lack of ideal length is actually a benefit here; he creates massive amounts of force in a short time in order to stun and overwhelm blockers. Don’t leave him on skill players in pass protection—he ate TEs and RBs alive and his long arm speed to power conversion claimed victims against many comers this past season, including against Notre Dame and the big upset win over then No. 2 Iowa. There’s redeeming value here to help offer confidence amid an untraditional build.

He's got a bunch of clubs in the bag.

How many moves does Karlaftis have? How much time you got? I love the versatility he brings in this regard. He’ll win with all of your traditional moves, some of which are more successful than others. I do think he’s a little spin happy at times and doesn’t always have the crease needed to work into space and gain ground after using it. But his power conversion and bull rush are excellent and his jab does a lot of the work for him; given the power his hands provide and the respect they command, he’ll hit or sweep a punch away with good timing as he flashes the inside arm.

Hope you're ready for a 12-round fight.

Tireless. This is the best trait that Karlaftis offers and as you watch him play you gain appreciation for a motor that never shuts off. He’s constantly firing through counters or ripping over a skill player attempting to chip. Hustle plays are a hallmark of his film and he’s an absolute mauler in close quarters if he decides he can bull you.

Purdue EDGE defender George Karlaftis might be the best power rusher in this year’s class. This is a prospect who exploded onto the scene during a breakout 2019 freshman season and has since pieced together another tremendous campaign for the Boilermakers in 2021. I’m most impressed with Karlaftis’ motor and close quarters combat. He does not appear to play with the ideal length and separation skills as an edge defender, but he’s become quite refined as a puncher and with his shedding techniques to help enable him to win ground and get good “knockback” at the point of attack.

Karlaftis moved to the United States at the age of 13 from Greece and was a high school stand out in both football and track & field, earning back-to-back state titles in Indiana for the shot put (60 feet, 0.5 inches as a junior) along with endless football accolades. Upon arriving with Purdue, Karlaftis quickly made an impact and was named a first-team Freshman All-American in 2019. His development as a player has seen him complement the urgency he plays with and raw power with more nuanced counters, precision striking, and a strong sense and feel for running the arc with speed.

I get the sense that Karlaftis isn’t quite the same reactive athlete as some of his contemporaries in this year’s class, but he’s become quite the technician at the position and offers an impressive nose for rushing the passer. Karlaftis has rushed the passer from both two and three-point stances and gets strong release from his tilted two-point stance when he’s aligned at wider angles. Amid the debate about the value of speed and flexibility versus power on the edge, Karlaftis is going to be a testament to the latter. He wins many reps with his ability to roll blockers back on their heels and reducing the angles that he needs to work with in order to disrupt timing and comfort in the backfield before transitioning to the football. But don’t think he can’t claim outside wins, too. He’s fully capable of dipping the outside track or hitting an inside swim maneuver. He may not have the best pitches in his arsenal as a pass rusher out of this year’s class, but he might have the most.

First Step Explosiveness: There is very, very good get-off here at the line of scrimmage. When Karlaftis is committed to triggering and attacking up the field, he’ll be on top of pass sets before tackles know what hit them—from there he’s got a slew of attacks. His initial spring is good and his second and third steps are very dynamic to build power or, alternatively, accelerate with a hard redirection step on a shallow angle to potentially set him up to work back inside.

Flexibility: You watch him play and you don’t expect to see him get through some of the creases that he does. Karlaftis is slippery in this regard and slides through chips, double teams, and framed blocks well. He’s got some natural leverage with his build, too, allowing for a low center of gravity and an effective edge track as he builds pace through his first few steps. The rush counters he displays are accentuated by a high degree of body control to get skinny or disassociate his hips and torso and still play with strength.

Length: I don’t see a lot of separation in a lot of Karlaftis’ reps and I’m not confident he’s going to measure with a lot of anatomical length either. That’s certainly going to be a roadblock for some and makes his projection more murky than some of his contemporaries, especially since it does show at times. In instances where his punch power doesn’t win him control early, he can get sucked into the vacuum and disappear or get enveloped and washed out. It’s likely a big reason he’s become the nuanced technician that he has. But the lack of appeal here likely creates long-term barriers to opening more kinds of roles for him, particularly working as an interior alignment POA defender.

Run Defending: Karlaftis is an effective penetration/slasher defender and his ability to create push when playing around or through bodies bodes well for him continuing to create disruption at the NFL level. He has missed some finishes on account of only modest length/tackle radius and lateral redirection skills, which does give me some pause. But his ability to dictate terms and play on the plus side of the line of scrimmage seems more likely to aggregate more good than harm and you’re going to be more than willing to live with disrupted plays that aren’t finished if they come at the same rate as they did at Purdue; particularly because he’s not going to miss them all.

Football IQ: I’m super impressed with Karlaftis’ acumen as a rusher. He appears to have a strong sense of reading weight distribution and body language of his blockers, allowing him to pick the right kind of attack coming out of the blocks for optimal disruption. He’s got a natural sense for feeling peel-back opportunities and his hand utilization is at the top of the charts for discarding bodies in traffic and continuing in pursuit.

Lateral Mobility: I do wish his reactive quickness when needing to react late to ball flow was a little more dynamic—this is a divider for me between him and the top pass rushers in this year’s class in Hutchinson and Thibodeaux. When Karlaftis needs to drive and redirect, he’ll often overrun the target and gear down late, allowing the ball to escape his grasp and potentially break contain. Edge contain will need to be something he’s committed to because when he decides he’s coming or attacking, he doesn’t gear down easily.

Versatility: His frame appears to be fairly maxed out so I’m not sure you’ll have a chance to stack on the weight to get him into that 285/290 range and potentially open up a world of more consistent reps in the B-gap, but for a 275-pound guy, Karlaftis is quite effective on the edge and I’d like him plenty as either a standup rusher or as a hand in the dirt option. Shows great variance in his rush attacks to play with speed or power.