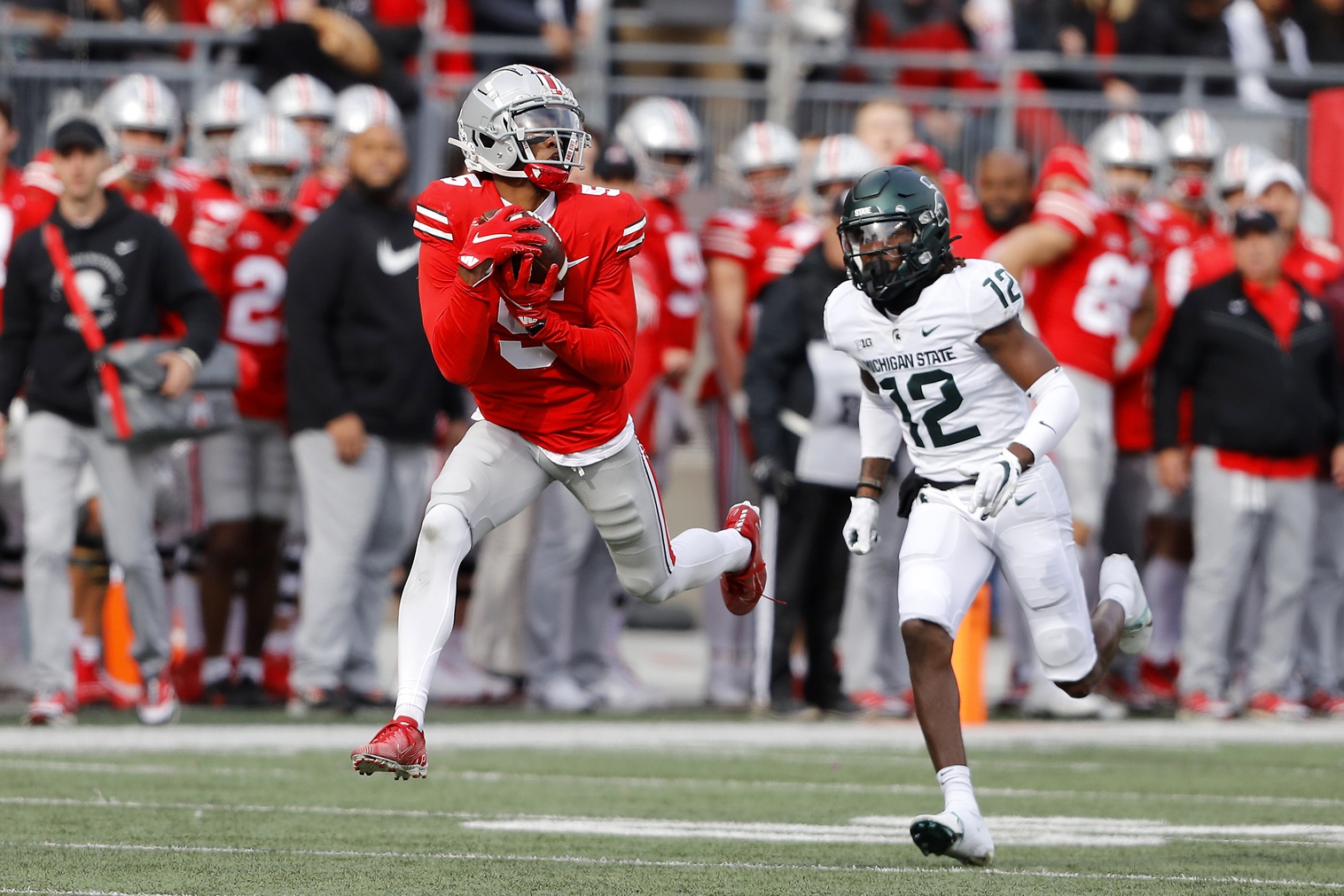 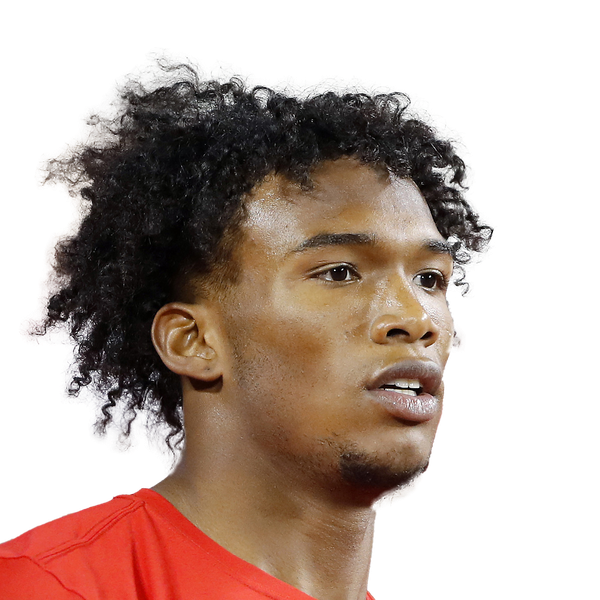 Get your popcorn ready if you like explosive short area change of direction!

It is easy to be impressed with the snap Wilson showcases on the route step when he’s charged with working back down to the LOS and converting his vertical push on comeback routes. He does showcase a high-level amount of burst at the top of his rounded breaks, too—on-time throws against soft coverage (which he’s seen a lot of in college) should be routine pitch and catch opportunities. He’s comfortable working in traffic and across the middle of the field, but Wilson often gets his looks on quick throws on the perimeter and isn’t a consistent threat in the vertical game as a downfield target despite a strong 40-time at the NFL Combine

If you play him soft in coverage, Wilson is going to tear you apart.

Wilson’s work when provided a cushion at the snap is excellent. He’s a frantic and chaotic runner who does well to sell false breaks and keep defenders in space on their heels before driving and using that initial pop to run away from leverage and into space. On the perimeter, particularly when facing press coverage, Wilson’s ability to stack quickly is hit or miss and will contribute to some quiet stretches in play. This is a big reason why I favor a slot projection and role for Wilson in the NFL.

Wilson can strike like lightning after the catch. Give him a crease and he'll make you pay.

Wilson is capable of taking quick touches the distance in the right environment. He’s not a consistent downfield home-run hitter, but getting him isolated in space with a single defender, either in the screen game or as a late-developing underneath option, can create great amounts of return on investment for low-risk touches.

Ohio State wide receiver Garrett Wilson is a dynamic threat with the ball in his hands and offers the kind of run after catch ability that is sure to command a role at the NFL level. Wilson, who is a part of the crowded wide receiver room in Columbus and has enjoyed a career year in 2021, projects best to the NFL game as a slot receiver, where his short-area agility will afford him more room to work and create space and he can be more naturally crafted quick touches for an offense that commands spacing issues with a prominent vertical passing attack.

Those conditions parallel what Wilson often works with at Ohio State and would help to both maximize his immediate impact and allow the same creative touches he sees in college to follow him to the pros. I appreciate Wilson’s versatility as an offensive weapon and would hope to see him placed into a role that features him in the RPO game as a bubble/glance threat, as a jet motion option to get him leverage to the perimeter quickly, and as an underneath receiver that utilizes his burst to carry across the middle of the field in mesh/drive concepts as the underneath target.

Hands: Wilson’s game is littered with some frustrating concentration drops that feel easily avoidable and will need to be addressed if Wilson is going to maximize his opportunities. Eye discipline to see the ball into his hands needs to be better, but when he is committed to extending and catching out in traffic, he’s capable of plucky catches and has some tremendous hands-catches on back-shoulder throws on his resume. His hand strength to squeeze in contested situations is only sufficient, however.

Release Package: Wilson showcases high-level short-area quickness and foot fire, which allows him to quickly push free and release cleanly if he’s charged with working away from press leverage. Forcing false steps and manipulating the base of corners in press is consistent with his game, but showing the functional strength to play through lateral contact in press isn’t as persistent as you’d like it to be. Transitioning to stack DBs working to clear and open his strides, particularly on the outside, continues to be a work in progress.

Run After Catch: Good luck corralling him in short spaces if you’re the first arriving defender. This is comfortably Wilson’s best trait and allows him to stress tacklers in one-on-one situations effectively. The open-field speed Wilson shows if he’s catching throws in stride are capable of breaking pursuit angles, too—although his long speed in long-distance footraces lacks the same pop that his initial acceleration in the first 10 yards does. He has good contact balance to parlay off of contact and adjust to further gain ground.

Ball Skills: Wilson showcases effective body adjustments at the catch point to open himself back to the football and ensure he’s properly square to the ball when afforded opportunities further downfield. I do think that Wilson has shown notable and important improvement in this phase in 2021, with impressive catches on the back shoulder, on throws placed low and away from his momentum, and on fade routes in the red zone (Purdue, 2021). But his ability to elevate above the rim and win through contact isn’t where you’re going to see Wilson shine at the pro level.

Football IQ: Wilson is a savvy talent with the football and shows very good open-field instincts. Field vision to identify angles and defeat them with speed or wiggle is a great asset to his game. There are instances where I do think Wilson, particularly in vertical opportunities, gets squeezed too often and compromised throwing windows, but he’s much more effective in the MOF where he can press his stem away from the break and then work back underneath soft coverage.

Versatility: I’m not overly confident in a perimeter role for Wilson in the NFL, but this is a player who will not be short of opportunities to touch the football. Creative play-callers will love brewing up a package of plays for him in addition to traditional routes, and Wilson also has been a persistent option in the punt return game during the course of his time at Ohio State. Not sure you’ll love his results in a vertical offense as an option with a deep ADoT, but being the counterpunch to said receiver (which Chris Olave was at Ohio State) will put him in the best position to find success.

Competitive Toughness: Wilson showcases admirable competitive toughness with the ball in his hands, and his opportunities to drive down into the box and seal on safeties and nickel defenders have often helped to supplement the Buckeyes’ ground game and spring big runs on the perimeter. You do wish there was equal urgency to all of his releases and routes, although that may be a coaching point. He shows visible energy and enthusiasm for successful reps from teammates and he plays with a good level of scrap; likes to chat up opponents at the whistle.