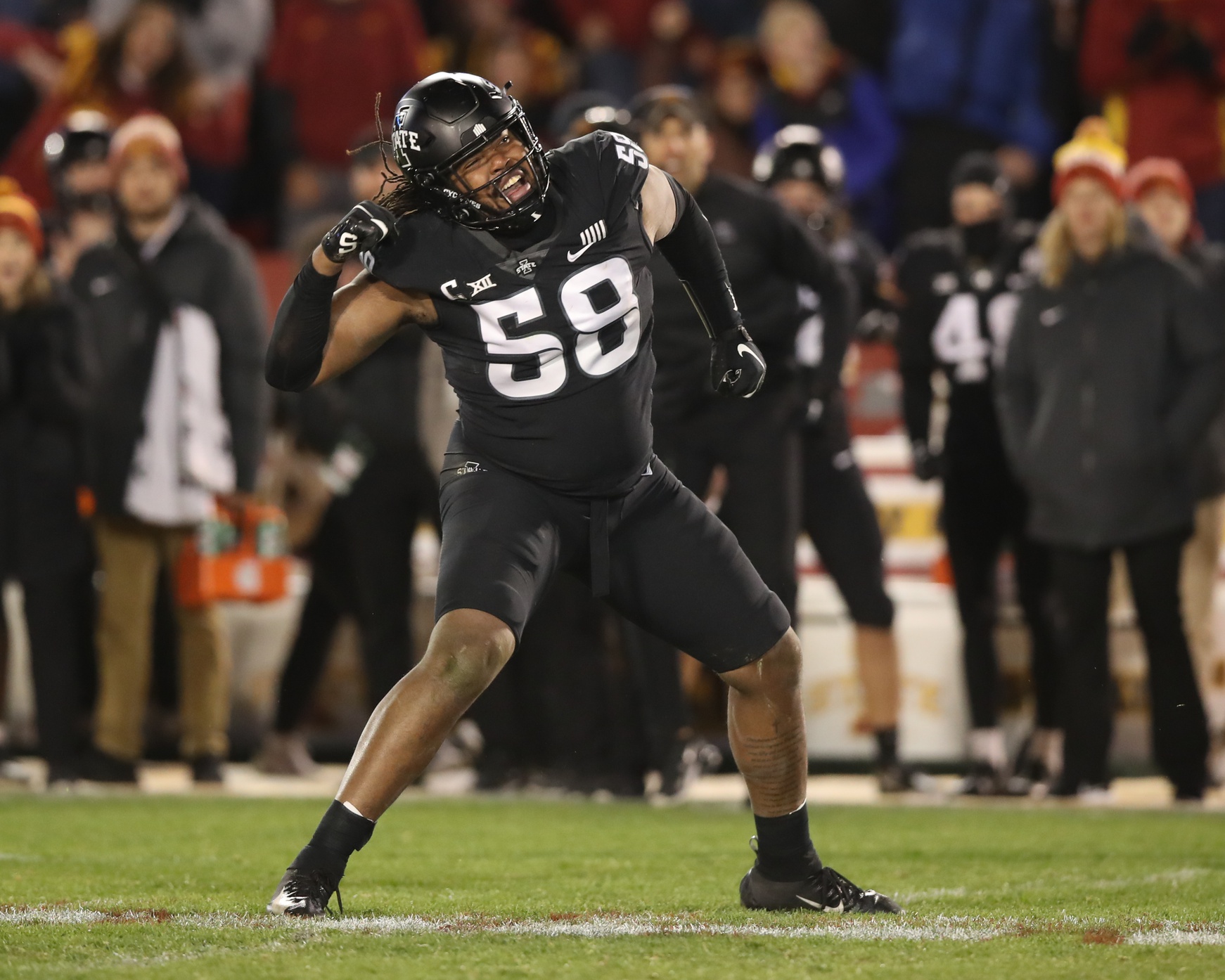 He has a good presence and overall knowledge of the offensive line. He can diagnose run blocks and understand what leverage offensive linemen are trying to get on him.

Eyioma Uwazurike is a former 3-star recruit from the state of Michigan. Uwazurike was a part of the 2016 recruiting class, so that makes him one of the older prospects in this draft. Early on in his career at Iowa State, Uwazurike saw little playing time and was used primarily as a reserve. The 2020 season was the first season where Uwazurike was named the starter for the entire season. Going into the 2021 season, Uwazurike was primed for a big year and he had one. He was named First-Team All-Big-12 and recorded nine sacks, proving to be Uwazurike’s most productive season by far. As a prospect Uwazurike is a big, powerful defensive lineman that can generate movement. He is best when he has a predetermined stunt or slant called and he can use his quickness to shoot gaps. Early on, Uwazurike can contribute as a player who disrupts the run.

First Step Explosiveness: This player possesses a quick first step, he is just inconsistent in his usage of it. When he times the snap right, he can get good penetration and displace offensive linemen into the backfield. But when he is late, he doesn’t have a presence and is often a nonfactor on plays.

Flexibility: Uwazurike has flexibility issues that affect his overall athleticism. Uwazurike shows lower-body stiffness that affects his ability to play with good leverage. Oftentimes, Uwazurike plays highs and allows offensive linemen to get under his pads and move him off the ball because they have better leverage than him.

Hand Counters: Uwazurike has to improve vastly in this department to become successful on the next level. He has very long arm movement that offensive linemen are easily able to predict. He tries an arm-over maneuver, but he exposes his ribs and often takes shots there that slow his ability to get upfield. He needs to improve on the overall quickness and usage when he is in hand combat.

Hand Power: His hands have very little impact on offensive linemen. When he decided to shoot his hands into the chest plate of offensive linemen, it didn’t create any movement. His lack of hand usage also showed in his ability to disengage, as he didn’t seem to have the hand strength to firmly grab offensive linemen and shed them in a quick manner.

Run Defending: This player has an unorthodox approach to his run-stopping technique. He relies on using his frame to thrust into the offensive lineman then takes steps backward to create separation and get arm extension. This allows him to get the space he needs to find the ball-carrier and disengage when he needs to.

Effort/Motor: Uwazurike has a solid overall motor. He is willing to chase the ball-carrier down the field and chase plays backside. At times, Uwazurike is rotated out of the game, which could be an indicator of his need to improve his overall conditioning.

Lateral Mobility: Moving laterally is not his strong suit and at times he struggles. He has lower-body stiffness that prevents him from stretching out zone runs and keeping his integrity. He also struggles to redirect in the open field to adjust to ball-carriers changing direction. He is a one-flow player.

Core Functional/Strength: This is a trait in Uwazurike’s game that can use improvement. When playing the run, he is inconsistent in his effectiveness due to what looks like a lack of overall strength. The lack of strength in his core shows when he is battling in the trenches and Uwazurike ends up on the ground due to his inability to torque his body and stay in a position of strength.

Versatility: Uwazurike has versatility in the fact that I believe he can play in both a 4-3 or 3-4 scheme. With that being said, he would only be considered as a defensive lineman. He has limited athleticism that would prevent him from being effective on the edge.