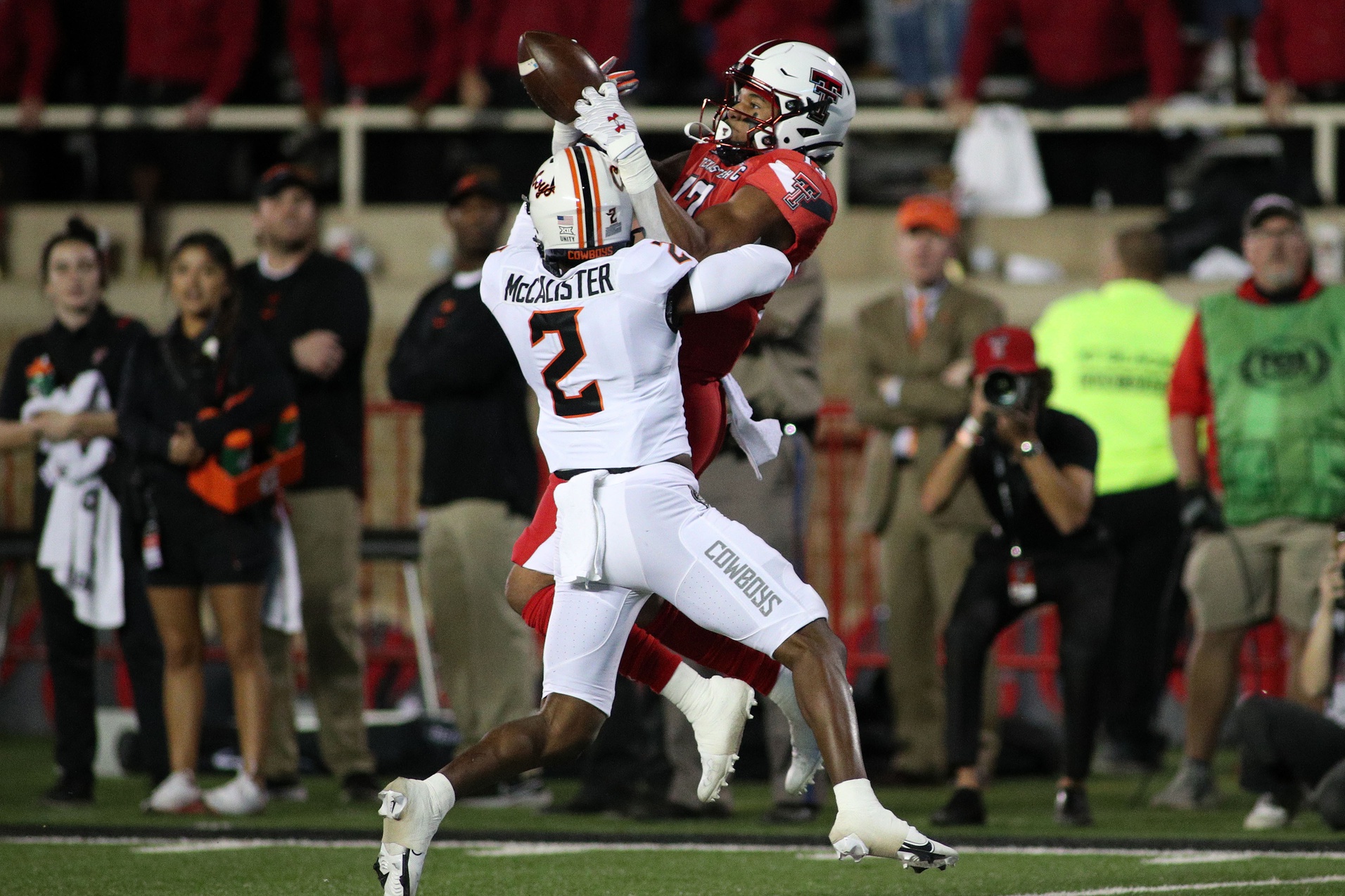 Ezukanma’s big-play ability comes in his ability to catch contested passes down the field. Ezukanma looks to have limited down-the-field speed which prevents him from running away from defenders. This player has traits that lend themselves to him being considered more of a possession receiver rather than a big-play receiver.

Ezukanma’s competitive toughness shows itself through his willingness to block. On running plays, Ezukanma gives effort to block the defender he is responsible for. He also is a player that will hustle down the field to throw a key block for teammates.

This player displays his best ball skills in contested-catch situations. Ezukanma does a great job of locating the ball in the air and focusing through the contact of defenders to catch the ball. He also has a great understanding of the tempo of back-shoulder throws. He is able to properly time the throw and thrust his body backward to secure the catch.

Erik Ezukanma exploded onto the scene during the 2020 season where he was one of the most productive receivers in the Big 12. Ezukanma continued this production into the 2021 season where he was able to catch 40 passes for more than 700 yards. At Texas Tech, Ezukanma aligns primarily in the slot where he quickly gets open to make himself available for the quarterback. He uses his wide catch radius to make difficult catches and allows for the quarterback to just throw 50/50 balls his way. Ezukanma also showed that he can be a good red zone target, displaying the ability to go up and over smaller defenders to haul in passes for touchdowns. In the NFL, Ezukanma will be best served as a possession receiver that can work the middle of the field.

Ideal Role: A big possession receiver that can line up in the slot and work the middle of the field and red zone target

Route Running: When defenders are playing off coverage, Ezukanma shows a burst off the line of scrimmage to threaten defenders vertically then snaps off routes to run an underneath route. At the top of routes, Ezukanma rounds off his in-breaking and out-breaking routes, which gives the defenders time to make up the distance and get back in phase with him. At times, Ezukanma lacks urgency in his route-running and it affects the quarterback’s ability to get him the ball. Ezukanma has shown to have a limited route tree and is at his very best when defenders play off coverage.

Hands: Ezukanma has impressive hands and has shown to have great confidence in being able to secure passes. He is able to simply pluck the ball out of the air and secure the catch on instant impact. He also has the natural instincts to properly adjust his hands to the trajectory of the ball.

Separation: At the top of his routes, Ezuknama is able to use his quickness to get separation on in-breaking routes. On these routes, Ezukanma is able to sell an outside route to the defender then snap off the route to the inside to make himself available for the quarterback. While Ezuknama is a sufficient player at getting separation on in-breaking routes, he struggles to separate on vertical routes.

Release Package: When Ezukanma has his choice of releases, he’d rather use quick feet to pause the defender followed by a quick hand swipe to free him of defenders so he can get into his route. In press, Ezukanma has a limited release package that is highlighted by his lack of strength. When defenders play press, they are able to get into his chest plate and fully take away his ability to get an inside release, forcing him to have to go outside and oftentimes completely disrupting his timing and routes.

Run After Catch: Ezukanma is a linear athlete that doesn’t possess many lateral moves in the open field. After securing the pass, Ezukanma immediately gets vertical to pick up extra yardage. Ezukanma has a big frame that he uses to glide through casual arm tackles to pick up yards after the catch.

Football IQ: Ezukanma showcases his natural instincts as a receiver when the ball is in the air. He is quickly able to locate passes and put himself in a position to secure the pass. Ezukanma has a knack for coming down with contested passes, making him a candidate to evolve into a red zone receiving threat.

Versatility: This player’s height and length combined with his overall athleticism make him a versatile receiving option for quarterbacks. Ezukanma’s natural ability to catch contested passes can be utilized to work the middle of the field and high-traffic areas, and his athleticism allows him to become a vertical threat on the perimeter for offenses.