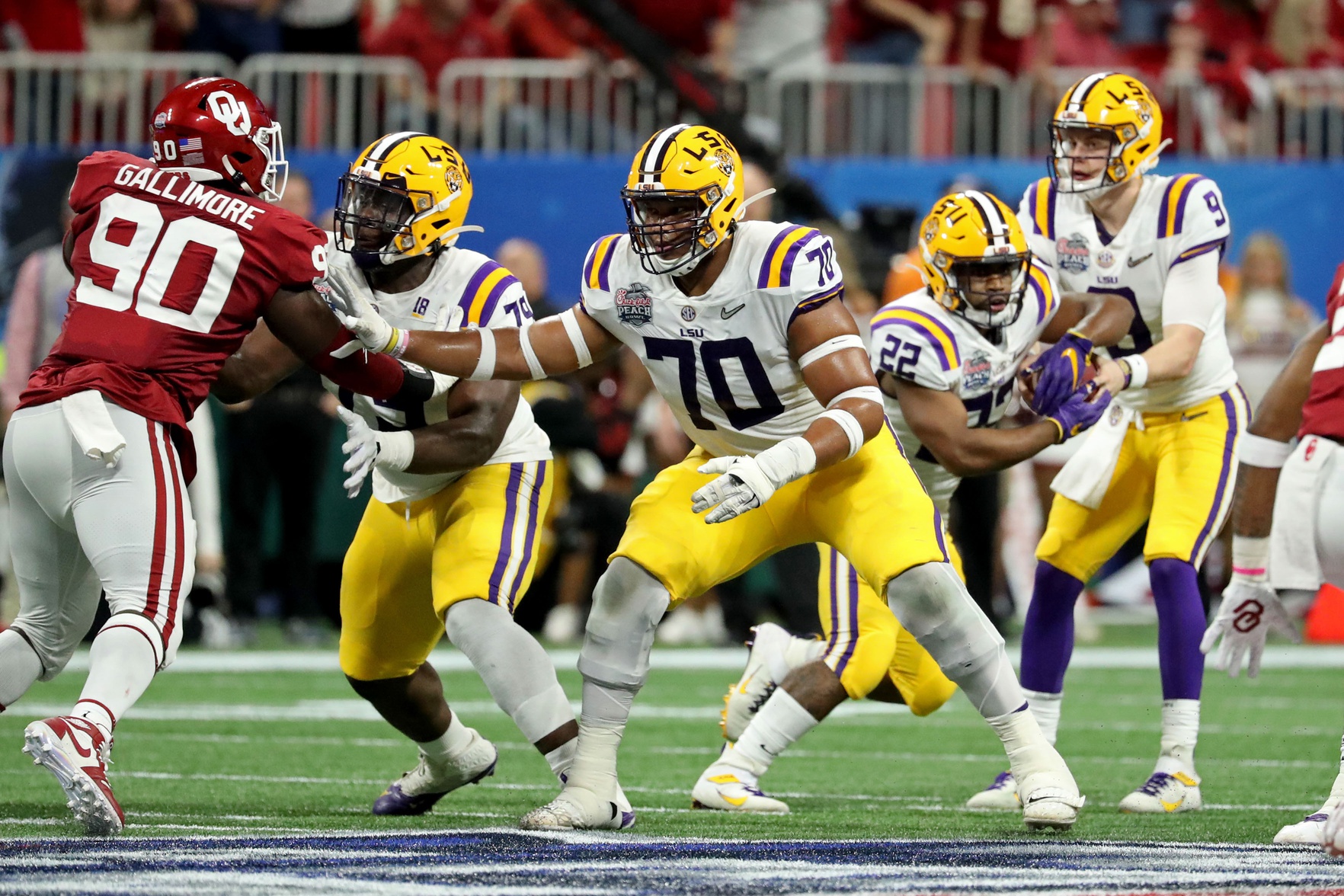 Has played on both sides of the center.

Ingram has experience at LSU playing both LG and RG, which is a testament to his football IQ. Consistently was able to identify stunts and pick them up successfully. As a pulling guard, he was able to correctly identify the correct defender to block. Seen multiple different fronts by defenses in college and seemed to rarely miss on picking up the right defender.

Ingram’s quick first step allows him to generate good power at the snap and be able to move defenders off the line of scrimmage. When he is working a double with a teammate they usually dominate the point of attack and are successfully able to work to the second level. When he is single-blocking a defensive lineman, he comes off the ball with good leverage that allows him to generate movement on the defender.

Ingram has a thick, strong base that allows him to properly anchor against defenders who are attempting to bull rush. Can move his feet to mirror defenders and stay in front of them. Can also anchor on unexpected blitzers showing great reactionary power in his lower half to gather himself and hold the point.

Ed Ingram is a redshirt senior that has been a part of LSU Football since the 2017 season. Ingram saw his first action as a true freshman, playing in all 13 games. Ingram sat out the 2018 season due to off-the-field issues that were resolved at the beginning of the 2019 season and he has been a starter ever since.

Ingram is a versatile offensive lineman that played both LG and RG during his career at LSU. Ingram is a strong, powerful run blocker that can move defensive linemen off the line of scrimmage. He has the athleticism to become an effective pulling guard in power run schemes. He can also work to the second level in a controlled manner to effectively block second-level defenders. Has a high-level football IQ in his pass sets that allows him to correctly pick up stunts and blitzing second-level defenders. Ingram is a multi-talented offensive lineman that has all of the athletic traits to become an immediate starter in the NFL.

Ideal Role: Can play either guard position and give quality snaps as a tackle.

Scheme Fit: This player is scheme versatile. Has athleticism and the strength to play in multiple schemes.

Competitive Toughness: Ingram has exceptional competitive toughness as displayed by his willingness to finish blocks. Delivers blows that are meant to inflict pain on defenders. In his pass sets, he is always looking for extra work and an opportunity to get extra contact with a defender.

Balance: Ingram has really good balance as displayed by his ability to work to the second level under control. When working a double team with a teammate, he has the lower-body control to come off the block and get to the second level under control, placing effective blocks. His balance also shows itself in his ability to pass off stunts when in pass protection, correctly moving from one defender to the other.

Lateral Mobility: Ingram has really good lateral mobility. The LSU run game has zone scheme principles that make offensive linemen have to move to out-leverage defenders and he does this really well. His lateral mobility is also on display in his pass sets. Ingram consistently showed the ability to adjust laterally to stunts and unexpected blitzers.

Hand Technique: In the run game, Ingram shows consistent inside hand placement. He is also deliberate in his hand replacement if they get too outside of the defender’s frame. In pass protection, Ingram can use improvements on timing shooting his hands. At times, he will shoot his hands too early and defenders are able to swipe them away and get past him.

Versatility: Ingram’s versatility comes with his combination of size, strength, and athleticism. Has the overall body mass to play guard but also has the length to play tackle. Throughout his evaluation, Ingram showed the strength to be a reliable run blocker and the quick feet and reactionary athleticism to be a dependable tackle in the NFL.

Pass Sets: Ingram plays with great patience in his pass sets. Has great spatial awareness to keep inside leverage to prevent defenders from being able to quickly win with inside moves. Ingram also has good lateral mobility that allows him to react to pass rushers’ counter moves. At times, he can let his momentum carry him to where he gets too much weight on his heels, which makes him vulnerable to a bull rush.

Flexibility: Ingram has good flexibility that allows him to be a fluid mover on the interior of the offensive line. Ingram is a good puller because his athleticism allows him to quickly get out of his stance and bend the corner to get to the defenders. His flexibility is also displayed in his ability to keep great knee bend while he is working to the second level. This flexibility is a big reason why he is able to deliver powerful blows because it allows him to stay in a great powerful stance.