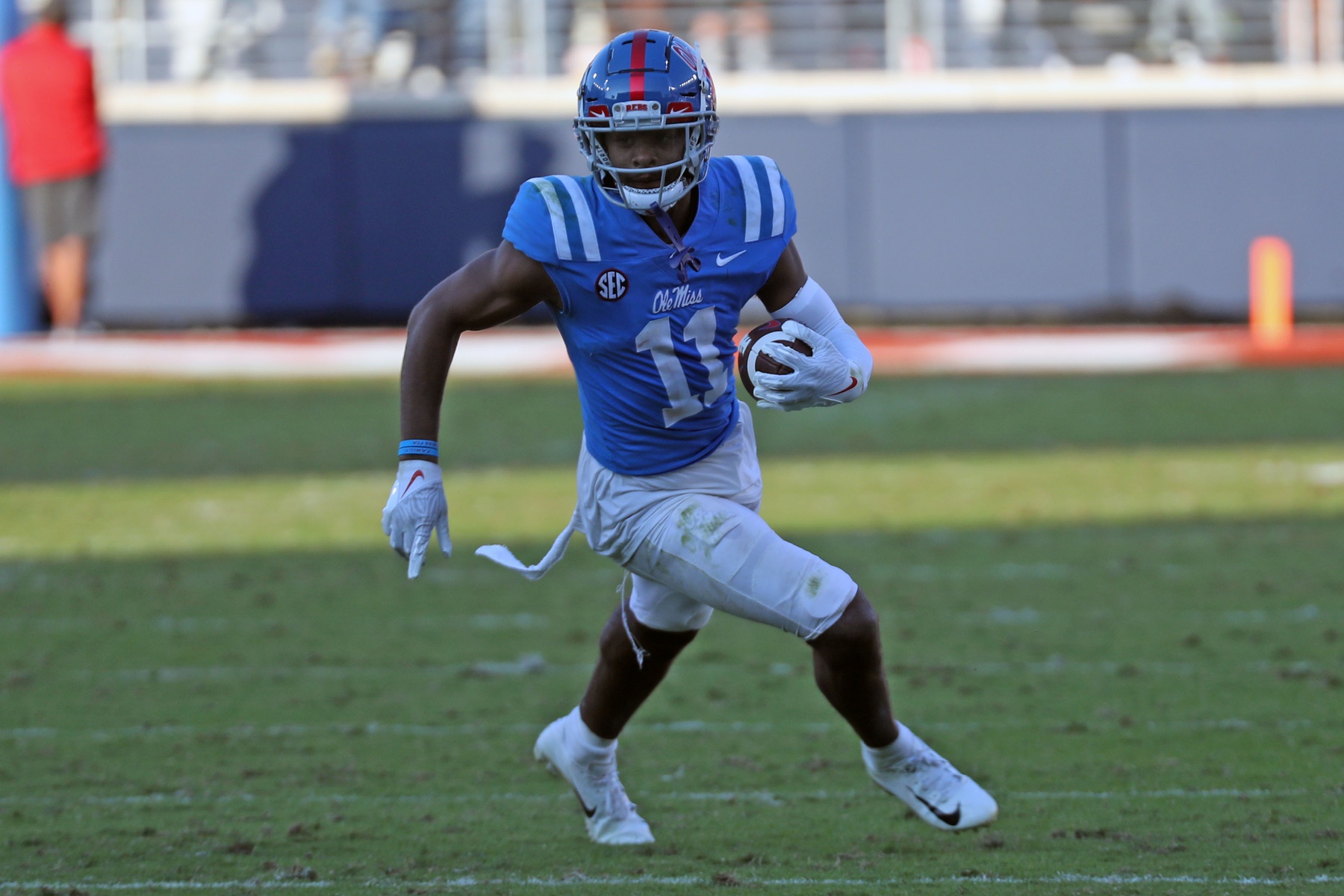 Drummond tracks the ball well in flight. He uses his frame and strong hands to out-leverage defensive backs and win positioning for the football. Good body control to shift his weight on poorly thrown passes.

Dontario Drummond is a former 3-star recruit out of Laurel High School. As a three-sport athlete, he played baseball, basketball, and football. Spent two years at East Mississippi Community College before transferring to Ole Miss. He helped win state championships with both football and basketball teams. Drummond will be a 25-year-old rookie next August. This could remove him from draft boards of teams that prioritize youth. He is a big slot receiver that rotates on the perimeter. His game is predicated on yards after the catch. He has the speed to get behind defenders on go and post routes. He faced a ton of off-coverage, leading to unrefined releases and routes. How will he handle physical press coverage at the next level? Can he adapt or will he need the same pre-snap motions and alignments to have success? Time will tell.

Route Running: Drummond rarely faces press coverage in Lane Kiffin’s offense. Drummond lacks a diverse route tree. He rounds routes instead of breaking at the top of the stem. There was a lot of movement pre-snap to create advantageous route spacing. Sees his share of screens, slants, and other schemed routes.

Hands: He does not allow the ball into his frame. Drummond has soft and reliable hands. He plucks the ball out of the air with full extension. Good hand-eye coordination to reel in difficult passes.

Separation: Drummond changes his pace midway through the stem. He has a good burst out of his route stem to generate added space, allowing him to maintain the separation he has created. Improving the technical aspect of route-running will improve his separation consistency.

Release Package: Mostly given free releases, Drummond is affording the opportunity to run at the snap without restrictions. He uses a speed or one-step jab release when aligned versus press.

Run After Catch: Drummond excels in the short and quick passing game. He is a threat to gain extra yardage after the catch. The combination of his 220-pound frame and burst makes him difficult to bring down in space. He uses good spatial awareness to identify where defenders are after the catch before making his move upfield.

Ball Skills: Drummond tracks the ball well in flight. He uses his frame and strong hands to out-leverage defensive backs and win positioning for the football. Good body control to shift his weight on poorly thrown passes.

Football IQ: Drummond has a good understanding of zone concepts. He finds the soft spot and makes himself available to his quarterback. His routes are run either to or beyond the first down markers. Due to the manufactured touches and advantageous alignments, concerns are raised if he can process post-snap coverages.

Versatility: The majority of Drummond’s offensive snaps are from a slot alignment. He has lined up in the backfield, out wide, and in-line as an H-back. Limited snaps (32) on special teams in 2021.

Competitive Toughness: Drummond competes in all three phases, offense, defense, and special teams. When placed in-line, he works hard to seal defenders in the run game.

Big Play Ability: Drummond can create big and explosive plays. He creates big plays with his run after catch abilities. On deep routes, he can stack and outrun DBs to generate explosive plays downfield.