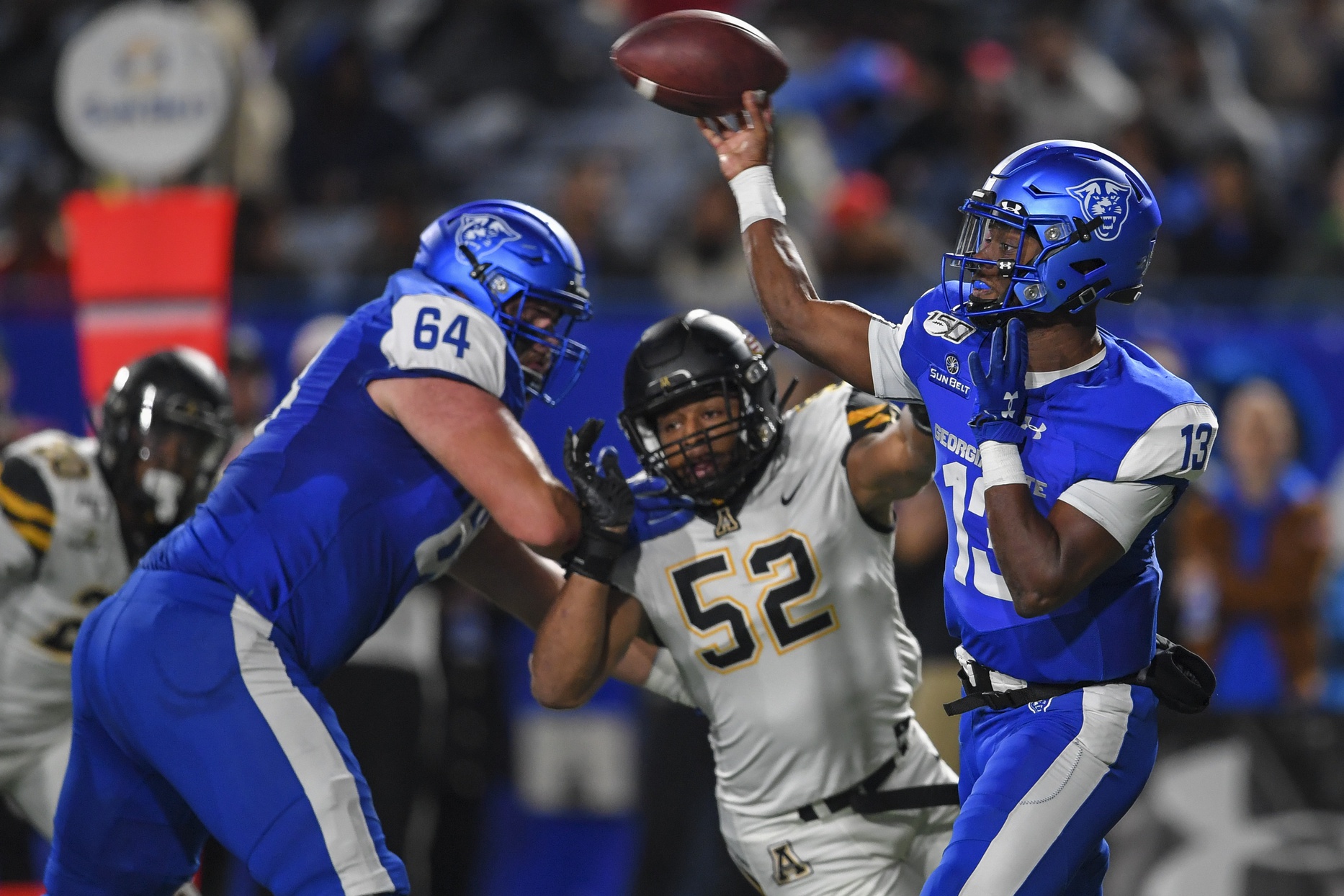 Jackson is a physical player in the box that seeks to wrap ball-carriers up and bring them to the ground. Jackson has enough power behind his tackles that when he lines up ball-carriers properly, he delivers a knock-back blow that results in them going backward. In the open field, Jackson struggles to break down to execute the tackles This results in him overrunning the ball-carrier at times or he launches at the ball-carrier in what ends up being an inefficient attempt at the tackle.

Jackson shows a high level of understanding at the inside linebacker position when playing the run. Jackson shows good ability to read his keys and diagnose plays. He makes a high number of tackles around the line of scrimmage because he can quickly get moving downhill toward the line because of his ability to quickly read the offensive play.

D’Marco Jackson is the starting inside linebacker for Appalachian State. Jackson redshirted his freshman year but since that time, Jackson has seen significant playing time. Jackson has tons of experience and in-game reps, playing in more than 40 games. Jackson is a downhill linebacker that quickly reads his keys and pulls his trigger to make a play at the line of scrimmage. At Appalachian State, they like to blitz him and he has shown to be an effective blitzer. They will occasionally line him up on the edge of the line to let him provide a pass rush. Jackson is a high-effort player that gives max effort to chase ball-carriers down sideline to sideline. Jackson is an effective linebacker when playing inside of the tackle box but his limitations athletically start to show themselves outside of the box. Jackson is an instinctual linebacker that has some limitations athletically but should be able to be an effective linebacker in the NFL.

Pass Coverage Ability: Jackson was used primarily as a zone drop defender. In his zone drops, Jackson can get good depth and have a presence in the middle of the field. Jackson has long lower limbs and appears to have slight hip stiffness that affects his ability to cover receivers in man-to-man situations.

Run Defender: From C-gap to C-gap, Jackson is a good run defender. He can quickly diagnose plays and plays downhill to make the stop close to the line of scrimmage. Jackson will often blitz from the ILB position and can perfectly time up the snap to disrupt the play.

Block Deconstruction: Jackson has an array of moves that he uses to defeat blocks from the inside linebacker position. Jackson possesses good overall size and length that allows him to take on offensive linemen and shed them off of him. He can also use a quick dip-and-rip move to get under offensive linemen when he is trying to beat them to a spot. Jackson is an instinctual player that does whatever he needs to beat the block of the offensive lineman.

Lateral Mobility: When Jackson has to move laterally, it exposes some of his limitations as an athlete. Jackson is an efficient player when he has to play in the box, but when it is a play that involves Jackson playing outside of the box, his hip stiffness shows itself. When in sideline pursuit, Jackson gains an upright posture, and upon arriving to the ball-carrier, he struggles to break down and make a proper tackle. This issue makes Jackson an inefficient tackler outside of the box.

Flexibility: This player has good size and length but has a limited amount of athleticism. This limitation comes from what appears to be some stiffness in his hips. His flexibility does not affect him inside the box and allows him to be a good inside linebacker prospect.

Leadership: Jackson is an effective communicator from the inside linebacker position. He seems to have a good understanding of the defense and will help get his defensive linemen aligned in the right front.

Versatility: Jackson doesn’t have positional versatility but I believe that he has versatility in what he can do at the inside linebacker position. Jackson has deal size and length at the inside linebacker position and can be utilized as an effective blitzer. Teams that like to insert their inside ‘backers in on pressure situations will find Jackson’s blitzing ability to be a valuable trait.