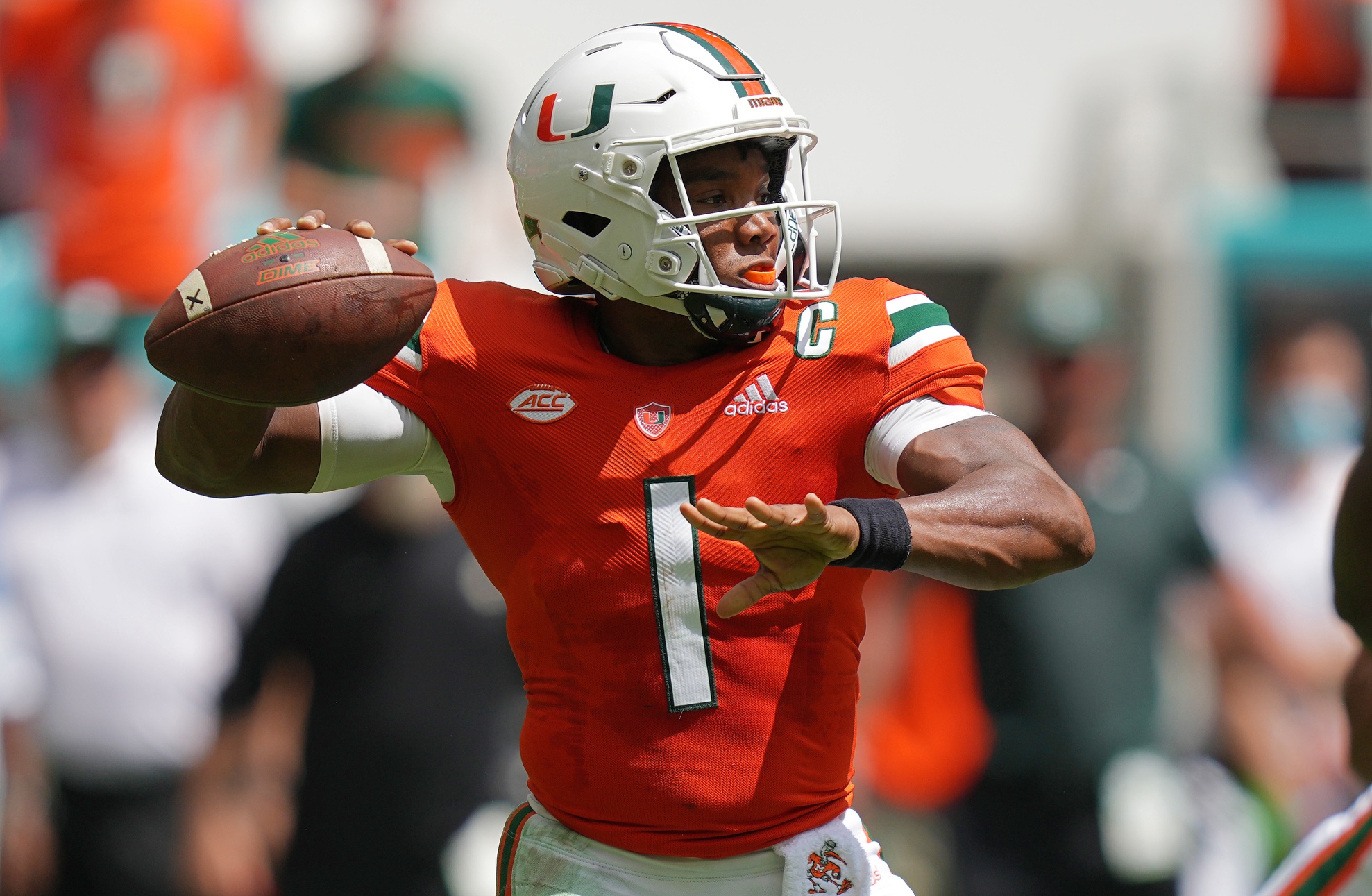 King has outstanding mobility and athleticism. He is quick and can make defenders miss in space while also having the speed to beat defenders to the edges. A true difference-maker with the ball in his hands, his playmaking talent will have some offensive coordinators intrigued by his ability as a wildcat quarterback.

Miami’s D’Eriq King has been a household name in the college football world for what seems like an eternity. King originally entered the college ranks in 2016 when he redshirted as a true freshman at Houston. A dynamic athlete and playmaker, King quickly took the college football world by storm when he stepped on the field. King was ultra-productive at Houston, finishing with 78 total touchdowns and 6,346 total yards of offense in just 22 games. King wound up transferring to Miami in 2020 where he put together an outstanding career in his two years as a Hurricane before suffering a season-ending shoulder injury after the third game of the 2021 season.

King is an undersized quarterback who lacks NFL-quality arm strength and accuracy. He is an outstanding athlete who is excellent at using his feet both in the passing game and in the running game. He is able to evade pressure within the pocket while keeping his eyes downfield. He is excellent at throwing on the run and displays good accuracy in that regard. When he is forced to throw in the pocket, he lacks the necessary touch, ball placement, and decision-making to win at the next level. As a runner, King displays outstanding quickness and playmaking ability. He can make defenders miss in space and has good contact balance as he is so compact. King’s intangibles are off the charts and there is little doubt that he can help an NFL team in some capacity, it just may not ever be as a starting quarterback.

Accuracy: King is a streaky thrower of the football with regards to his accuracy. He shows good accuracy in the short and intermediate areas of the field, flashing an ability to perfectly lead his receivers or put it right in the numbers. His accuracy begins to wane at the deeper levels of the field. Additionally, when faced with pressure, King will often drop his eyes and then quickly look up and try to get the ball off, but his accuracy is wild when he does this and this leads to many misses.

Decision Making: For the most part, King is a good decision-maker. He takes good care of the football and rarely puts the ball in harm’s way. That being said, King is a confident player and often pushes the envelope too much with regard to him fitting the ball into tight windows. These attempts will lead to interceptions as he doesn’t have the velocity to riffle the ball in those windows.

Poise: King has good poise in the pocket. He has excellent pocket movement skills and he has some very fun plays of him making defenders look foolish when they try to square him up. He has good instincts and awareness in the pocket and can naturally feel pressure. There are times when he attempts to play hero ball and holds onto the ball too long in the pocket when he should escape or throw the ball away.

Progressions: King has shown an ability to make full-field progressions when given time in the pocket. However, King is rushed by pressure and will panic and force the ball to his primary read. There are times he locks onto his No. 1 option and forces the ball even though other outlets are open. You don’t see many anticipatory throws from King and he is more of a thrower than a passer.

Release: King has a quick and compact release that allows him to get the ball off efficiently. That being said, because of his height, there are a lot of tipped balls at the line of scrimmage and he needs open throwing lanes in order to get the ball to his desired target. He also has an ability to make throws from different arm angles, which helps him overcome his diminutive stature.

Arm Strength: King has above average strength overall. He flashes good arm strength in the short and intermediate areas of the field but his deep ball will often fall to the ground before reaching his target. He lacks the top-end velocity to fit the ball into tight windows as well.

Leadership: There is little doubt that King is an outstanding leader. After transferring to Miami, he instantly became the leader of the football team and all of his teammates would rally around him. He has full command of the offense, gets the offense in the right play, and his coaches have full trust in his ability as a field general. His intangibles are special and I would not bet against this player being successful in some capacity.

Mechanics: King could stand to improve his overall setup as a thrower. He throws from a narrow base at times, limiting the amount of velocity he can generate from his throws. His footwork is inconsistent and he will fail to fully rotate his hips and follow through with his motion, which hurts his overall arm strength.