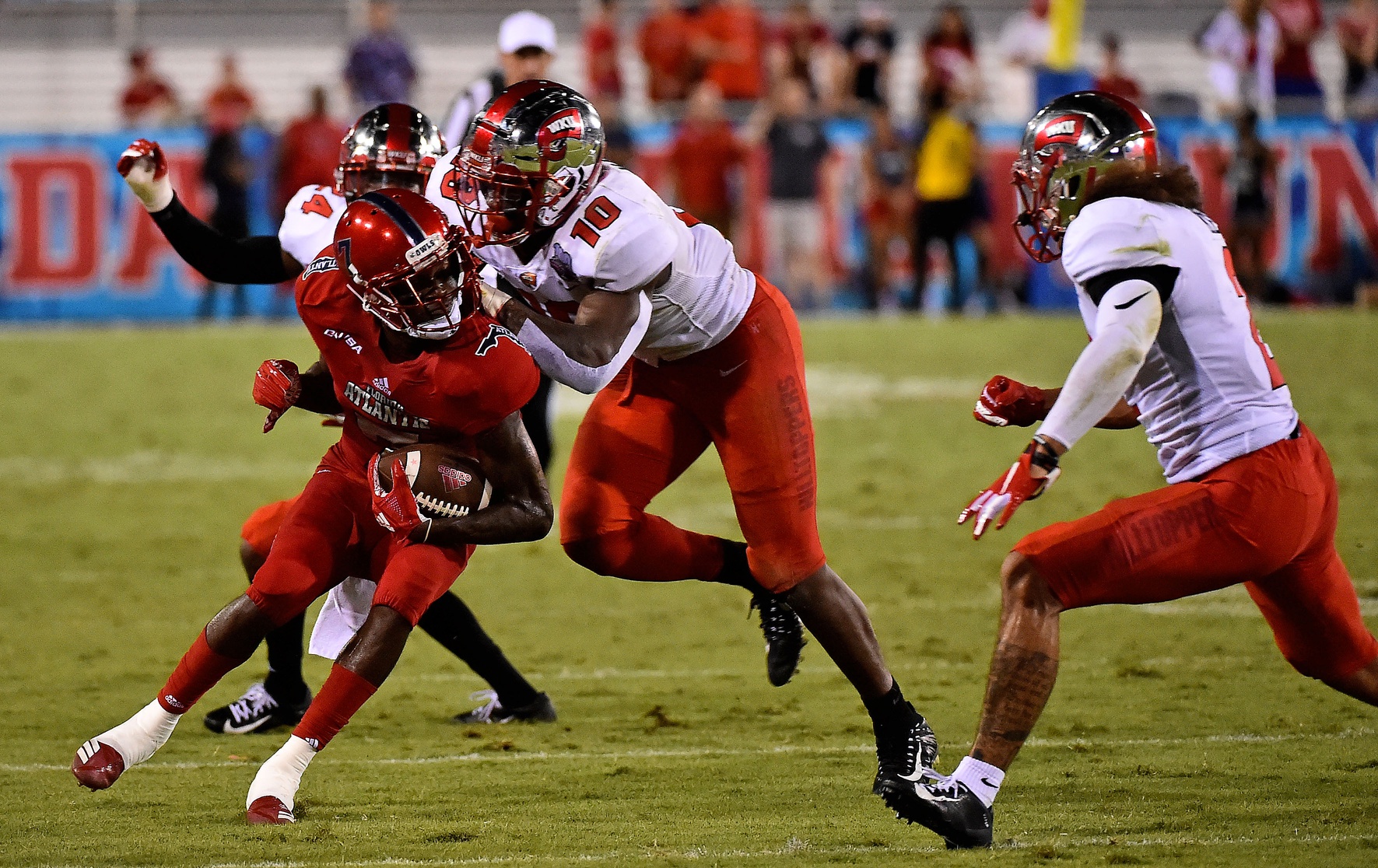 Malone is quick and explosive off the snap, especially in obvious passing downs. He is quick-twitched and can explode off the line, threatening the edges of the tackle in a hurry.

A loose and fluid athlete, Malone displays the necessary flexibility to win both as a rusher when he is trying to bend the arc or when it comes to contorting his body and slipping through gaps in the run game. He displays very good ability to reduce his surface area and bend the corner while also possessing the necessary ankle flexion to turn tight corners.

A high-energy player who is relentless when rushing the quarterback, Malone has very good effort overall. You’ll see Malone chase plays down in pursuit and works down the line of scrimmage laterally to clean plays up.

Western Kentucky’s DeAngelo Malone is an exciting edge prospect who has been incredibly productive over his five-year career with the Hilltoppers. The C-USA Defensive Player of the Year in 2021, Malone has been extremely disruptive off the edge, recording 88 tackles, 16.5 TFLs, and eight sacks. Malone plays defensive end for the Hilltoppers, playing predominantly out of a two-point stance as well as with his hand in the dirt. He has excellent overall athleticism with speed, burst, and quickness. He is explosive off the snap as a pass rusher and threatens the edges in an instant. A very loose and agile athlete, Malone shows an ability to corner and flatten to the quarterback with very little difficulty. He flashes the ankle flexion to turn tight angles and can reduce his surface area around the edge to bend the arc. A high-motor player, Malone plays hard and hustles to the football with impressive closing speed.

Malone is a long and lean football player with a very narrow frame. While he is able to use his length to his advantage and maintain distance between he and opposing blockers so that he can disengage and make the tackle, his overall lack of mass and strength severely hurt his ability to be a productive run defender—especially since he plays on the ball nearly 100% of the time. Tackles can easily absorb his punch and bull rush and can quickly move him out of gaps and maul him. He does show quickness to evade blocks and his narrow frame allows him to be slippery in the run game, but if an offensive tackle can square him up, it’s good night. Malone is rarely asked to play off the ball and play in space, but based on his strength limitations that will likely be what he is asked to do at the next level. He does show the necessary athleticism and instincts to succeed off the ball but is entirely a projection in that regard.

Ideal Role: Sub rusher for 3-4 based team with upside to develop into an every-down player.

Hand Counters: This is an area where Malone can certainly stand to work on. He lacks any sort of rush plan and primarily wins using his sheer explosiveness, length, and ability to bend. If he can develop a plan and hand counters, his game will only ascend.

Length: Malone is a long and lean edge defender who knows how to use his length to his advantage. He has long levers and is able to keep his body clean by locking out his arms, allowing him to move freely. His long arms are an asset as he finishes at the quarterback and when it comes to making tackles in the open field.

Hand Power: This is a major weakness for Malone. He simply lacks power and pop in his hands and just isn’t the type of player who can strike and jolt tackles back. A finesse player who primarily wins with speed and quickness, Malone has yet to show an ability to win with power.

Run Defending: Malone is a much better run defender when the play is opposite side and he can pursue cleanly and make plays due to his quickness and speed. He struggles to set an edge and will get moved out of gaps by bigger and stronger offensive tackles. To Malone’s credit, he does show an ability to slip and evade blockers, but that will be much more difficult going against better athletes at the next level.

Football IQ: Malone has good overall football IQ and instincts. He recognizes run and pass very well and is quick to sniff out screens. He could be better when it comes to setting up tackles with hands and body fakes, but overall he is a smart player.

Lateral Mobility: An excellent athlete with very good lateral agility and change of direction, Malone profiles as a player who could excel playing in space if given the opportunity. He shows an ability to work down the line of scrimmage with good speed and urgency. He can stop and start when chasing the quarterback, displaying very little wasted movement.

Versatility: He is a bit of a projection at the next level. He primarily played defensive end in college, playing on the ball almost every snap. He will need to play stand-up outside linebacker in a 3-4 defense if he has a shot at a full-time role. He didn’t get enough reps in space and in  coverage to make me feel great about his projection as a full-time player.