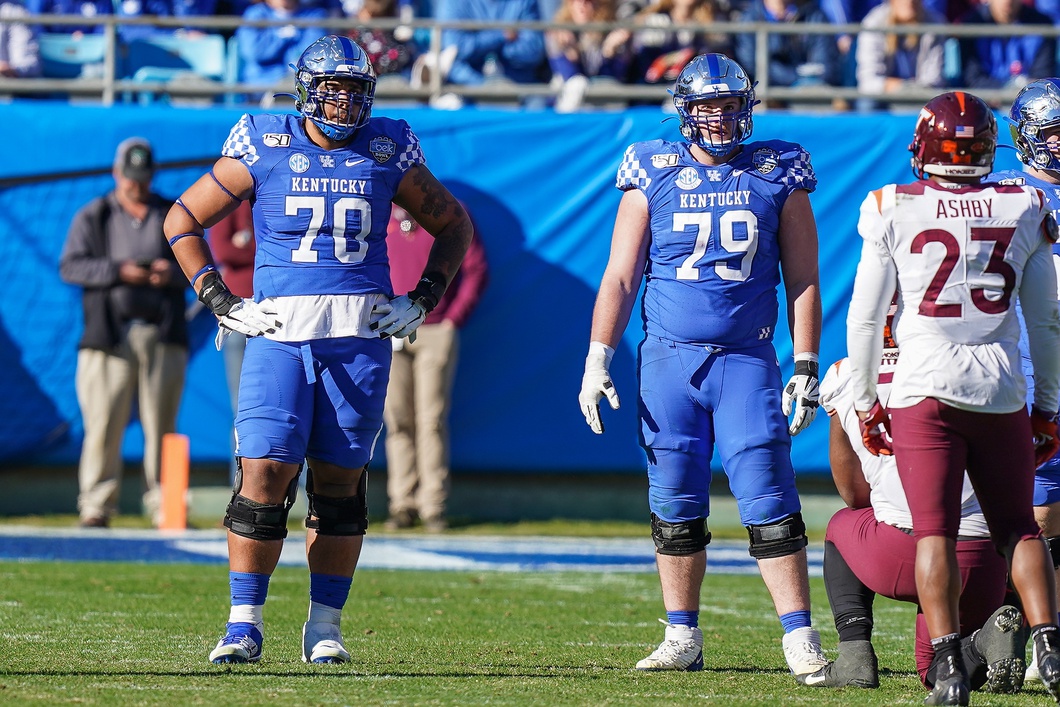 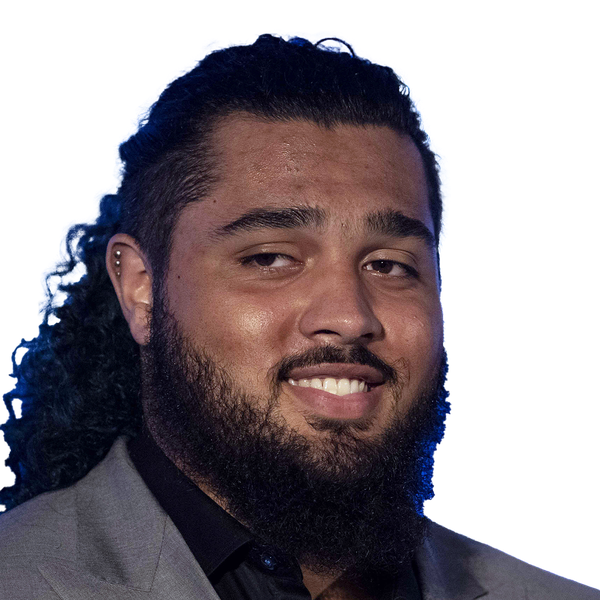 I'm gonna call it as it is...this is one mean dude.

His double teams and down blocks are ferocious and he’s rolled up one hell of a body count at Kentucky—he was credited with 47 knockdown blocks in 11 games during the 2020 season (another 32 in 2019 as a first-year full-time starter). Simply put, he puts guys on the ground and much of that success shines through when he’s firing vertically off the ball and running his feet. He’s overwhelming in the phone booth and if he’s able to secure the first blow, he’s usually got you in recovery mode for the rest of the rep.

Kinnard is a tenacious presence as a blocker at the point of attack.

He offers good urgency as a drive blocker and his second effort to maintain his forward progress or run defenders off the spot creates a lot of room to work on the edge. Putting him in tighter spaces should only further amplify this portion of his game and I’m encouraged by how often Kentucky was able to run off his hip that he can continue to be a focal point of the running game at the next level. He’s got that brute mauler mentality at his disposal and should be a tone-setting part of an NFL running game.

More fluid laterally then you’d expect for someone of his stature.

He’s got some silky transitions to slide along the front or close the door on a double team. When he’s got leverage on a defender and the gap in question, he has shown the ability to transition through that contact and sustain or widen the lane. As an outside blocker, his ability to get depth and width in his sets is only modest and nowhere near as appealing as his work in the run game, which is why I’ll continue to like him more inside where his set can be shorter and less stressed vertically.

Kentucky offensive lineman Darian Kinnard projects best in as a guard at the NFL level with the kind of functional power necessary to be a tremendous asset in the ground game. Kinnard has played right tackle throughout the course of his tenure with the Kentucky Wildcats program and although he appears to have the necessary measurables to continue playing on the outside in the NFL, I do believe that his skill set would be best optimized inside where he’s given tight angles and alignments.

The Wildcats’ offense featured a significant change in style ahead of Kinnard’s final season, but throughout the course of his tape, the volume to true pass sets he’s taken on the perimeter has been relatively lean and I’m plenty confident that the short sets and RPO blocks he’s taken will transfer well on the inside. Despite being a long-tenured starter, Kinnard is someone I see benefitting from additional coaching in fundamentals to help him optimize his punches and consistently maintain his blocks.

This is a viable starter in a gap/power-heavy system but he’s also got the functional athleticism to play in zone schemes and I appreciate his mobility despite his size. If you’re willing to work with him through the growing pains of a potential transition inside and are ready to brush up on some of his hand usage, you could be walking away with a quality, impact starter at guard.

Balance: For his stature, he’s admirably mobile and fluid but that does come at a cost when accounting for some of his fundamentals—he can be a bit all over with his center of gravity at times and his balance is something that can be compromised as a result. I would love to see him play a little more within himself and trust his natural body power to create the results he’s looking for. I don’t feel like he needs to sell out to be a tone-setter but he’s a little overactive and savvy defenders can work through his hands and break down his frame.

Anchor Ability: The natural power and strength Kinnard offers has plenty of weight below the waist to have the needed ability to sit down on power rushes. The Georgia game was a good showcase of how his losses at the point of attack are still usually stalemates. With his size, you didn’t see many rushers try to bull him and test his ability to catch power conversions and I’d expect that trend to continue in the pros.

Hand Technique: Kinnard’s punch timing and placement linger as my biggest primary question regarding his resume and transition to the next level. Without better accuracy and consistency with his punch, I’m not overly confident the teams that want him to work at tackle are going to find success with him; far too often his first strike lands wide and doesn’t offset push from defenders. This is a recipe for hardship on the edge if he’s left outside (or inside for that matter), and because of his raw size, he’ll let defenders work under his frame and strain his ability to recover and recollect control of the block as a result. If he grows here, he’s capable of being a dominant player in the trenches.

Football IQ: This is a highly experienced player with 3+ years as a starting tackle in the SEC. That alone is sure to grab the attention of some coaches and decision-makers. I do wish he showcased a little more fundamental polish to go with all the reps; that discrepancy is contributing to my conviction to play him inside where things happen faster but the range he’ll need to showcase isn’t as dynamic.

Versatility: The experiences he’s collected at offensive tackle throughout the course of his career at Kentucky will come in quite handy for building as big of a resume to as many teams as possible. He started three games at left tackle in 2018 as a true freshman, leaving him with experience to tap into on both sides of the line of scrimmage and potentially leave him as someone capable of playing four spots along the offensive line if he lands somewhere that shares the vision of playing him on the interior.

Pass Sets: The Kentucky offense hasn’t been one that has featured a lot of traditional drop-back passing and as a result, his pass sets versus speed rushers haven’t shown a lot of consistency in his angles and framing. I did think the LSU game showed his pass sets best and gave me inspiration that there’s room to grow here if he’s left outside, but ultimately leaving him inside where his lateral mobility can shine in shallow jump sets makes a lot more sense.

Flexibility: The raw size and mass of Kinnard hasn’t yielded an overly rigid player, which is a nice surprise given his frame. He does show good hinges in both a linear and three-dimensional light—he’s not heavy-footed and doesn’t struggle to open his hips to work overtop or inside of blocks. He does play a little high at times, however, although I do think that comes when his set points and landmarks are stressed.