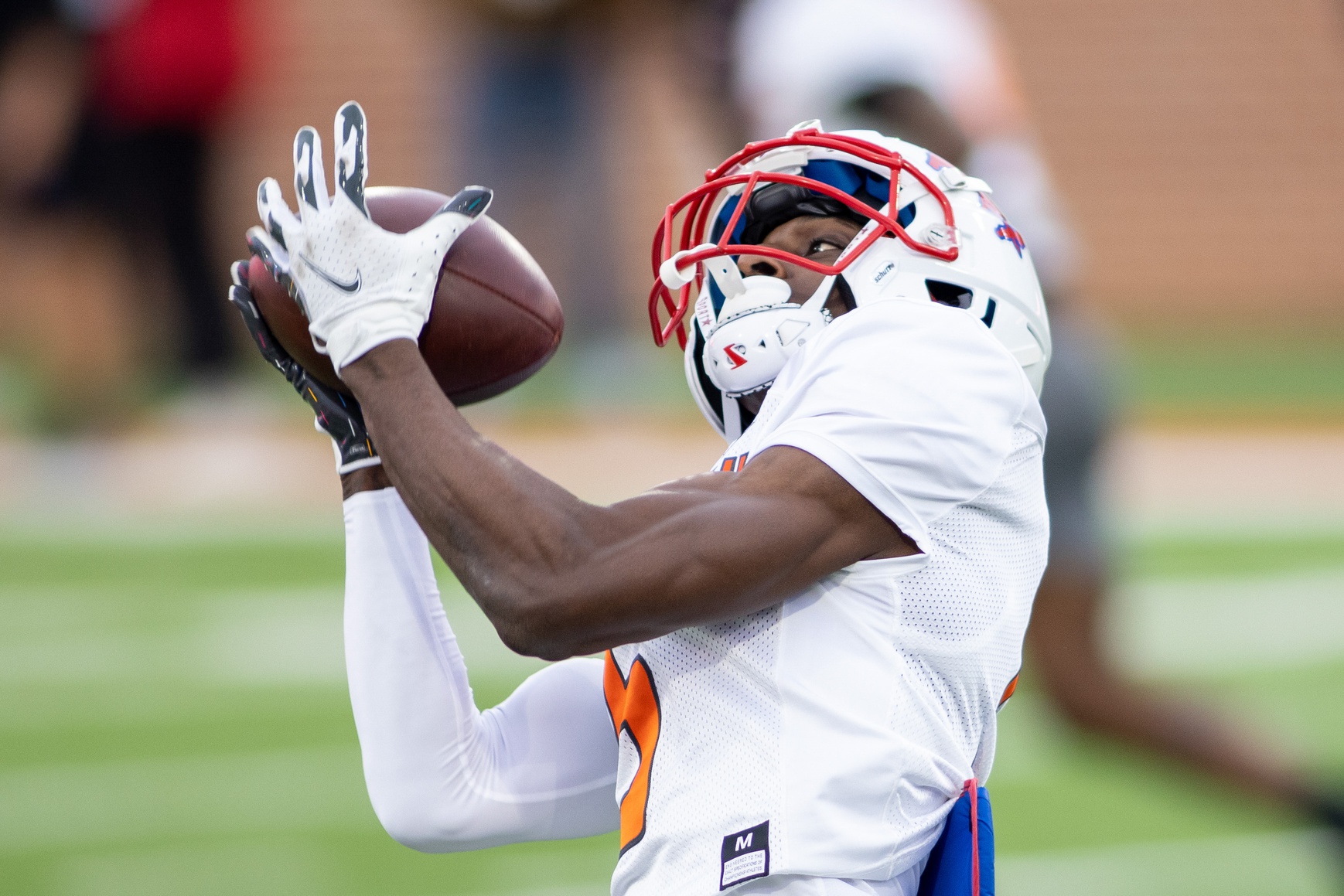 Gray has been highly productive after the catch and the SMU offense affords him favorable chances to run and catch. He found massive chunks of yards catching the ball in stride on shallow crossers and he has the speed/burst to break pursuit angles. SMU also got him the ball on quick screens where his ability to accelerate and play off his blocks led to steady production.

Gray’s speed and ball skills combined with his ability to win after the catch makes it fair to call him a big-play guy. He averaged more than 16 yards per reception in 2021.

Gray has good spatial awareness and understanding of how to take advantage of the SMU offense to find production. With that in mind, there will be notably more on his plate at the next level in terms of his route tree and technique required to get open. He was exclusively a right side of the formation receiver at SMU in static alignments.

Danny Gray was a top JUCO recruit with opportunities to play in the SEC and Big 12 but opted for SMU where he became a productive option in the wide-open Mustangs’ passing game for two seasons. Gray is an explosive playmaker that thrived within the spacing of the SMU offense, taking advantage of built-in leverage where his ability to run away from defenders led to big plays. He makes terrific route adjustments to zone and found notable production on shallow crossers, nine routes, and quick screens. Those routes enabled Gray’s best qualities in terms of speed, ball skills, and spatial awareness to shine. While Gray has the appeal of a big-play receiver in the NFL, he does have quite the transition ahead of him. There will be notably more on his plate at the next level when it comes to route tree, alignments, and overall technique. Given he has no special teams experience in college outside of a few opportunities in the return game, proving himself on special teams as he refines his game at receiver will be important for him to build upon his appealing qualities to become a more well-rounded player.

Route Running: Gray was only tasked with a limited route tree at SMU and he did well to make sound adjustments to zone coverage while creating leverage and running away from defenders on the horizontal plane to get open. There is room for improvement when it comes to deception and finding ways to sell breaks and utilizing his separation quickness at the top of routes. A lot of the leverage he was able to take advantage of was created by the scheme.

Hands: Gray’s hands and technique catching the football are inconsistent. While he has some high-level moments of plucking the football away from his frame, there are other instances where he is a body-catcher that guides the ball into his frame. Drops were an issue for him early in 2021.

Separation: Gray was able to separate at SMU often due in large part to the scheme with the spacing and leverage it creates. Given his explosiveness, I came away underwhelmed at times with his separation quickness at the top of routes. He has the traits to become a great separator but he has to develop more route-running technique against man coverage.

Release Package: When Gray is afforded a runway, he quickly eats up turf and utilizes it well to set up his route. When corners play up in his face, he is reliant on footwork to manipulate them and clear his path. There is room for him to develop more in terms of his overall package and technique for beating press.

Ball Skills: My exposures did not reveal issues with ball tracking and he made excellent adjustments to the ball in the air. He’s made his share of catches in traffic, but contested catches won’t be his calling card at the next level. He checks the box.

Versatility: Gray has appeal at multiple levels of the field with his blend of speed and ball skills. While none in 2021, Gray had nine kick returns and four fielded punts back in 2020. Otherwise, he has no special teams reps, so he’ll need to prove himself in that area.

Competitive Toughness: Gray is more of a finesse player and won’t wow with his physicality. He is a positional blocker that doesn’t exactly bring the fight. I do like the competitive toughness he showcases with the ball in his hands and at the catch point.