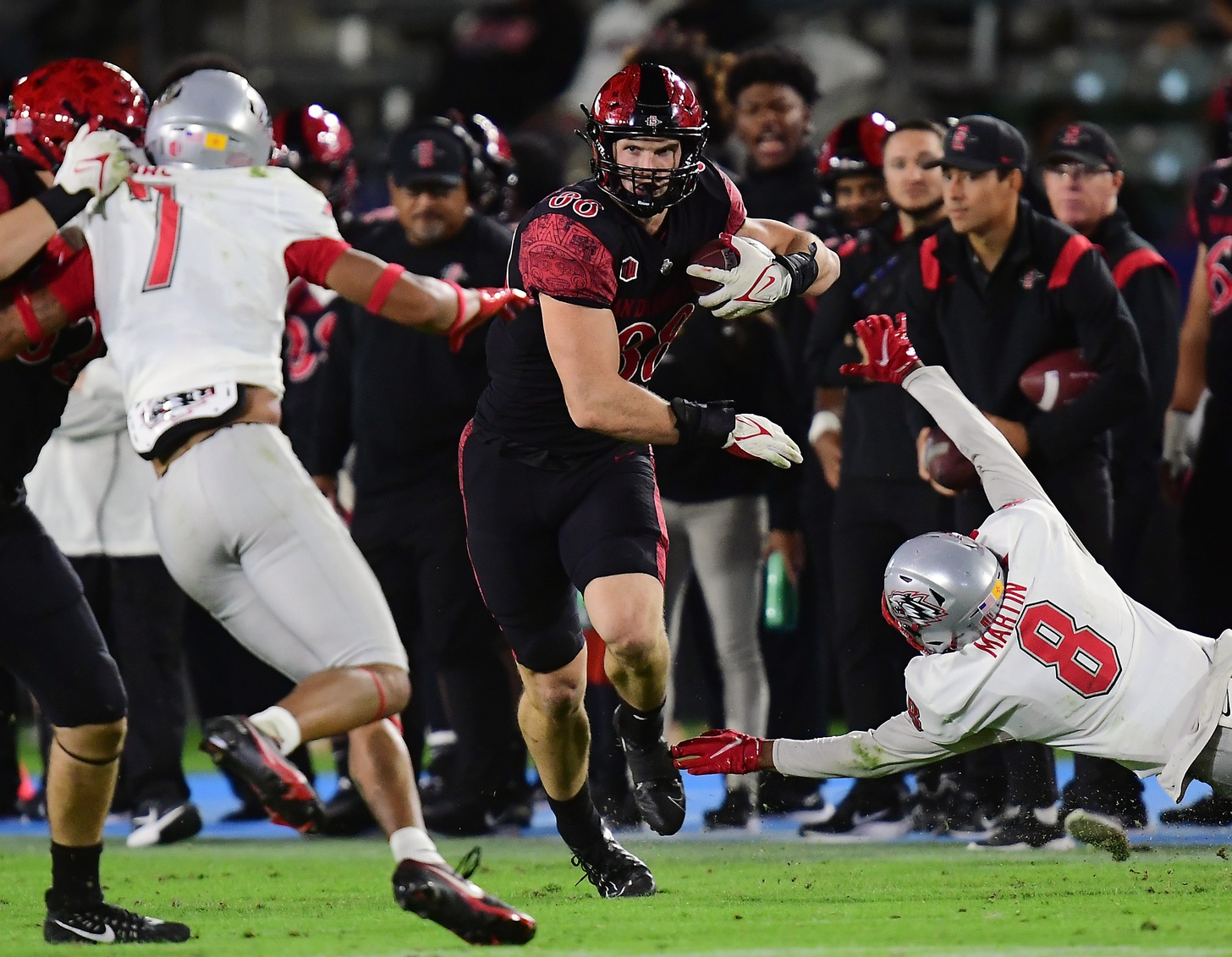 He displays good blocking skills, particularly in the run game when he is in-line. He has some nastiness to him and is physical at the point of attack. He also does a good job engaging in space.

Daniel Bellinger aligns in-line as a Y and flexed out as an F. He is a sufficient-level athlete with regards to overall speed, quickness, and agility. In the run game, he has moments of being a dominant in-line blocker. He is physically tough, has good length, and does a good job blocking in the run game. He is athletic enough to get to cut-off on the backside and can engage at the second level. In the passing game, he isn’t a dynamic threat but has redeeming value in his size, catch radius, and blocking ability. He isn’t a great separator as a route-runner but shows good natural hands as a pass-catcher. He has a good catch radius, is a big target when catching seam routes, and will absorb contact. In the NFL, he would be best served in an offense that runs sets with multiple TEs.

Scheme Fit: Any offensive scheme that uses a lot of 12-personnel

Hands: He is a good natural hands-catcher. He catches the ball without allowing it into his frame. He also has good catch radius and length for the position.

Route Running: He’s not a great route-runner. Creating separation at the top of the route isn’t his strength. However, he has a very good catch radius and strong hands in contested-catch situations.

Versatility: He has some versatility for the position. He has aligned both in-line as a blocker and flexed out as an F. Aligning at F isn’t his strongest suit, but he has experience.

Competitive Toughness: He is a nasty run blocker who shows some competitive toughness as a finisher. He is a physical in-line blocker and shows competitiveness in contested-catch situations.

Ball Skills: He demonstrates adequate ball skills for the position. He displays the ability to track the ball in the air, especially on seam routes. He has good hand-eye coordination to secure the catch.

Football IQ: As a pass-catcher, he displays good football IQ. He rarely runs into zone coverage underneath and understands when to sit his route down. He can also identify blitzers off the edge when he is in pass pro.

RAC Ability: His RAC ability will not be an area of strength. He doesn’t have elite agility nor is he elusive in space. He has some straight-line speed, but escaping tacklers will not be a strength of his.

Pass Protection: He demonstrates the competitiveness and toughness to be good in pass protection. He also has the length to lock-out on defenders. This is a player who can stay in and max protect with ease.

Big Play: He is not a big-play threat with the ball in his hands. He doesn’t have elite speed to be a long-ball threat in the passing game, either. He is more of a possession receiver when he is a pass-catcher.