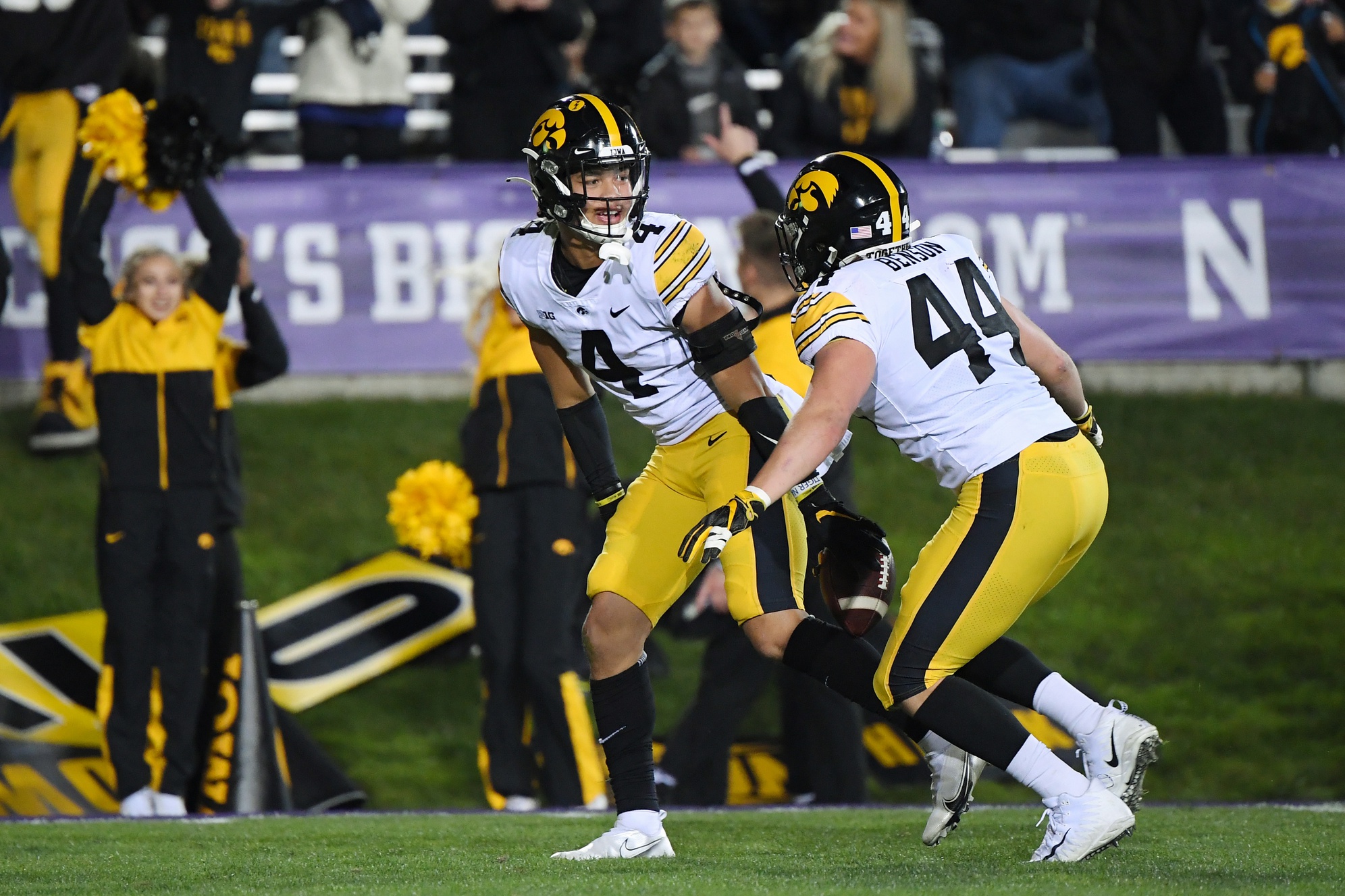 I think this is the easy pathway for Belton to make an impact as a rookie. He’s got good enough speed, enough physicality, and his ability to fit the run will complement his skills in negotiating and attacking blocks on the coverage units.

Belton isn’t the biggest defender but he appears to be a largely efficient tackler. He missed a handful of opportunities against Michigan against players that challenged his size. I don’t consider him to have a huge wingspan and surefire wrap-up ability, but he takes good angles and effectively brings force through contact to help finish tackles.

Iowa safety Dane Belton projects as a rotational safety and subpackage defender at the NFL level. Belton boasts the size of a traditional strong safety but his role in the Iowa defense has been primarily as a nickel defender charged with playing a pseudo-linebacker role and taking reps on the hash in zone coverage. Belton is at his best getting involved in run fits and playing in the shallow areas of the field as an add-on who can zone up shallow spaces if needed on passing downs. Belton leaves Iowa with eligibility left on the table but it is hard to blame him for such a decision when he logged five interceptions in 2021 to go along with his big hits and ability to fill against the run. For a subpackage player, I do feel as though this is a calculated decision—and a wise one. There’s plenty to like in Belton’s game so long as you don’t charge him with being anything that he’s not, such as a single-high free safety or someone who plays a lot of man-to-man coverage in the slot. I’d look for Belton to get his name called as a special teams contributor and subpackage defender early on day three of the 2022 NFL Draft.

Ideal role: Third safety with run fits and inside the 20 responsibilities

Football IQ: Belton took some big steps forward in anticipation and ability to make impact plays. I like the decisiveness he fits the box with when needing to step down. I don’t think he’s overly diverse as a coverage option but as a hook/curl defender and someone who can green-dog when backs or TEs add onto protections meshes really well with his traits.

Versatility: As far as ways to get him on the field, I like his projection as a special teams player and working on the kick coverage units. I don’t necessarily see a full-time defensive role but teams that implement big nickel should find his potential enticing as the third safety. Keep him in zones and attached to the box in order to play within his means as an athlete.

Range: I don’t think he projects favorably with a bigger area of grass to cover. I don’t foresee him taking on deep zones or serving as a deep half or deep middle defender. His ability to step down and squeeze from the nickel in run fits is much more impactful.

Ball Skills: Five interceptions this past season is hardly something to turn your nose up to—he did well when afforded opportunities to finish plays and convert. He logged two turnovers against Northwestern this year but his total ball production seemed to be evenly distributed across games—this wasn’t a fluke performance. That said, I don’t think his NFL standards of ball production will shine unless he’s combating the catch point.

Run Defending: He sees opportunities to step down and get into his gap well; this is an area where I’d trust him to be effective. Iowa positioned him overtop of tight ends in heavy sets and put him into the fit. His tackling was effective and he did well to attack blocks against skill players and uncover.

Functional Athleticism: I don’t think that Belton is a high-level athlete in space, but if you find ways to play him on the second level and inside of 15-20 yards in zone, you’ll have plenty at your disposal. He lacks high-level burst but can make up for it with anticipation and identification of plays to commit early in the play.

Competitive Toughness: I did think there were a handful of opportunities (like a long run to the far sideline vs. Michigan) where his rally skills could have popped a little more on tape. But he plays aggressive, he doesn’t back down from physical contact, and he is undeterred by bigger bodies in the frame. He does well to collision at the catch point in his efforts to dislodge the football.

Flexibility: His range of motion appears to be something I’d consider to be a limiting factor in his explosiveness. He does not appear to have the dynamic base or rotational flexibility to open and create suddenness at steep angles.